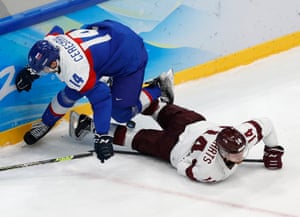 Curling: The Brits set up a stone in the house and a couple of blockers, but a good shot from Denmark uses some ricochets and clears out everything. No stones in play with seven to come. The second end winds up being a blank end, no score.

Ice hockey: Slovakia wins over Latvia 5-2 in the end, with five individual scorers as well. Neither will advance though, Sweden and Finland already have the group wrapped up.

Curling: A good start for GB, scoring two points in the first end to lead.

Curling: We’re about to start, in the women’s round robin match. Great Britain will shoot last in the first end. That sentence makes no sense anywhere outside curling. Eve Muirhead, Vicky Wright, Jennifer Dodds, and Hailey Duff are up against Madeleine Dupont, Denise Dupont, Mathilde Halse, and My Larsen.

Ice hockey: Here come the Latvians. Back to 3-2 in the third period with Slovakia having a player sent off for two minutes.

Ice hockey: Slovakia up 3-1 now over Latvia, with three goalscorers.

And of course, make sure to check out our picture gallery from day eight. Some great shots as usual.

Sean Ingle has the latest on the 15-year-old skater Kamila Valieva – as Barney Ronay pointed out, if she is found to have used a banned substance, she’s a victim of abuse rather than someone to be vilified.

This should be your first stop on every Olympic day: Martin Belam’s daily briefing.

Time to catch up with the Guardian coverage from Beijing. As someone who has just spent the southern summer covering cricket, this British angst feels slightly familiar.

Right now, not much. Slovakia are playing Latvia in the men’s ice hockey Group C match, and the wily Slovaks lead 2-1 in the second period.

6:05am: Women’s curling round robin matches, including Great Britain v Denmark and the USA v Sweden.

7am: Men’s 5km cross-country relay, and the medal-deciding run of the men’s giant slalom.

8:40am: Finland and Sweden in the men’s ice hockey Group C match. Then at 1:10 pm we’ve got China-Canada and USA-Germany from Group A.

11am: Women’s aerials qualifiers, should be spectacular.

Hello, ice to see you! Welcome to the Winter Olympics action once again. It is day… nine, maybe? I don’t know, my dreams are a blur of the sound of blades on ice. Everywhere I look, all I see are Austrians flying down hills. Plenty more medals up for grabs today for those who can keep their balance and hold their composure. Let’s jump in.

UFC 271 live stream: how to watch Adesanya vs Whittaker 2 online

UFC 271 live stream: how to watch Adesanya vs Whittaker 2 online