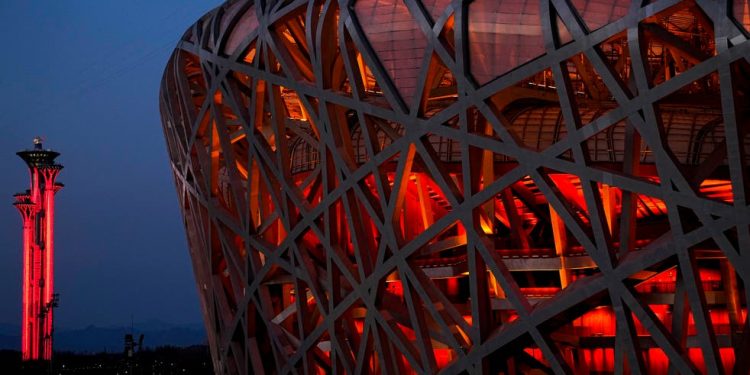 
The 2022 Winter Olympics will formally get underway with the opening ceremony taking place on Friday in Beijing.

The ceremony is taking place at the Bird’s Nest stadium, built and used for the 2008 summer Olympic games, as Beijing becomes the first city to host both editions of the games.

The stadium also served as the venue for Track and Field as well the men’s 2008 gold medal soccer game, but will not host any sporting events in 2022.

The opening ceremony will be directed by Oscar-nominated cinematographer Zhang Yimou, who directed the opening and closing ceremonies in 2008.

Chinese state television says that Zhang will use technology to create an “ethereal and romantic” event.

The parade of nations is expected to follow the same order as at Beijing 2008, with countries entering the stadium according the strokes used in the Chinese-language characters of their names.

Greece, as tradition dictates, will enter first as the first ever host of the Olympics, and China as the host nation will enter last.

Away from the ceremony, British curlers Jen Dodds and Bruce Mouat will take on Australia in the mixed doubles event.

Figure Skating also began on Friday with the Team Event, including the men’s short program, where American star Nathan Chen, 22, topped the chart as he set a new personal record of 111.71 while missing Japan’s Hanyu Yuzuru’s world record score by a tenth.

Nathan Chen of Team USA set a new personal record of 111.71 as he topped the chart in men’s single skating. He beat his 2019-20 Grand Prix final score of 110.38, while missing Japan’s Hanyu Yuzuru’s world record score by a tenth or so.

He was followed by Japan’s Shomu Uno, who scored 105.46 and Russian Olympic Committee’s Mark Kondratiuk securing third place with a distant 95.81 points.

So, the standings after one segment in the team event:

Strong winds delayed the second downhill ski training session of men on Thursday. While the session had been scheduled to start at 11 am Beijing, the organizers will decide on when it can start in the afternoon.

The world’s best skiers only got the chance to see the Rock course up close for the first time on Thursday. There is a third training session scheduled for Saturday before the men’s downhill opens the Alpine competition the following day.

Fireworks were released over the iconic Bird’s Nest stadium in Beijing on Sunday 30 January during a rehearsal for Friday’s opening ceremony.

The US, Britain, Australia, Canada and India are not sending the dignitaries to Beijing Winter Games as a part of a diplomatic boycott.

Elaborating on the reason behind the boycott, Canada’s Prime Minister said: “We are extremely concerned by the repeated human rights violations by the Chinese government.”

India has decided to stay away from the event following reports that a Chinese military commander who was involved in deadly clashes with Indian border forces in 2020 had been chosen as one of the Olympic torchbearers in Beijing.

Kosovo and Lithuania, whose relations with China have nosedived over their ties with Taiwan, are also taking part in the boycott.

Six German athletes tested positive on Thursday after arriving in Beijing on Thursday, taking the total Covid-19 cases in the team to seven.

”Three teams of Team D (Germany) are affected,” the Germany team said in a statement on Friday, without naming the people or sports teams affected.

“The team members are without symptoms and have been initially separated from the rest of the squad. There will be further PCR tests to confirm the results. The process from here on will be decided by the results.”

The other 78 athletes arriving on the same flight have tested negative.

Canada record a win against Switzerland in mixed doubles curling

Canada’s Rachel Homan and John Morris recorded a 7–5 win over Switzerland’s Jenny Perret and Martin Rios in the mixed doubles curling. The team began with a 4-1 lead against Switzerland with the latter bouncing back to reduce the winning margin but ultimately, the hat-tipped in the favour of the Canadians.

Italy continues with its winning streak on Friday scoring an 11-8 victory over Norway in the mixed doubles curling.

Sweden beat Australia by 7-6 in the mixed doubles curling event held at the National Aquatics Centre, with the latter falling to a 0-3 record at the Games.

The North Portico of the White House is illuminated red, white and blue to honor athletes representing the United States at the 2022 Beijing Winter Olympics and Paralympics on Thursday night in Washington DC.