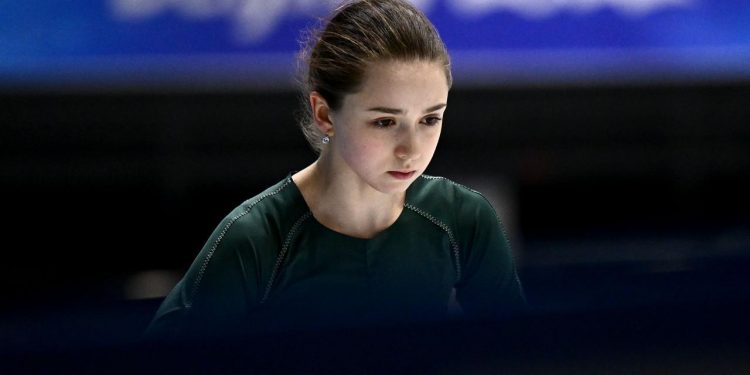 There has been a major development in the scandal that has left the Olympics in disarray with one star dropping truth bombs.

Australia has two very real medal-winning opportunities at the Beijing Olympics on a stacked day of action on Saturday.

Aussie Jaclyn Narracott has posted the fastest time in the women’s skeleton and may be just two runs away from winning the gold medal when the event resumes on Saturday night.

Australia’s mixed team snowboard cross stars, including Belle Brockhoff, are also expected to challenge for a spot on the podium.

There has also been immense drama away from the track with 15-year-old Russian figure skating superstar Kamila Valieva failing drug test.

In a Twitter thread, Rippon took aim at the Russian federation and the International Olympic Committee for putting Valieva, 15, in a bad situation and failing to properly punish Russia for previous doping violations.

Olympic testers have confirmed she failed a drugs test in December, and the IOC is now appealing against Russia’s decision to allow her to continue competing in Beijing.

Valieva tested positive for a banned substance after leading Russia (which is competing as the Russian Olympic Committee) to gold in the team event.

The medal ceremony was pushed back as a result, and Valieva’s status for the individual event, in which she is a heavy favourite, is in doubt.

“This young girl is just 15. She’s a minor. The adults around her have completely failed her. They’ve put her in this awful situation and should be punished.

“The IOC’s ban on Russia’s participation in the Olympics was NOT strict enough. I believe that the ROC athletes are doing what they’re told in an effort to please their coaches and federation. I blame those in charge. Flops.”

Valieva’s positive test is from Christmas Day for Trimetazidine, a drug used by heart patients that improves blood flow and stamina. The ROC has stood by her, saying the failed test shouldn’t apply since it was outside the Olympics.

The situation is further complicated by Valieva’s age. She is viewed by the World Anti-Doping Agency as a “Protected Person,” which means she could avoid suspension by being ruled too young to know what substances she was given.

Valieva has been allowed to practice after Russian officials appealed her suspension. The case will be heard by the Court of Arbitration for Sport in Beijing.

“Testing negative now doesn’t negate the fact that there were performance enhancing drugs involved in the process. It’s a f***ing shame. It doesn’t need to come to this. SHE IS A CHILD. They put her sport performance ahead of her health and well-being. F*** them. They’ve ruined this Olympic experience for HER and for EVERYONE here.

“The ROC has miserably failed its athletes and embarrassed themselves on the world stage YET AGAIN. My heart breaks for the Russian athletes competing in Beijing who will have everything they do at these Olympics questioned.”

Valieva holds nine world records and became the first woman to land a quad jump at the Olympics on Monday.

‘Should be arrested’: World blows up over halfpipe scandal

There was outcry in the men’s thrilling halfpipe final before Japanese superstar Ayumu Hirano walked away with the gold medal — ahead of Aussie silver-medallist Scotty James.

Hirano pulled out something special in his second run, completing a spectacular frontside triple cork 1440 to become the first person ever to land the trick at an Olympics. But one judge only gave him a score of 89, dragging his overall score for the second round down to 91.75 and leaving him in second position, behind James heading into the final runs of the event.

Viewers couldn’t believe the assessment and American snowboarding legend Todd Richards was absolutely scathing in his analysis of how Hirano was treated.

“Ahhh what? What? Is there a mistake? There’s no way, there is no way. A 91.75?” he said in commentary for NBC. “As far as I’m concerned, the judges just grenaded all their credibility.

“I’ve been doing this for so long, so long, I know what a good run looks like. I know the ingredients of a winning run. I know when I’ve seen the best run that’s ever been done in the halfpipe.

“Try to tell me where you’re deducting from this run. It’s unbelievable that this is even happening. It’s a travesty to be completely honest with you.

“I am irate right now.

“Someone call the authorities, there’s been a robbery.”

Fortunately for Hirano, the controversial call didn’t cost him. He produced another breathtaking run on his third trip to the pipe and this time the judges scored him a 96. It was enough for him to claim gold.

Could Trump be charged for not turning over presidential records?