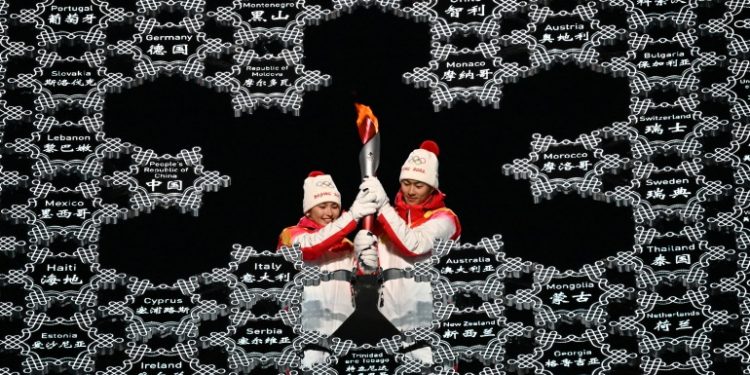 
China’s move to thrust a young Uighur athlete into the spotlight at the climax of the Beijing Winter Olympics opening ceremony has placed her at the centre of longtime controversy over rights abuses in Xinjiang.

Dinigeer Yilamujiang, a 20-year-old cross-country skier, trained for years to fulfil every child’s dream to star at the Olympics.

But her prominent, smiling appearance as the final Olympic torchbearer on Friday along with 21-year-old biathlete Zhao Jiawen at the “Bird’s Nest” National Stadium in front of thousands of spectators and TV cameras had clear political overtones.

She is from the Uighur minority from the region of Xinjiang, where China’s ruling Communist Party is accused of widespread human rights abuses.

Following Yilamujiang’s appearance on television across the world, Chinese diplomats shared videos on Twitter of her family clapping as they watched the ceremony on screen, some dabbing tears from their eyes.

China has repeatedly exhorted its critics to stop “politicising” the Olympic Games, overshadowed by issues including human rights violations, COVID, and fears of what will happen to athletes if they speak out at the games.

Asked by journalists if Yilamujiang’s inclusion met the standard of political neutrality, the International Olympic Committee (IOC) said she had “every right” to participate.

“Obviously the opening ceremony is something that the organising committee put together and there’s creative input,” IOC spokesman Mark Adams said. “We are involved to a certain extent.”

“As you’ll know from the Olympic Charter, we don’t discriminate against people on where they’re from, what their background is,” he continued.

“This is an athlete who is competing here, she is competing this morning. She has every right, wherever she comes from, whatever her background, to compete … and to take part in any ceremony.”

Games organisers said the final handful of torchbearers who entered the stadium with the flame had been picked based on their birth dates with each having been born in a different decade, starting from the 1950s through to the 2000s.

The fate of China’s Uighurs has been at the centre of international alarm.

At least one million people from the mostly Muslim minority have been imprisoned in “re-education camps” in Xinjiang, campaigners say, and Chinese authorities have been accused of forcibly sterilising women and imposing forced labour in the area.

The United States has accused China of genocide, a charge denied by Beijing.

Although world leaders, including Russian President Vladimir Putin, were present at the ceremony on Friday, the US, Australia, the United Kingdom and Canada were among key countries that did not send diplomatic representatives over rights concerns, especially in relation to the Uighurs.

Ma Haiyun, an expert on Xinjiang and associate professor at Frostburg State University in Maryland, said Yilamujiang’s selection was intended to send a message.

“By selecting a Uighur athlete to light the torch, China is trying to address criticism by the West about genocide or persecution of the Uyghurs, and about sinicisation of ethnic minorities,” he told Reuters news agency.

“But I don’t think this can have much effect on the West, which tends to think most of what China puts up is a show anyway,” Ma added.

China rejects accusations of abuse, describing the camps as vocational centres designed to combat “extremism”, and in late 2019 said all people in the camps had “graduated”.

Yilamujiang started ski training aged 12, according to China Sports Daily, under the guidance of her father – also a cross-country skier who competed nationally.

Altay, the part of Xinjiang she is from, has been touted by Chinese state media as the “birthplace of skiing” and a growing winter sports destination.

In 2019, she became the first Chinese cross-country skiing medallist in an International Ski Federation event, with media reports lauding her as having achieved a “breakthrough” for the country in the sport.

Her first event at Beijing 2022 was a skiathlon on Saturday.

The games run until February 20 and are taking place inside a “closed loop” bubble due to the coronavirus pandemic.