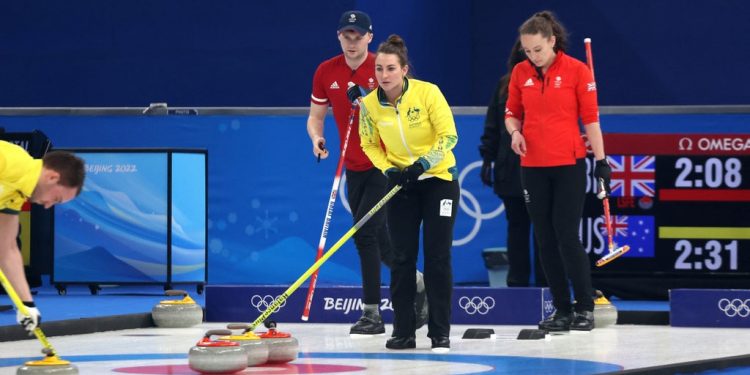 The 2022 Winter Olympics officially gets underway today with the opening ceremony in Beijing. The ceremony is taking place at the Bird’s Nest stadium, built and used for the 2008 summer Olympic games, as Beijing becomes the first city to host both editions of the games. The stadium also served as the venue for Track and Field as well the men’s 2008 gold medal soccer game, but will not host any sporting events in 2022.

The opening ceremony will be directed by Oscar-nominated cinematographer Zhang Yimou, who directed the opening and closing ceremonies in 2008. The parade of nations is expected to follow the same order as at Beijing 2008, with countries entering the stadium according the strokes used in the Chinese-language characters of their names. Greece, as tradition dictates, will enter first as the first-ever host of the Olympics, and China as the host nation will enter last.

Away from the ceremony, British curlers Jen Dodds and Bruce Mouat will take on Australia in the mixed doubles event. Team USA dominated figure skating events that began on Friday, starting with American star Nathan Chen, 22, topping the chart with a new personal record of 111.71 in men’s short while Madison Hubbell and Zachary Donohue earned 86.56 in rhythm skating. Follow all the latest below.

Lizzy Yarnold hands over to the class of 2022

Flag bearer and Team GB’s sole gold medallist four years ago, Lizzy Yarnold tees things up for those competing this time around in Beijing.

There are also Covid fears in the German camp, with a fresh round of testing ordered after sixth athletes tested positive earlier this week. Four competitors have now been cleared after subsequent negative tests, but Eric Frenzel and Terence Weber are now isolating.

This is a major blow to their Nordic combined hopes. Frenzel is a six-time Olympic medallist and two-time defending champion.

“Team Germany on Friday afternoon received confirmation of two further COVID-19 cases,” the team said in a statement. “Tests for Eric Frenzel and Terence Weber confirmed their results initially taken at the airport.”

“The four other suspected cases which were in the skeleton and ice hockey teams were not confirmed (positive) following two re-tests.”

Athletes who want to return to competition and training will need to be without symptoms and provide two negative tests 24 hours apart to be released from isolation.

Norway skiing coach Eirik Myhr Nossum has said that his team will do whatever it takes to get Simen Hegstad Krueger back from a positive Covid-19 test in time for the blue ribband 50 km men’s race at the Beijing Games on 19 February.

Speaking to state broadcaster NRK, Nossum revealed that 2018 double Olympic champion Krueger was not feeling any ill effects of Covid and had been cycling in his room to keep fit as he awaits the negative test results that could open the door for an appearance in China.

“I’m very happy with Simen’s results lately. I can reveal that we’re trying to get Simen here … we got very positive PCR results the last few days, and we’ll get more today, I believe he’ll be here the 11th or 13th of February,” said Nossum.

Krueger took gold in the skiathlon and was part of the victorious men’s relay team at the Pyeongchang Olympics, where he also won silver in the 15 km freestyle.

A potential face of these Games, freestyle skiing star Eileen Gu could feature prominently throughout the Winter Olympics, including tonight.

Here’s what you need to know about an outstanding talent whose switch from the USA to the host nation has not come without criticism:

We aren’t too far away from proceedings getting underway at the Bird’s Nest. Expect colour and creativity during an opening ceremony again directed by Zhang Yimou, who was praised for his work during the 2008 Summer Games.

Who should Team GB fans look out for at the 2022 Winter Olympics? Here are five potential medal contenders:

“As a British Olympian, it is the greatest honour to be asked to carry our country’s flag,” Dave Ryding adds to his flag-toting partner’s comments. “Many amazing athletes have been chosen to do this role in the past and it goes without saying that it is one of the proudest moments of my career.

“I have always represented Team GB with the greatest of pride and for my fourth Olympics this will make it extra special. I am one of 50 Winter Olympians representing Team GB in Beijing, we are part of an amazing country and I know we will give our upmost to perform to the best of our abilities out here.”

An incredibly popular member of Team GB, Eve Muirhead is at fourth Winter Olympics and looking to medal again eight years on from becoming the youngest skip to stand on the podium at an Olympics in curling history.

“I feel incredibly honoured to be chosen as the flagbearer for Team GB,” Muirhead said from the Olympic village yesterday. “Getting to my fourth Games has been one of the greatest challenges of my entire career but my pursuit of qualifying for Beijing has been relentless and this is an immense privilege.

“It is an experience that will mark the start of what I hope will be the most rewarding of Olympic campaigns to date and a memory I know my family and friends will, like me, remember forever.”

Eve Muirhead and Dave Ryding to be Team GB flagbearers

14 years on from the Opening Ceremony of the Summer Olympics in 2008, we are back at the Bird’s Nest for a rather chillier edition of the traditional pre-Games spectacular. Bearing the British flag on that occasion was Mark Foster’s long limbs, but history will be made today as two Team GB athletes are bestowed the honour at a Winter Olympics for the first time.

Just like at Tokyo 2020, one man and one woman have been selected at flagbearers, and it is hard to quibble with the choices made by a panel headed by Team GB’s Chef de Mission, Georgina Harland. Slalom skier Dave Ryding, fresh from becoming the first British alpine skiing World Cup winner, will be joined by female curling skip Eve Muirhead, at her fourth Games, in carrying the Union Flag around the Beijing National Stadium.

British Olympic officials insist they are playing by the rules as they prepare to unveil the top secret hi-tech hacks they hope will score more medals in the mountains.

British Skeleton have been working with performance innovation specialists at the English Institute of Sport to seek the ‘marginal gains’ needed in a sport where fractions matter.

Training started in Yanqing yesterday with furtive and jealous glances from rivals as the wrappers were peeled off new kit.

Skeleton has become Britain’s national winter sport with seven medals at the last five Games, including three golds, and the appliance of science has been at the heart of that success.

“We are 100 per cent playing by the rules all the time,” insisted British Skeleton’s performance director Natalie Dunman.