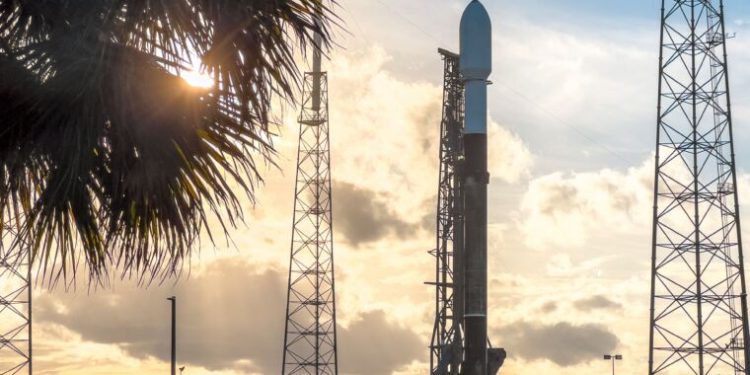 10:40 am ET Update: With clearing skies and moderate winds, SpaceX’s Falcon 9 rocket rideshare mission safely launched into space on Thursday. The first stage then sent its upper stage and a payload with 105 small satellites on its way into low Earth orbit. The Falcon 9 first stage made a smooth landing back near its launch site.

Remarkably, this single Falcon 9 rocket first stage has now launched 550 satellites into orbit, as well as one Cargo Dragon and one Crew Dragon. It has flown, on average, every two months since its first launch. It would seem that rocket re-use is more than a fad.

The rocket has a 29-minute launch window, which opens at 10:25 am ET (15:25 UTC), and weather conditions are forecast to be fair. This will be the company’s third rideshare mission in which it uses its Falcon 9 rocket to compete with small satellite launch companies.

For this mission, the rocket will launch 105 different spacecraft. Among them are 44 “SuperDove” satellites for Planet, which the company said will replenish its current constellation, which images every landmass on Earth every day. The varied manifest includes CubeSats, microsats, PocketQubes, and orbital transfer vehicles for a mix of government and commercial customers. The satellites will be deployed over about a 90-minute period.

The combined mass of the payloads is light enough that SpaceX will be able to perform a land-based return of the Falcon 9 first stage at its landing zone along the Florida coast—the first in more than half a year. Nearby residents, therefore, will be able to enjoy both a launch and then a series of sonic booms about eight minutes after liftoff.

For the launch, SpaceX is using a previously flown first stage that has a lot of experience. This rocket, initially used for a commercial crew demonstration mission in 2020, has since flown ANASIS-II, CRS-21, Transporter-1, and five Starlink missions.

Upon launch, it will become the third Falcon 9 first stage that SpaceX has flown 10 times. Notably, this booster, number 1058, reached this 10-flight milestone in 594 days. The previous 10-flight rockets required 1,100 and 799 days, respectively. So SpaceX continues to bring down the time needed between reuse of each first stage, as Booster 1058 has only required about two months between flights.

The company will begin a webcast for the Transporter-3 mission about 15 minutes before liftoff.