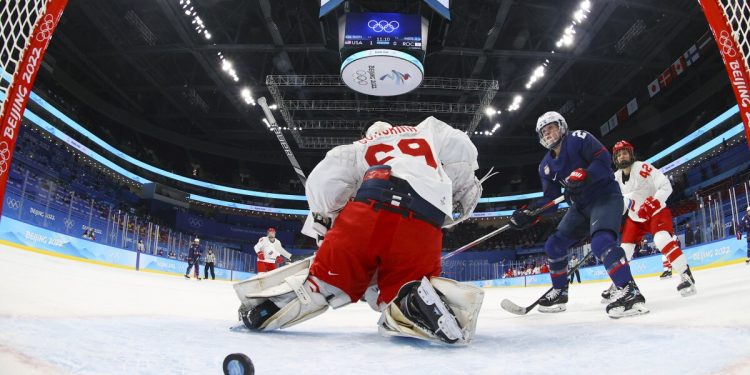 No matter what came at them, no matter how many of their pre-Olympic plans were shredded by the impact of the coronavirus, the mantra of the U.S. women’s hockey team has remained the same: Adjust and adapt.

Even though they were shaken when standout forward Brianna Decker suffered a ghastly left leg injury Thursday, they knew they had to adapt to the reality that she won’t return in the tournament. The richness of their talent will allow them to compensate for her absence. Their resolve is just as deep. It allowed them to adjust to the physical, defense-minded style the Russian Olympic Committee team favored Saturday, a distinct contrast to the speed-based game Finland had played in their Olympic opener.

“We know our character and we know our identity in the room,” forward Hilary Knight said. “But it’s good to test us and figure out how to work our way through a tournament with different obstacles and do it together. It was good to present ourselves with that obstacle, to say, ‘OK, how do we figure this out? How do we problem solve on the fly and find the back of the net and come home with the W?’”

The answers were simple: Be patient, and get people and pucks to the net. Held to one goal in each of the first two periods by the exceptional goaltending of Maria Sorokina, the Americans manufactured three goals in the third period to earn a 5-0 victory Saturday in preliminary round play at Wukesong Sports Centre. U.S. goaltender Nicole Hensley faced 12 shots; Sorokina and Daria Gredzen — who took over for Sorokina after the fifth U.S. goal — faced 62 shots.

Defenseman Savannah Harmon scored the first goal and assisted on two others, wisely picking her spots for offensive forays. Knight had a goal and an assist as the U.S. women matched the Russians shove for shove and overwhelmed them with scoring contributions from each of their revamped lines.

“Savannah’s just a really gifted offensive instinctual player and so when she sees an opportunity to go to the net or make a play or shoot the puck, she sees it in a way that not a lot of people do,” U.S. coach Joel Johnson said of Harmon, who had two assists in the Olympic opener against Finland.

“She’s been that way since she was young. And now she’s comfortable playing at this Olympic level and you’re starting to see that comfort translate into confidence and then execution.”

Harmon and the rest of the team honored Decker the best way they knew how: playing with as much fire as skill. Decker, whose left leg is in a walking boot, watched from a wheelchair. Her presence is still keenly felt.

“She’s just an incredible teammate and fierce competitor,” Harmon said. “She’s an incredible leader and she’s just a huge aspect of this team. I think today we were definitely playing with an extra chip on our shoulder just for her, doing whatever we can to make her proud.”

The Americans controlled the first period and had a 19-2 edge in shots on goal but were repeatedly stymied by Sorokina, who played a few games for the Connecticut Whale of the National Women’s Hockey League (now the Premier Hockey Federation) in 2018-19. They needed a power play and slick passing to get the better of Sorokina and take the lead.

Hannah Brandt set the play in motion with a crisp pass to Knight, who was near the post. Knight then made a no-look backhand pass to Harmon, who was alone by the right post and scored at 12:29.

“I’m there and in my head I’m [thinking], ‘She’s going to figure out a way to get me this puck,’ and there she does,” Harmon said. “Incredible backhand. She gets the positioning and just slides it over. My job was really easy.”

Knight’s redirection of a long shot by Harmon extended the U.S. lead to 2-0 at 8:51 of the second period. Sorokina again was nearly perfect, but she couldn’t hold off the Americans in the third. Grace Zumwinkle redirected a pass out of the corner by Dani Cameranesi at 3:57, Jesse Compher finished off a pass by Abbey Murphy to make it 4-0 at 6:15, and Alex Carpenter tapped in a bouncing puck at 8:44 for a 5-0 margin on the Americans’ 43rd shot on goal.

Zumwinkle said the team’s production was a product of months of efforts to build chemistry on each line. Faced with the sad need to find new chemistry after Decker was injured, they had no trouble adapting and adjusting once again. “She’s obviously a huge part of this team,” Zumwinkle said, “but we’re going to rally around her and come out stronger because of it.”

Opinion: 6 of 10 community college students never get their degree — how to address 11 big reasons why that happens

Opinion: 6 of 10 community college students never get their degree -- how to address 11 big reasons why that happens