Wizards have no answers for Cavaliers down the stretch 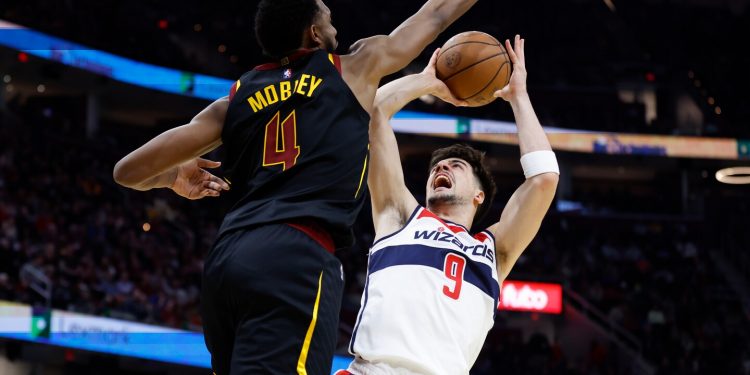 The Wizards, ahead for most of the contest, watched as Cleveland scored 17 of the game’s final 19 points, handing the visitors a tough 92-86 loss at Rocket Mortgage Fieldhouse.

The Wizards (27-33) blew a nine-point fourth-quarter lead and scored just one field goal over the final 6:39.

“You can play 42 solid minutes, last six kind of got away from us,” Unseld said. “We just have to be better down the stretch.”

Eighteen Wizards turnovers were turned into 23 points for the Cavaliers (36-24).

“Just unforced [turnovers],” Unseld said. “We were just trying to do too much.”

The Wizards led 42-40 at halftime, a margin that would have been higher except for 13 turnovers that the Cavs turned into 15 points. The team got sloppy down the stretch and the Cavs finished on a 8-2 stretch to cut into the Washington lead.

The Wizards’ lead was four entering the fourth quarter as they once again rode the hot shooting of Kyle Kuzma (34 points, including a career-high eight three-pointers on 11 attempts). He added 13 rebounds. But he wasn’t enough to save the Wizards late.

Daniel Gafford scored 14 for the Wizards and Kentavious Caldwell-Pope added 13. Rui Hachimura finished with 10 off the bench.

Lauri Markkanen led the Cavs with 23 points, Jarrett Allen posted 18 and 14 rebounds and Cedi Osman poured in 19 off the bench.

Here’s what to know from the Wizards’ loss:

Center Thomas Bryant has been put on a minutes restriction after tweaking his ankle in practice after returning from the all-star break. Unseld said the plan is to keep him in the 16-18 minutes range as he backs up Daniel Gafford. He played 16 minutes Saturday.

The Cavs were without all-star guard Darius Garland (lower back soreness) and Caris LeVert (right foot sprain). Garland doesn’t have a time frame for how long he’s out, but LeVert is expected to miss 1-2 weeks. Point guard Rajon Rondo was also out with a right great toe sprain and is believed to be out two weeks.

Not all back-to-backs are created equal. The Wizards finished a grueling, double-overtime loss to the Spurs with 310 points scored between the two teams. The game ran four minutes shy of the three-hour mark. Then the team flew to Cleveland, arriving around 2 a.m.

“You don’t make the schedule and you can’t really worry about it,” Unseld said pregame.

Kuzma is not sneaking up on anyone these days. The forward is at the top of scouting reports as he entered Saturday averaging 22.5 points, 9.3 rebounds and 5.0 assists over the previous five games. Kuzma has been the No. 1 scoring option since Bradley Beal had wrist surgery and the league knows it.

“It’s difficult because he’s all over the floor,” Cavs Coach J.B. Bickerstaff said pregame. “He’s not a guy who you can say, he’s going to be in this spot and they’re going to run this one action. He’s a guy who will defensive rebound and bring the ball up. He’ll play pick-and-roll. He’ll come off screens. He’s active off the ball. He’s a three-point shooter.

“So there’s so many things that he does that you have to be aware of, and that’s what makes him a hard guard.”

The San Antonio Spurs and point guard Tomas Satoransky have agreed to a buyout, according to ESPN. The report indicated that such a move would set the stage for Satoransky, a former second-round pick of the Wizards in 2012, to return to Washington, signing a deal for the rest of the season.