The 42nd season of the WNBL starts on Saturday, December 4, 2021.  The league’s new campaign follows a season of ups and downs for Australian women’s basketball.

Further WNBL information can be found on their website.

Unlike the 2020 season, which consisted of a six-week condensed calendar due to the COVID-19 pandemic, the 2021-22 season returns to a home-and-away calendar with semi and a grand final series.

The season follows a year of ups and downs for Australian women’s basketball, one that saw the Opals finish in their lowest position at the Olympic Games since the WNBL was established but concluded with the national team winning bronze in October at the FIBA Asia Cup.

This WNBL season will include a number of the Opals in that squad.   Several WNBA players are also joining WNBL teams.  The Canberra Capitals have signed WNBA all star Brittney Sykes, Adelaide United acquired former WNBA first round draft pick Alanna Smith while Bendigo have WNBA veteran Leilani Smith to name a few.

What is most exciting though is that the league is filled with younger talent, a number of whom won Bronze with Australia two months ago.  Moreover, Bendigo Spirit and Southside Flyers have all-Aussie teams.   The league also boast a 100% vaccination rate against COVID-19.

The WNBL has signed an extensive broadcasting agreement with the ABC, Fox Sports and Kayo.   With a schedule which runs until April, this season has a lot to offer for Aussie basketball fans including two games in the opening weekend.

The Southside Flyers will face the Bendigo Spirt at 5:00 PM AEDT on Saturday, December 4, 2021 followed by a Sydney University Flames versus University of Canberra Capitals match on Sunday, December 5, 2021.

The 2021 Ballon d’Or was awarded this week and saw the Matildas captain finished third in the voting. 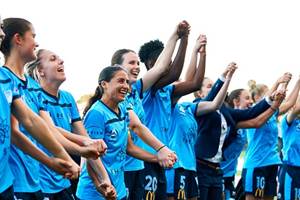 A-League Women’s Round One Schedule

The full WNBA schedule can be found using this link.

Why did Tommy Fury pull out of the Jake Paul fight?

Mortgage prisoners: FCA publishes a review on those trapped

Mortgage prisoners: FCA publishes a review on those trapped