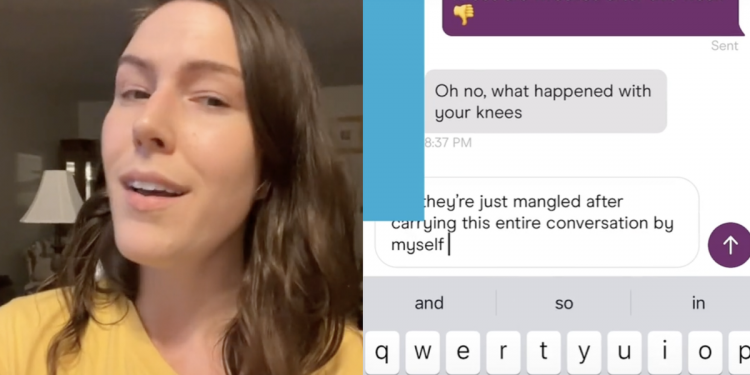 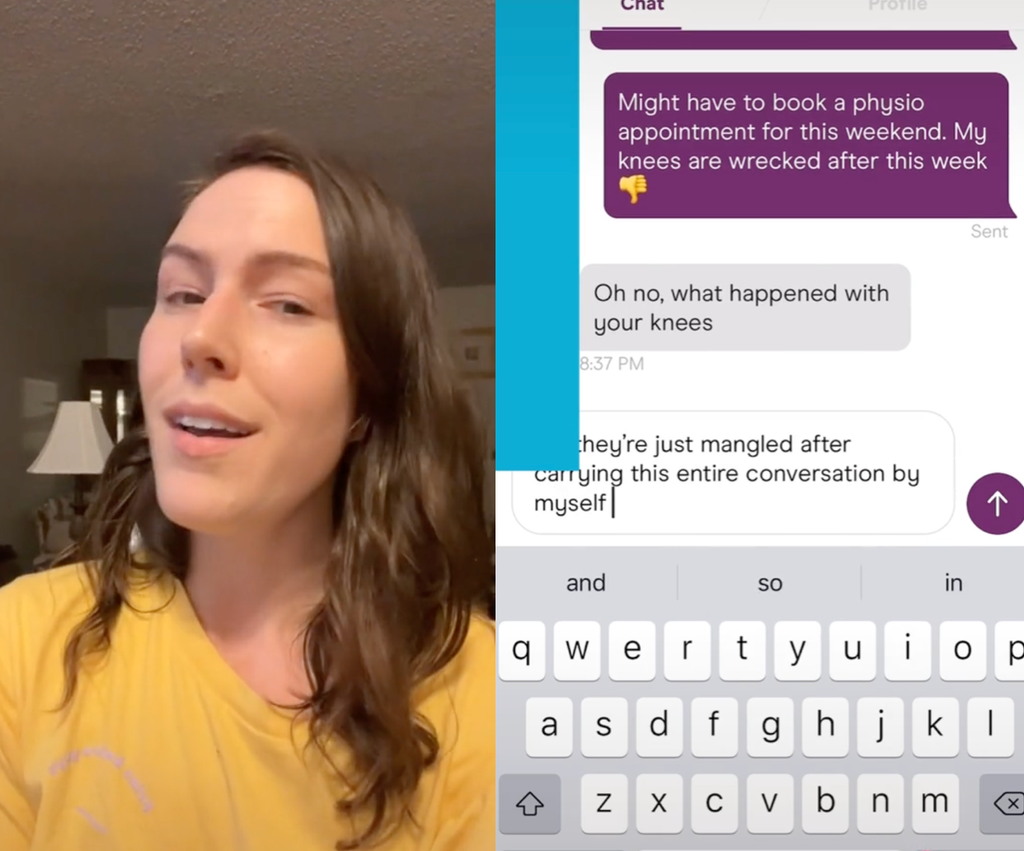 A woman has revealed how she called out her Hinge match for failing to ask her a single question during their conversation, after they exchanged multiple messages in which he talked only about himself.

In a recent video shared to TikTok, Kyra, @itskyra.notkyra, explained that she’d been talking to man on Hinge for almost a week, during which she’d had to “carry” the whole conversation between them.

“The best thing just happened to me,” she said. “I’ve been chatting with this guy for almost a week, since last Sunday, and I have not been asked a single thing. I have asked every question. He has given me answers and no more. I have carried the whole thing by myself.”

Kyra then proceeded to show screenshots of their conversation, noting that, if viewers “paused” the video at any point, they could tell that she’d been the one “asking questions and keeping it going”.

According to the screenshots, one question she asked her Hinge match was if he had “any worthy stories to share” from a recent trip he took. After talking about his trip, she asked him where else he had travelled. He told her that he’d been to Las Vegas and Los Angeles. According to the screenshots, however, he didn’t ask her anything about her, prompting Kyra to say something about her match’s dedication to only talking about himself.

“He’s giving me nothing in response,” she continued. “And after three days of it, this idea popped into my mind, and I was like: ‘You know what, you get maybe one chance to actually pull this off.’”

Kyra then showed a message she sent to her Hinge match, in which she wrote: “Might have to book a physio appointment for the weekend. My knees are wrecked after this week.”

The message prompted Kyra’s match to ask her what happened with her knees, to which she said: “Oh they’re just mangled after carrying this entire conversation by myself.”

She recalled to viewers how it “felt so good to type” the message and that she was “way too excited” about it. “I won, it’s over,” she added. “I can’t even describe this high to you right now.”

As of 5 April, the video has more than 591,000 views, with TikTok users in the comments praising Kyra for her handling of the situation.

“Savage I love it,” one person wrote. “Couldn’t have gone a week though so fair play to them knees.”

Many viewers suggested that Kyra shouldn’t have kept the conversation going for as long as she had, while others shared similar experiences with dating.

“Girl. Why did it take a week for that?” one TikTok user asked. “Don’t waste that much time when you probably knew his pattern [from] day one.”

“Men do that all the time,” another person claimed. “I think it’s because they honestly believe that having a conversation just involves talking about themselves.”

In a follow-up video, Kyra posted screenshots of the man’s response to her, where he disagreed with her, as noted that he felt like he had kept the conversation going, but acknowledged that her response had been “hella savage”.

According to Kyra, who said that the man “was actually impressed by the execution of such a savage burn,” he’d replied: “Hahaha that was hella savage … Lately at work I’ve been working 14 hours with all this darn snow melting it’s been creating big washouts. So lately I’ve been trying hard to squeeze out what little social interactions here and there on this app.”

“I’m not going to sleep very well now because of how bad you burned me right now,” he added. “That was a very slick set up.”

The response prompted Kyra to acknowledge that she is also busy, with the TikToker adding: “The fact that he actually thought he was contributing to the conversation. In what world? Like, you’re busy? Aww, you’re busy. I’m a full-time student. Fight me. If you don’t have time to talk, why are you on this app?”

A NEW Covid variant, named XE, is detected in the UK

A NEW Covid variant, named XE, is detected in the UK