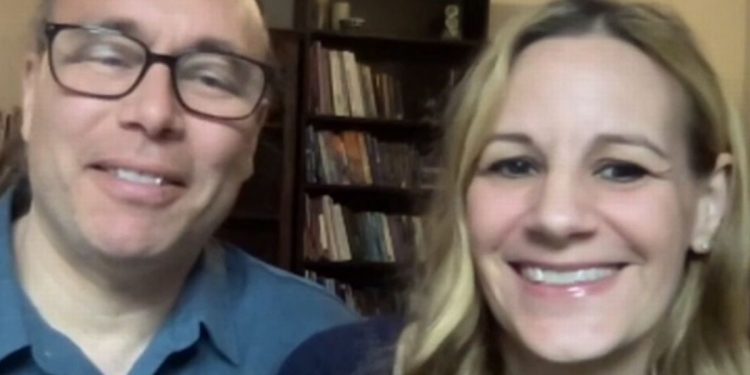 
A woman fell in love with a sperm donor after having his baby 12 years ago – with her ex-wife.

Jessica Share thought she found her life partner in her wife and so they decided to buy some sperm so the pair could start a family together.

The couple opted to buy the semen from an anonymous donor, so Jessica never imagined meeting the biological father of her child – let alone be in a relationship with him.

But fast forward to today, Jessica and her partner Aaron Long are now living out their version of a “fairy-tale.”

Speaking on Steph’s Pack Lunch, Jessica, from the US, explained: “I was married to my wife and living in another state and we decided to get an anonymous sperm donor.

“Back then you looked on the Internet and picked someone out thinking you would never get the chance to meet them.”

After a decade had flown by, Jessica’s daughter, Alice, became curious about her DNA and wanted to learn more about her heritage.

“My daughter really wanted to know what countries she was from so we did a DNA test at Christmas.

“She wasn’t interested so much in what her father’s name was. Her Grandma, who loves genealogy, very kindly jumped in and gave her a DNA test.

“We did the test and you can opt in to see your DNA relatives and we pushed the button and the first thing that came up was Aaron Long – shares 50% of genes – father.”

Finding out was initially “terrifying” for Jessica as the results on the database made her stop in her tracks and think about whether they wanted to proceed and contact Aaron.

“It was terrifying because I had no idea that database was so big and people were doing it.

“I had no expectation of anything.

“Aaron was pretty new to the site too and we had to stop and think what are we going to do about this.”

For Aaron, donating his sperm was just a “part-time” job alongside his work as a taxi driver.

Although he never set out on finding his kids himself, Aaron had been contacted by several other of his “sperm children” and was not reluctant for them to get to know him.

He explained: “In 1994 I was working as a cab driver and didn’t have too much going on in my life and it was an easy part-time job.

“Then that Christmas I received this message which said it was from Alice, but it was really Jess writing, and she explained she had a daughter by me and was interested in sharing information about her and getting to know me and I said the same things back.

“I had already met a couple of other sperm children and my position was always ‘if you want to get to know me I am pretty open to that’.”

When contact had been made Jessica hadn’t been with her wife for a while so decided to meet Aaron along with a few other of his children he has had through sperm donation.

Jessica said: “We had a two-week vacation together and it felt like we had always known each other and we had a lot of fun and the rest is history.

“We did everything everyone else does, but backward.”

Before their first meeting, Aaron exchanged messages with Jessica on Facebook and felt that he didn’t look like his biological daughter.

But after seeing each other In person, Jessica first became attracted to Aaron because of the similarity of facial expressions he has to Alice.

Aaron explained: “Alice and I get on very well, we have similar temperaments, she doesn’t consider me her dad but her mum’s boyfriend.

“She had another parent for 12 years. We are friends, we live together.