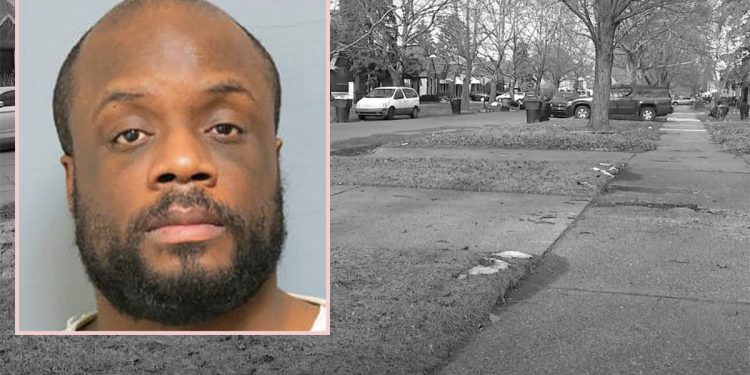 
A Michigan woman in critical condition and her twins — with whom she is six months pregnant — are fighting for their lives after she was set on fire by her partner, according to police.

Devonne Marsh (mugshot above), a 41-year-old man from Detroit, was arrested late last week by police in the Michigan city and accused of setting his girlfriend on fire after an argument between the two of them escalated into horrific violence.

Related: Teen Arrested For Attempted Murder After Shooting Her Mom For Taking Away Her Meth

Per the Detroit PD, Marsh “covered his girlfriend in lighter fluid and ignited the flames.” She has not been publicly identified, but police say she has been hospitalized in critical condition. Police Commander Michael McGinnis told local TV news station Fox 2 Detroit that she has third-degree burns on at least 60 percent of her body.

As the woman fights for her life in the hospital, the tragic story of her unborn children has come front and center, too. According to reports, Marsh’s partner is 6 1/2 months pregnant with twins. Police say that it is “unclear if the twins will survive” even now, a week after the incident.

Detroit PD Sergeant Kyla Williams revealed to the news outlet that an anonymous tipster first reported the crime to the police after the victim was “scared to speak up” due to fear of retaliation. Williams, who runs the department’s domestic violence unit, said to the media:

“I want to applaud her for coming forward. I want to again let her know that she is not alone.”

So scary to think about this whole situation, and the fear this man must have held over his pregnant partner — as well as the fact that it took a tipster to come forward for this poor woman to even begin to get some justice.

As for Marsh, he has officially been charged with kidnapping/abduction, aggravated felonious assault, and violation of the controlled substance act. His bond has been set at $50,000. It is unclear whether he has been bonded out of jail at this point. According to the news outlet, online jail records indicate that Marsh has a prior history of charges and convictions, including ones for “weapons possession and violent crime.”

Here is more on the horrific and violent situation, from Fox 2 Detroit (below):

Hoping and praying that this woman — and her twins — can survive this horrific act.