Woman reveals a cruel message she got from her Bumble match 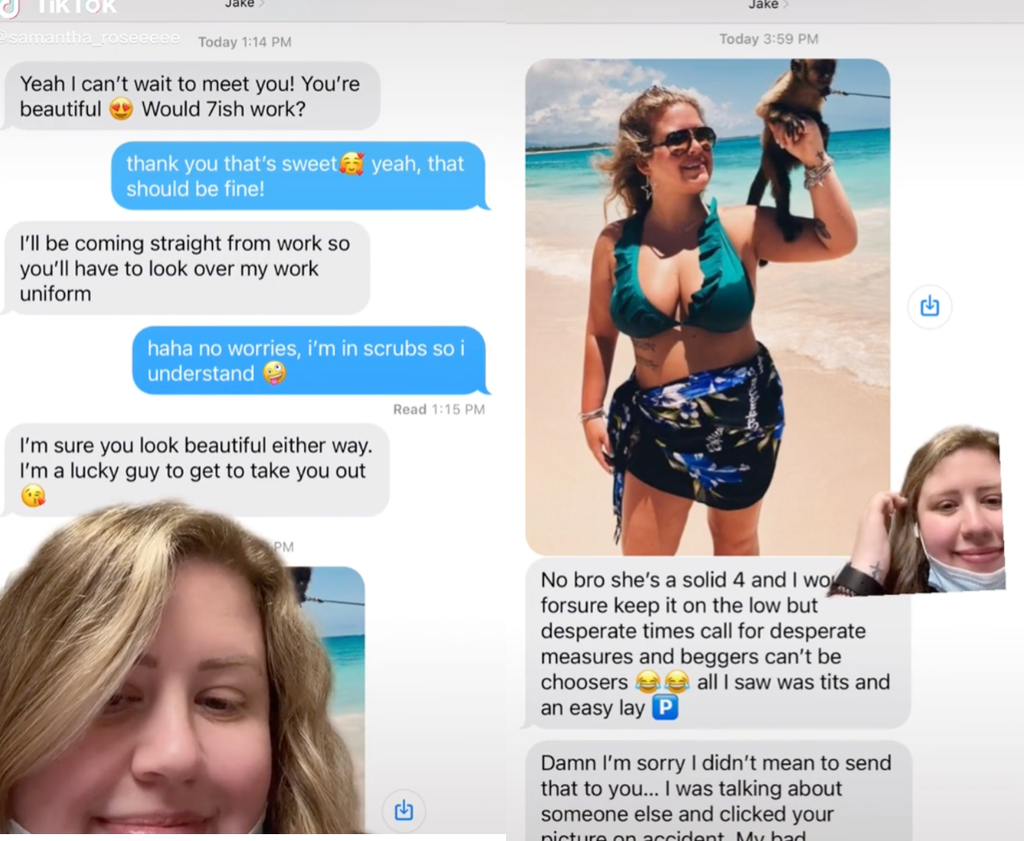 A woman has shared a rude text she got from a man on a dating app, where he accidentally sent her one of her photos and called her a “solid four.”

In a recent video posted to TikTok, Samantha, @samantha_roseeeee, shared screenshots of a text conversation with someone named Jake, who she matched with on Bumble. Throughout the first messages shown, Jake and Samantha were planning a time to meet each other. In one of  his texts, Jake called her “beautiful” and said he was “lucky” to go out with her.

A few hours later, he accidentally sent Samantha a photo of herself on the beach, which he seemingly got from her Bumble profile.

“No bro she’s a solid four and I would for sure keep it on the low,” his text message reads. “But desperate times call for desperate measures and beggars can’t be choosers.” He claimed that all he was interested in was the size of her breasts and an “easy lay.”

He then apologised to Samantha, in an attempt of convincing her that his message wasn’t about her, and he sent it by mistake.

“I’m sorry I didn’t mean to send that to you,” he wrote. “I was talking about something else and clicked your picture on accident. My bad.”

As of 1 March, the video has over 10.8m views, with TikTok users in the comments claiming that it seemed like Jake sent his texts on purpose.

“What bothers me most is that him sending it to you seems secretly intentional,” a commenter wrote. “Like what kind of MONSTER does that?!”

“Did he think his attempt [to save] the situation was somehow better???” another asked.

Many other TikTok users also came to Samantha’s defence, acknowledging how “good” she looks in the photo that Jake sent her.

“That picture brings me so much joy just looking at it,” one wrote. “Some people are intimidated by others’ light – shine bright baby!”

“​​That craziest part is you look so good in that picture lol,” another viewer said.

In a follow-up videoSamantha noted that she decided not to go to her plans with Jake. Although she never responded to him, he did reach out to her, recalling how she didn’t show up for their date and expressing that he saw her TikTok video about him.

He also sent her a picture of her Instagram account, asking if it was her or not. He accused her of “being a b**** for no reason” and told her to “learn to take a joke.”

In another clip posted to TikTok, Samantha showed that Jake texted her once again, claiming that if she didn’t take her initial video about him dowm, guys would think she’s “crazy.”

“Look I’m sorry I’ve been drinking and shouldn’t have acted this way but I have a low tolerance for women who act like this,” he wrote. “Just delete the TikToks and we can part ways.”

She responded to him saying: “If you contact me again or ever consider coming near me, I’m going to report you for harassment before you even have time to think of another wacky text to send to me.”

Jake then called her “dramatic as f***” and said that he was “blocking” her number.

The Independent has reached out to Samantha for comment.

In State of the Union speech, Biden aims at Putin and polls