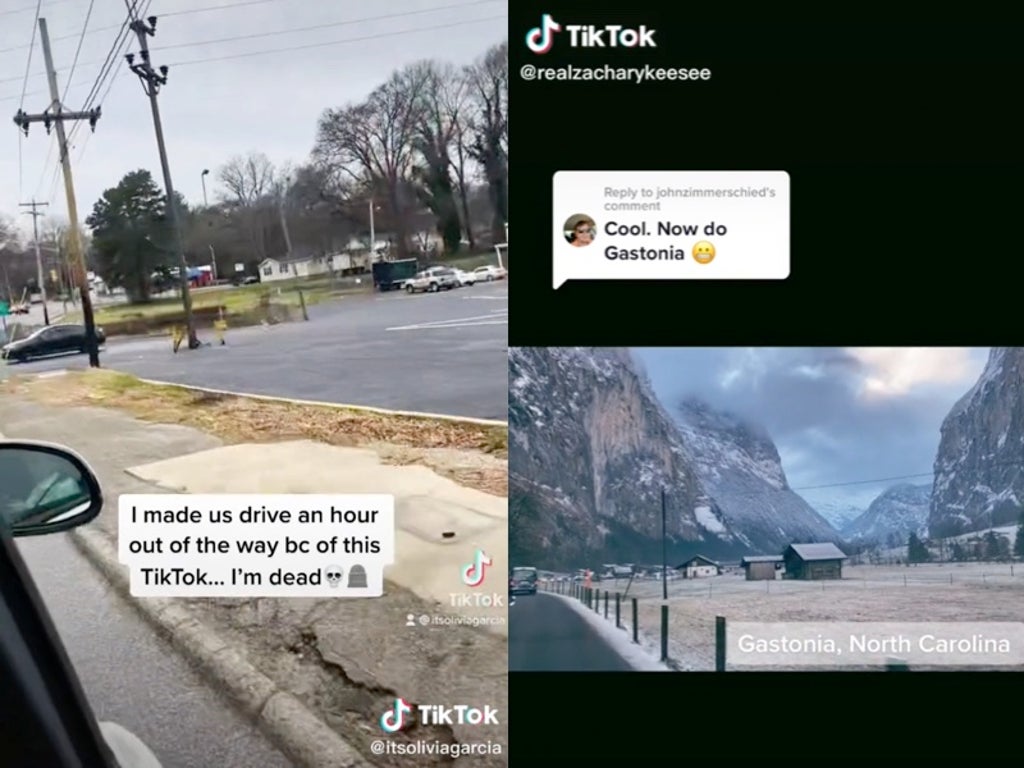 A woman has revealed that she travelled to a North Carolina town after a TikTok tricked her into believing she would find a picturesque village surrounded by the Alps.

Olivia Garcia, from Florida, who goes by the username @itsoliviagarcia on TikTok, posted a video to the app detailing her experience, and what she actually found when she arrived in Gastonia, North Carolina, earlier this month.

In the clip, Garcia began by showing the video, created by TikTok user and North Carolina native Zachary Keesee, who goes by the username @realzacharykeesee on the app, that convinced her that the North Carolina town would resemble a winter village.

In the video, it showed a scenic town surrounded by snow-covered mountains, which Keesee, who frequently shares fake location videos, identified as Gastonia, North Carolina. However, as he later revealed in the comments, the footage actually showed Lauterbrunnen, Switzerland, which he described as “one of the most beautiful places on earth”.

While Keesee clarified the location in the comments, the video, which has been viewed more than 5.9m times, was reportedly enough to convince Garcia, who revealed in her own video that she made her family drive an hour out of their way to visit the allegedly TikTok famous town.

“I made us drive an hour out of the way because of this TikTok,” Garcia wrote in a text caption on her video. “I’m dead.”

The TikToker then proceeded to share what she and her family actually saw upon their arrival in the North Carolina town, with the video showing the car speeding past strip malls and various gas stations.

According to Garcia, who spoke to WBTV about her mistake, she and her family were in North Carolina to see the recent snowfall when she asked if they could make a pitstop to visit the town, which she noted reminded her of a Disney movie.

“It sounded like a Disney movie, right? Like a little town out of a Disney movie,” she said, adding: “I was like oh wait can we make a pit stop in this place called Gastonia because I just saw this TikTok and it looks so pretty.”

Rather than the idyllic village that she was expecting, Garcia told the outlet that the destination included a lot of “rundown gas stations”.

While the road trip didn’t live up to her expectations, her video documenting the error has since gone viral on TikTok, where it has been viewed more than 333,000 times.

“As someone from NC I’m laughing so hard. Sorry this happened to you. If it makes you feel better your mistake has brought me and my fam a lot of laughs,” one person commented.

Another joked: “You’re on the wrong side of the mountain, just take the next exit.”

Others said that Garcia was to blame for the mishap, as they claimed she should have searched her destination beforehand.

“There’s this thing called Google…” someone else wrote.

The video also prompted a response from Keesee, who wrote: “I’m so sorry,” to which Garcia responded: “I forgive you.”

As Pandemic Rolls On, How to Know if Your Child Needs Therapy

As Pandemic Rolls On, How to Know if Your Child Needs Therapy