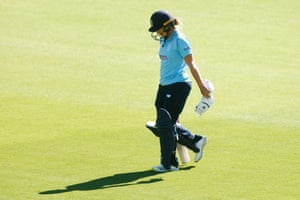 29th over: England 78-2 (Beaumont 28, Sciver 33) Jonassen gets through another over, four singles this time.

28th over: England 74-2 (Beaumont 26, Sciver 31) Tahlia McGrath is back. Three times, the English batters find a way to use her line to push into the off side for runs.

Which is… better, obviously. But that run total after half the innings is atrocious. It really is.

Ok, England are crawling, we all know it, I’ll stop banging on it about it now and will just describe the crawl.

24th over: England 63-2 (Beaumont 20, Sciver 27) Carey tries to help the run rate along with a couple of wides as well as the obligatory couple of singles.

23rd over: England 59-2 (Beaumont 19, Sciver 26) Beaumont advances to King but doesn’t go big, gets an inside edge through midwicket for a run. Has not played a shot in anger all day.

21st over: England 52-2 (Beaumont 16, Sciver 23) This time it’s Sciver becalmed for five balls against King, though at least she’s trying to play a few shots, she just keeps finding the field.

20th over: England 51-2 (Beaumont 15, Sciver 23) Nicola Carey gets a bowl with her right-arm mediums, and wouldn’t you know, she hits her length right away and concedes two singles.

19th over: England 49-2 (Beaumont 14, Sciver 22) Outside edge for Sciver against Alana King to start the over, and because King can’t field to herself at deep third, it costs three runs. Brings Beaumont onto strike, who blocks out five balls on the forward stretch. Again… see the post below.

18th over: England 46-2 (Beaumont 14, Sciver 19) Another Sutherland over for two singles. According to the comms, going at 2.5 an over is fine actually because you can keep wickets in hand to attack at the end. I would counter that attacking at the end is not going to be easy in tricky batting conditions, especially for new players, and that scoring singles more regularly at the start and in the middle means there is less ground to make up late.

Of course England’s players want to score, but there’s a lack of adaptability to turn good bowling into a few runs instead of dot after dot after dot.

17th over: England 44-2 (Beaumont 13, Sciver 18) Trying to push the pace a bit is Sciver, backing away and cutting King through extra cover in the end, splitting the field there and going for four. A couple of singles as well from the over.

16th over: England 38-2 (Beaumont 12, Sciver 13) Width to Sciver, would have pitched outside the tram tracks, but she reaches out and makes contact just before the ball hits the ground, driving it behind point. Follows with a single.

Beaumont can’t score. Both in the specific and the general. She finishes the over with 12 from 48 balls. I understand that she’s trying to do a job for the team, but… that’s not the job.

15th over: England 33-2 (Beaumont 12, Sciver 8) Spin for the first time today, Alana King flighting her leg-breaks and landing them well enough, bowling quite full and dipping the ball into the blockhole at times. Doesn’t turn much, three singles.

14th over: England 30-2 (Beaumont 11, Sciver 6) Now it’s Annabel Sutherland to bowl, and there is no respite for England. She hits the line and length right away, testing the batters outside off stump. Two singles only.

13th over: England 28-2 (Beaumont 10, Sciver 5) An attempt to get going from Sciver, cutting McGrath from not too short a length over backward point. Alana King has been Selley’s No More Gaps at deep third, saved lots of runs there in the last match and again makes four into two with a tumbling stop here. The only scoring shot from the over.

12th over: England 26-2 (Beaumont 10, Sciver 3) Perry’s sixth over, more blocking and leaving, a couple of singles. England going nowhere and making a slow job of doing it.

11th over: England 24-2 (Beaumont 9, Sciver 2) Sciver off the mark driving down the ground, Beaumont another single, and McGrath bowls another wide.

10th over: England 20-2 (Beaumont 8, Sciver 0) Perry rolls on into her fifth over. Beaumont leaving, eventually taking a run to the leg side before Sciver is beaten. That concludes a truly parlous opening ten overs for England. Just like last time, they have gone nowhere and lost wickets in the process.

The golden season for Tahlia McGrath continues. Comes on to bowl, a couple of wides, a leg bye, nothing doing. But the last ball of her over, her first ball to Heather Knight, after bowling length for the previous seven deliveries, she throws in a yorker. Spot on. Knight is surprised by the length, expects the line to tail in at the stumps a bit, and instead it goes on straighter, misses the bat on middle, and hits off stump. Pew pew.

8th over: England 16-1 (Beaumont 7, Knight 9) Quite the battle! Knight gets forward and drives Perry on the up through cover for four, lovely shot. So Perry goes shot, and Knight under-edges into her stomach, very hard. Knocks the wind out of her, and she takes a minute on her haunches and gets a physio check. Alyssa Healy wanders up and suggests that the problem is Knight is too fit – needs more stomach for protection, says Healy while patting her own tummy. When the game resumes, Perry beats the outside edge twice.

7th over: England 12-1 (Beaumont 7, Knight 5) Dicey second run! Beaumont flicks behind square again, the field is more stacked in that area now and there’s no second run to Gardner, I think it was, charging around. But Beaumont goes anyway, and gets lucky with Gardner throwing wide of the stumps. Knight going to the other end hesitated, and might have been in strife had the throw gone that way too. Beaumont calms down, and follows with a single wide of mid on.

6th over: England 8-1 (Beaumont 4, Knight 4) Beaumont again goes drive and run, this time more safely to the left of Jonassen, and that’s the first run from Perry’s bowling. Knight follows it with four, leaning over a straight ball to drive through midwicket. She’s always the classiest strokeplayer in this England team. Gets beaten on the outside edge by Perry to follow.

5th over: England 3-1 (Beaumont 3, Knight 0) Beaumont remains pinned down by Schutt, but at least is looking for a way off the corkboard. Walks at the bowler to try to make room on the leg side, then shifts away to hit to mid off and run. That was a desperation single, could have been strife had Jonassen picked up cleanly, but she rolls her ankle a bit and ends up hobbling. Says she’s fine to carry on.

4th over: England 2-1 (Beaumont 2, Knight 0) If the idea of England batting first here was to learn from mistakes, they’re not so far. Knight faces out an over from Perry, defending. Three overs in a row without a run. You can’t just let Australia bowl at you like this, same as England did last time around.

3rd over: England 2-1 (Beaumont 2, Knight 0) Six dot balls from Schutt to Beaumont, the batter just blocking her way through to make sure nothing further goes wrong.

2nd over: England 2-1 (Beaumont 2, Knight 0) Captain to the middle early, Knight with a job to do as ever. Made a first-baller in the first ODI in Canberra. No Darcie Brown to face here though. She gets through four balls from Perry, including a good one that just sneaks past the edge.

Oh dear. Emma Lamb’s first ball in ODIs is a comfortable one, able to leave on width from Perry. Her second ball comes in at the stumps, seams away just a touch, and Lamb exacerbates that movement by playing too much across the ball. Misses it, bowled off stump.

1st over: England 2-0 (Beaumont 2, Lamb 0) Tammy Beaumont takes the first ball, Megan Schutt as ever piloting it like a remote-controlled aeroplane from a wide line in towards the stumps. Falls over a bit trying to work the first three balls to leg, straight to the field, but finds that shot from the fourth to clip two runs behind square.

Play is about to start at the Junction. Lamb and Beaumont to the middle.

News in: Hannah Darlington has pulled out of the World Cup squad, “citing mental health and wellbeing reasons.” She’s only 20 years old, captained the Thunder in the Big Bash this year, and is highly rated. She was the travelling reserve in that squad though, so spending two months in intense biosecure environments while almost certainly not playing might not be as appealing as a tour might usually be. Heather Graham is replacing Darlington in that spot.

Three changes for England – and why not? The series is gone. Emma Lamb comes in at the top for Lauren Winfield-Hill (no jokes about where lambs are proverbially led, please). Tash Farrant and Freya Davies come in to bowl seam. Katherine Brunt was already out, seamer Kate Cross goes out, then they make space for the other bowler by dropping middle-order bat Sophia Dunkley, moving Danni Wyatt up to six, and spinner Sophie Ecclestone to seven. Long tail, but might as well give everyone a shot. Dunkley is firmly in the World Cup plans, Wyatt is still a maybe.

For Australia? No changes. The luxury of winning. Beth Mooney and Darcie Brown played the first ODI but got rested for the second, and stay rested ahead of the World Cup. Seven all-rounders and a keeper who opens the batting. Pretty handy team.

England win the toss and will bat

This is interesting. Each team won one toss in the first two games, and chose to chase. But England were embarrassed while batting first in the second match, all out for 129 in 45 overs. Against some decent bowling but still a horrible display. Heather Knight is a staunch character: is this her way of saying, we put this right and we do it now? Same venue at Melbourne’s Junction Oval, same start time at 10am locally, as England opt for take two.

One game to go! And you might offer forgiveness if someone, just a random imaginary person, were to feel a little bit flat about this given the dominance with which Australia grabbed the series and the corresponding way that England folded in the previous two outings.

That was not consistent with the multiformat series beforehand. England launched into the first T20, getting beaten by a masterful performance but giving a good account. Had the next two T20s rained off, but then produced one of the best women’s Test matches while going all out to win. Ended up with a draw, thanks to a batting collapse. Sign of things to come. In the two one-dayers so far, it has been all batting collapse, no batting.

But the 50-over World Cup is around the corner, so there is still a strong incentive for England to put things right, and for Australia to keep the foot to the floor. Away we go once more.