The gigantic Stratolaunch aircraft successfully performed its fourth test flight on Thursday, taking to the skies over the Southern California desert for almost two hours.

Described as the largest plane in the world due to its 383-foot wingspan, Stratolaunch lifted off from the Mojave Air and Space Port in California at 15:23 EST (18:23 GMT).

The H-shaped aircraft stayed aloft for a total of one hour and 43 minutes, reaching a maximum altitude of 15,000 feet (4,572 meters) and maximum speeds of 178mph, although it can reach up to 530mph.

‘Test flight 4’ had intended to retract all landing gear into the plane for the first time but the flight was cut short due to a vibration issue and warning light going on after an hour into the flight.

However, the plane came back to the Mojave airport and did four flybys to make sure it was still performing as expected and to burn off extra fuel before landing safely.

Three people were in the massive aircraft on Thursday – two pilots and one flight engineer.

With a wingspan of 383 feet, Stratolaunch is wider than the length of a football pitch from goal to goal, which is generally around 345 feet.

It’s been developed by a firm of the same name founded in 2011 by the late Microsoft co-founder Paul Allen, which is said to be aiming for full operational capability by mid to late 2023.

Once operational, it will launch reusable hypersonic flight research vehicles for paying customers. 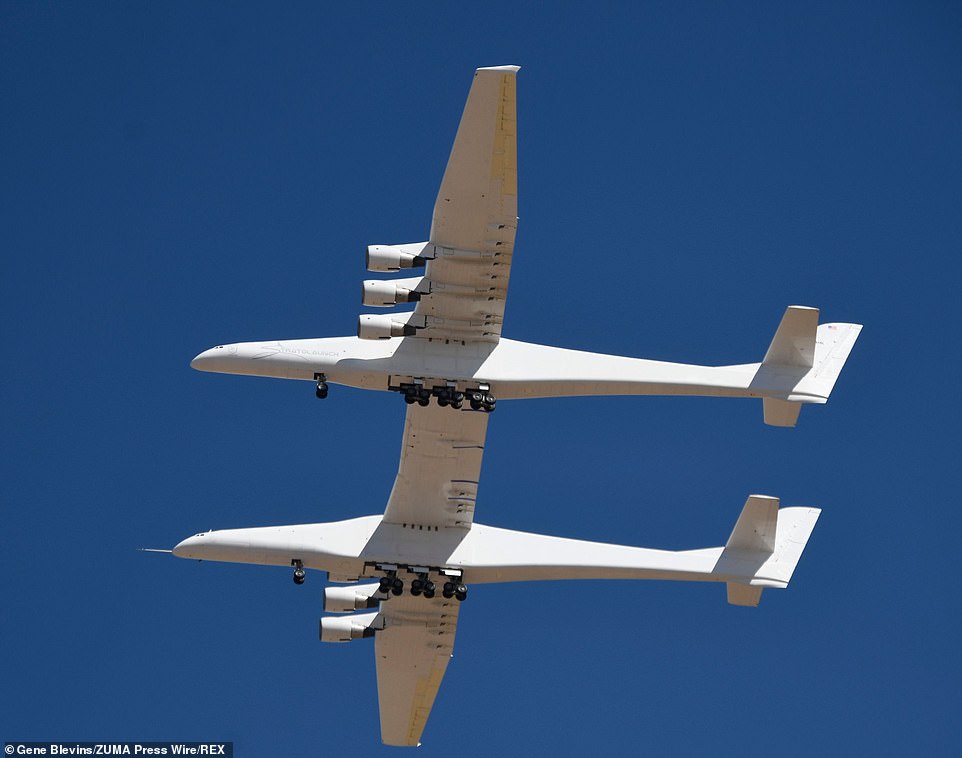 The biggest plane in the world Stratolaunch known as ‘The Roc’ does its test flight 4 runs on Thursday, Mojave, California, February 24, 2022 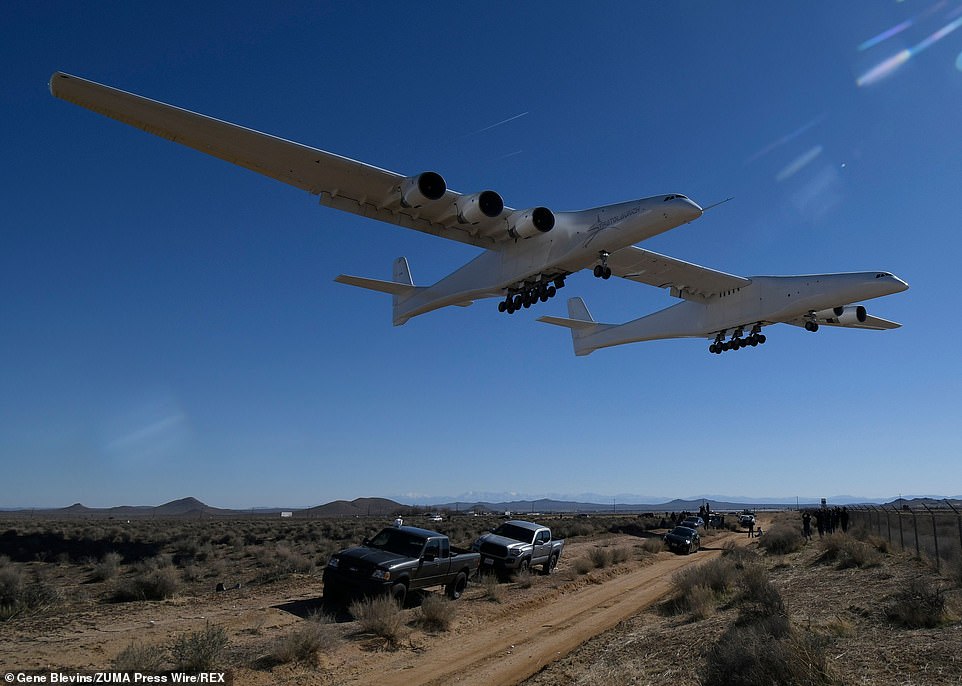 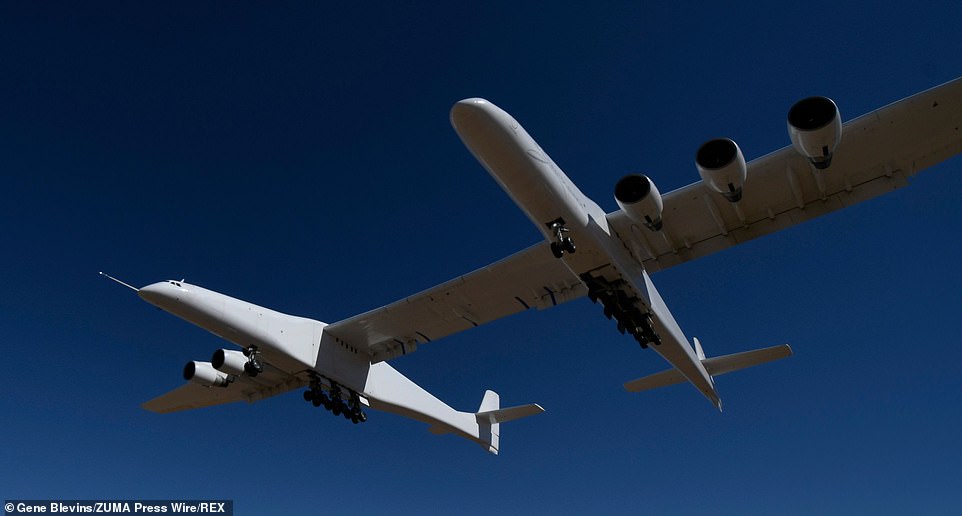 With a wingspan of 383 feet, Stratolaunch is wider than the length of a football pitch from goal to goal, which is generally around 345 feet

Allen died at the age of 65 in October 2018 due to complications from non-Hodgkin’s lymphoma, less than a year before Stratolaunch flew for the first time.

When the Stratolaunch company was founded in 2011, the project’s cost was initially estimated to be a whopping £215 million ($300 million) – but it was valued even higher in 2019, at $400 million, according to CNBC.

The company is also developing Talon A, a reusable, rocket-powered, hypersonic flight vehicle that would be carried aboard the airplane.

‘The full landing gear retraction and extension brings the carrier aircraft closer to operational status, a milestone that is necessary to ready the aircraft for Talon-A separation and hypersonic flight tests later this year.’

Stratolaunch has twin fuselages much like a catamaran, a multi-hulled watercraft featuring two parallel hulls of equal size.

Stratolaunch takes a three-person crew – pilot, co-pilot and flight engineer – who sit in the right-hand fuselage, steering the plane a fair distance to the right of the centerline, a bit like the Millennium Falcon in Star Wars.

Although, as Paul Allen’s website points out, ‘put it next to the Millennium Falcon and it’s double the size’. 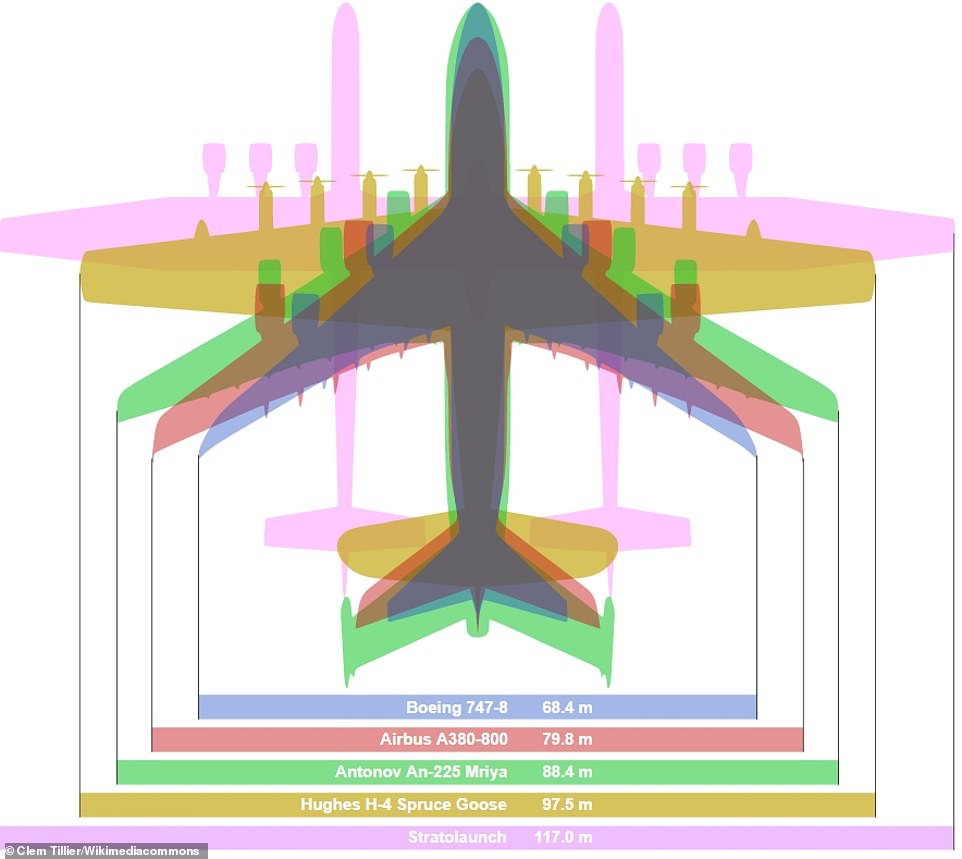 Illustration shows how the width of the plane compares to some of its notable rivals, including Boeing 747 and Airbus A380 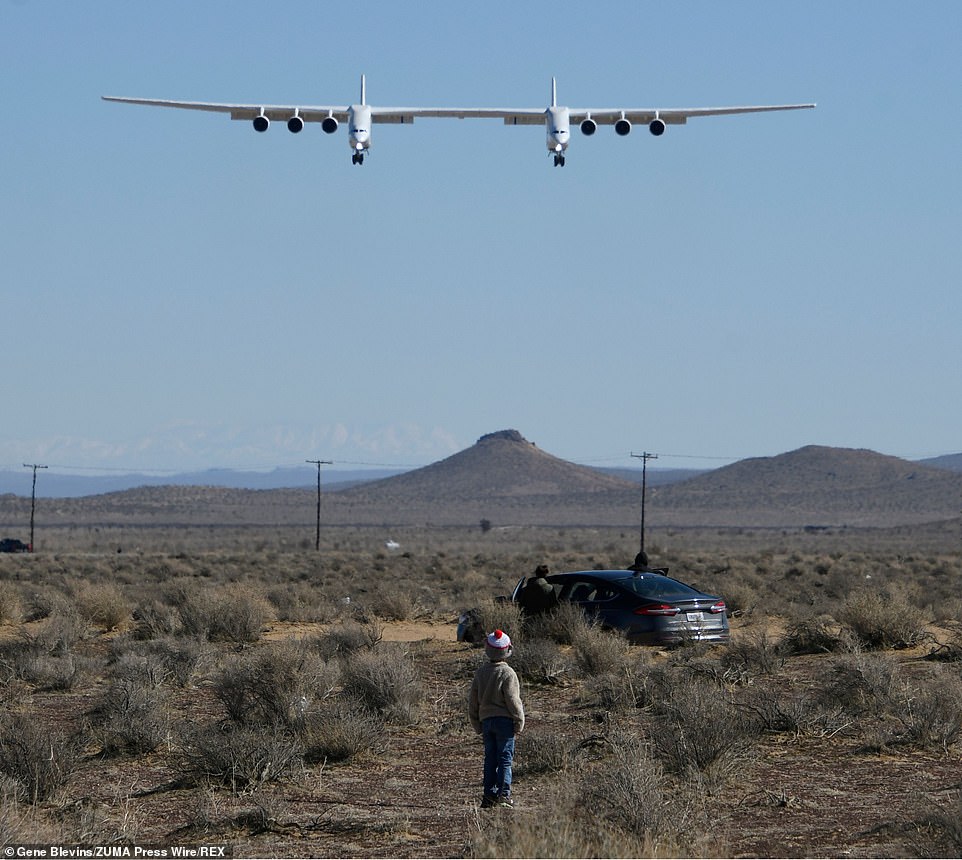 A little boy looks on in California as the Stratolaunch aircraft successfully performs its fourth test flight on Thursday, February 24 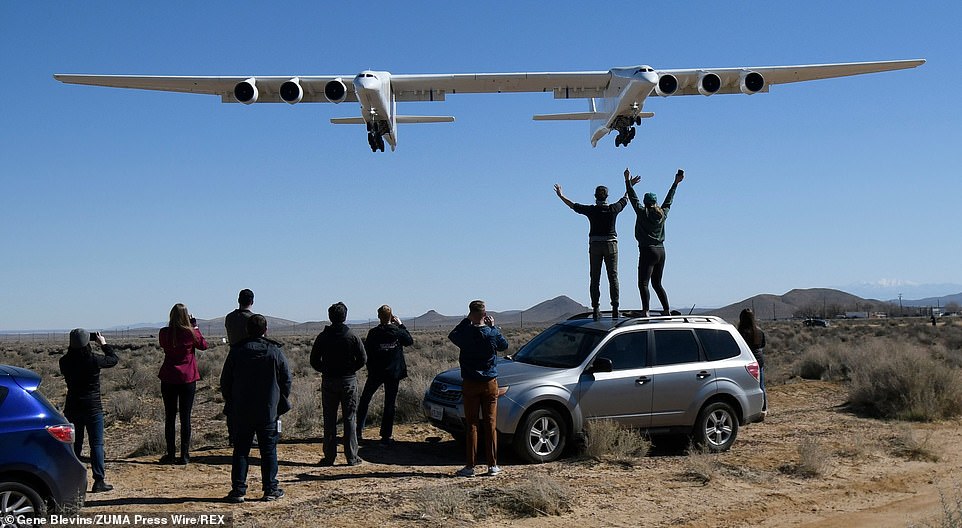 People look on at the biggest plane in the world – Stratolaunch know as ‘The Roc’ does its test flight 4 runs Thursday, Mojave, California on February 24, 2022 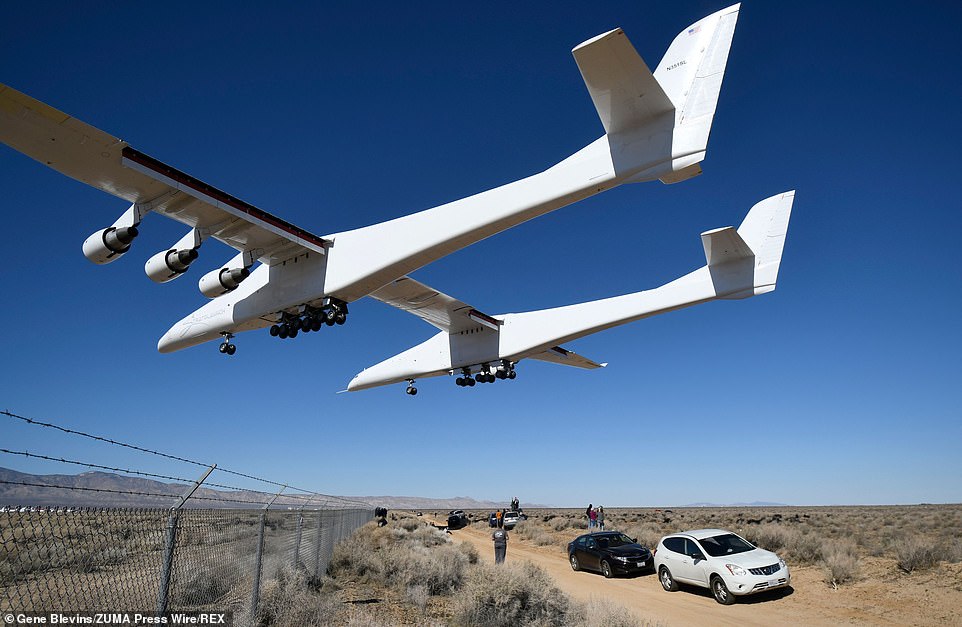 Stratolaunch takes a three-person crew – pilot, co-pilot and flight engineer – who sit in the right-hand fuselage, steering the plane a fair distance to the right of the centreline, a bit like the Millennium Falcon in Star Wars. Pictured, test flight 4

The left-hand fuselage has what looks like a cockpit with windows to onlookers, but the section is in fact empty and unpressurised.

Powered by the same type of engines used by Boeing 747s, Stratolaunch weighs approximately 500,000 pounds without any cargo. But the aircraft could take off at a maximum weight of 1.3 million pounds (589,676 kilograms).

As well as its record-breaking width, Stratolaunch has an impressive height – it stands 50 feet from the ground to the top of its vertical tail.

‘At just over four stories tall, stand a humpback whale beside it and it would have trouble seeing over the top of the plane,’ PaulAllen.com says. 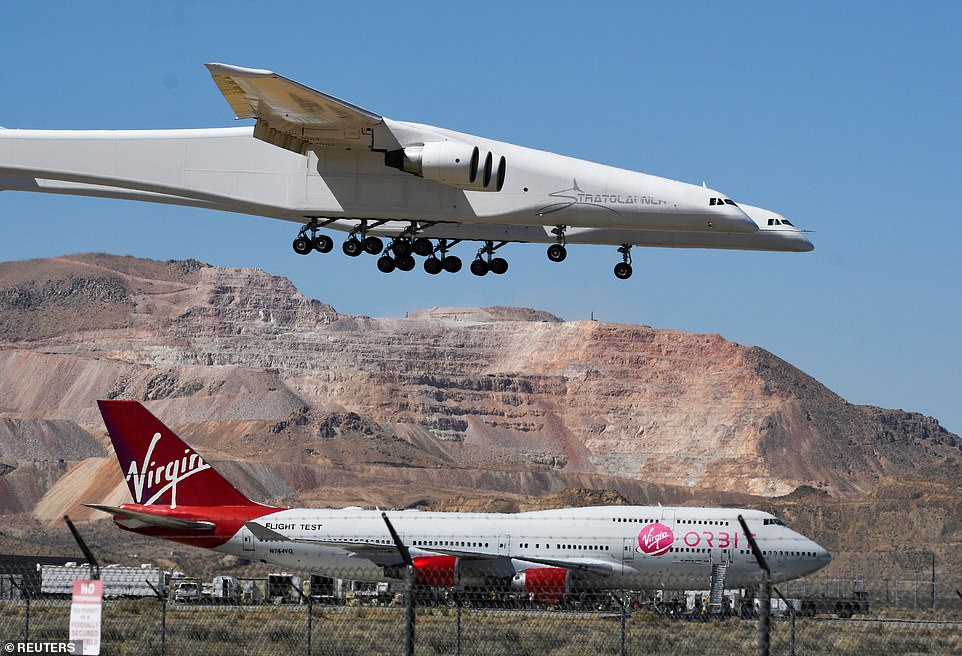 Following test flights, Stratolaunch is vying to be a contender in the satellite launch market. Here, Stratolaunch comes in for a landing over Virgin Orbit 747 Cosmic Girl after it performed a 2nd test flight in Mojave, California, April 29, 2021 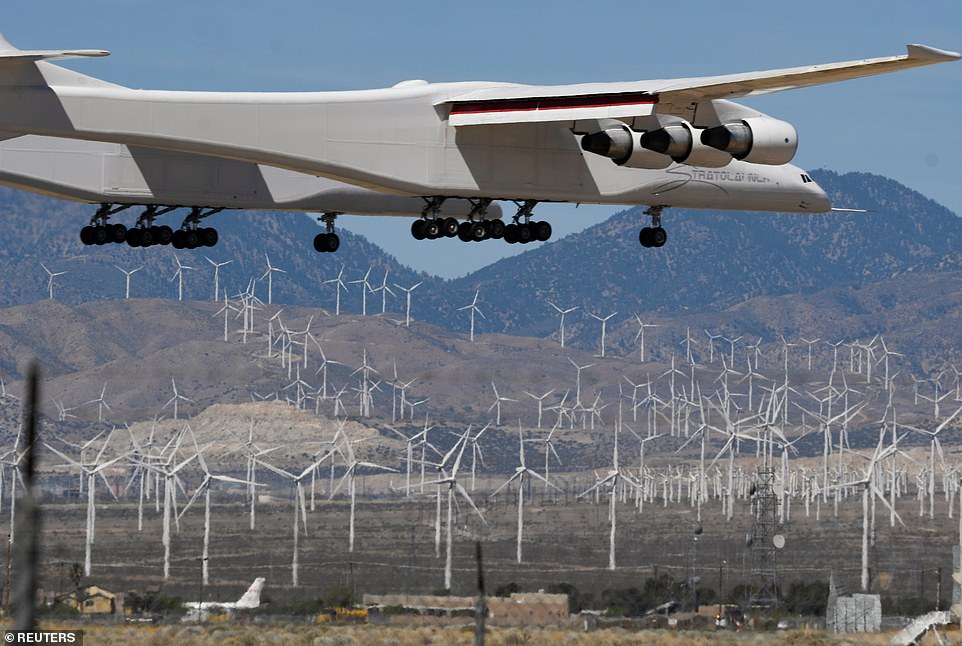 The Stratolaunch plane, the world’s largest, does its 2nd test fight as it comes in for a landing after it performed a 4hr test flight in Mojave, California, April 29, 2021

Its first and second official test flights were both conducted in April 2021, although it first took to the air in April 2019.

Following its first maiden flight in April 2019, Stratolaunch underwent a change of ownership, and reports emerged that the company was due to cease operations completely.

Sources close to Stratolaunch at the time revealed the company’s assets were being shopped to potential buyers by parent firm Vulcan. 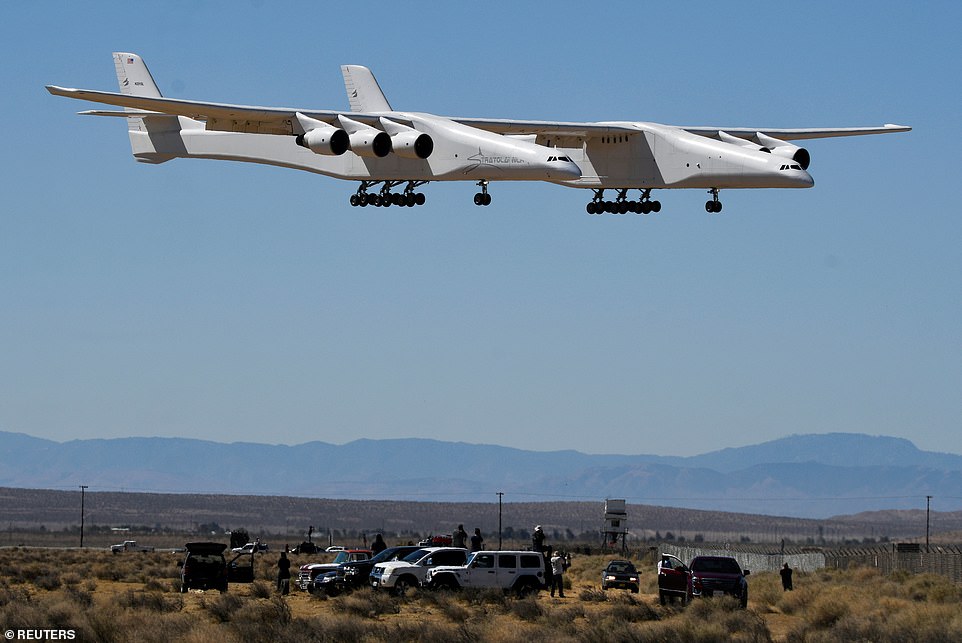 The company is also developing Talon A, a reusable, rocket-powered, hypersonic flight vehicle that would be carried aboard the airplane. Pictured, the second test flight in April 2021 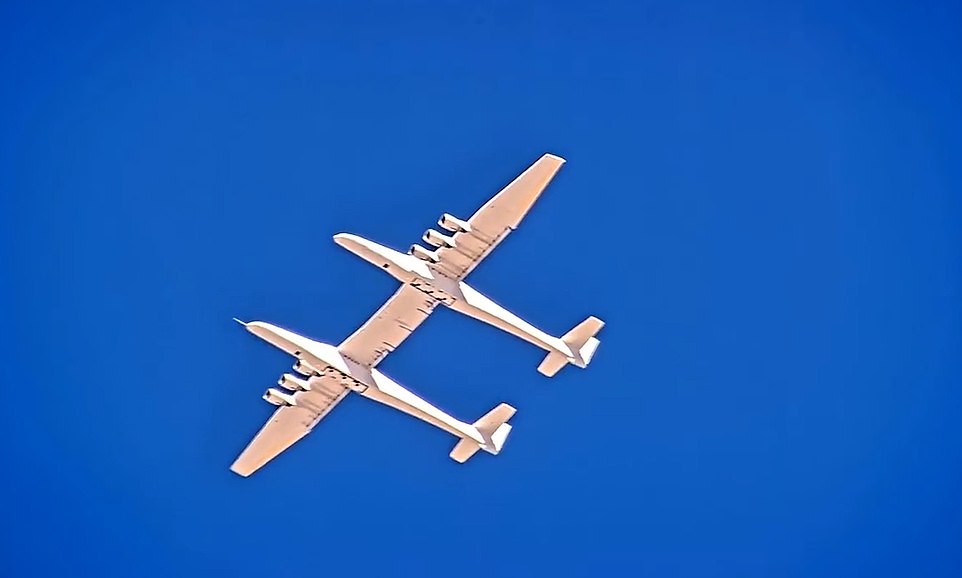 But Stratolaunch was bought out by Cerberus Capital Management, reports in December 2019 revealed, and the company’s staff count has since grown.

Allen intended to use it as a carrier aircraft for space launches, carrying satellite-laden rockets beneath the centre of the wing and releasing them at high altitude.

New owners of the ambitious operation initially plan to use it as a carrier aircraft for launches of reusable hypersonic flight research vehicles.

The Stratolaunch aircraft emerged from its Mojave hangar for the first time in May 2017 and proceeded through ground tests, including taxiing and rolling down a runway at near-takeoff speeds. 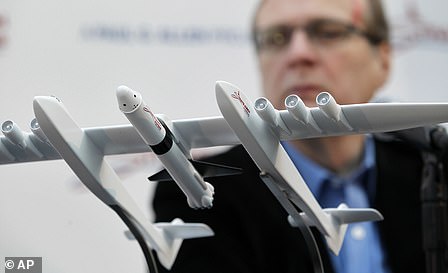 Microsoft co-founder Paul Allen looks across at a model of a giant airplane and spaceship. Allen died Monday in Seattle from complications of non-Hodgkin’s lymphoma, aged 65.

Allen used the fortune he made from Microsoft – whose Windows operating system is found on most of the world’s desktop computers – to invest in other ambitions, from tackling climate change and advancing brain research to finding innovative solutions to solve some of the world’s biggest challenges.

The SpaceShipOne technology was licensed by Sir Richard Branson for Virgin Galactic, which is testing a successor design to carry tourists on brief hops into lower regions of space.

‘If it has the potential to do good, then we should do it,’ Gates quoted his friend as saying.

Allen died Monday in Seattle from complications of non-Hodgkin’s lymphoma, according to his company Vulcan Inc. He was 65.

Just two weeks ago, Allen, who owned the NFL’s Seattle Seahawks and the NBA’s Portland Trail Blazers, had announced that the same cancer he had in 2009 had returned.

Gates, who met Allen at a private school in Seattle, said he was heartbroken to have lost one of his ‘oldest and dearest friends.’

‘Personal computing would not have existed without him,’ Gates said in a statement, adding that Allen’s ‘second act’ as a philanthropist was ‘focused on improving people’s lives and strengthening communities in Seattle and around the world.’

‘Commercial no-brainer’: why role of happiness officer is taking off | Health & wellbeing