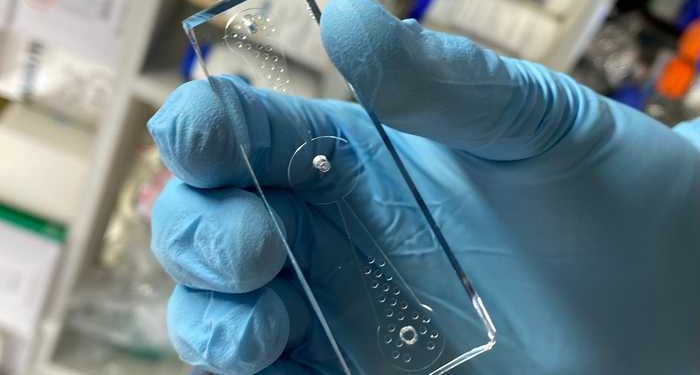 
Dogs can use their incredible sense of smell to sniff out various forms of cancer in human breath, blood and urine samples. Similarly, in the lab a much simpler organism, the roundworm C. eleganswriggles its way toward cancer cells by following an odor trail. Today, scientists report a device that uses the tiny worms to detect lung cancer cells. This “worm-on-a-chip” could someday help doctors noninvasively diagnose cancer at an earlier stage.

The researchers will present their results today at the spring meeting of the American Chemical Society (ACS). ACS Spring 2022 is a hybrid meeting being held virtually and in-person March 20-24, with on-demand access available March 21-April 8. The meeting features more than 12,000 presentations on a wide range of science topics.

Early diagnosis of cancer is critical for effective treatment and survival, says Nari Jang, a graduate student who is presenting the work at the meeting. Therefore, cancer screening methods should be quick, easy, economical and noninvasive. Currently, doctors diagnose lung cancer by imaging tests or biopsies, but these methods often can’t detect tumors at their earliest stages. Although dogs can be trained to sniff out human cancer, they aren’t practical to keep in labs. So Jang and Shin Sik Choi, Ph.D., the project’s principal investigator, decided to use worms called nematodes, which are tiny (~1 mm in length), easy to grow in the lab and have an extraordinary sense of smell, to develop a noninvasive cancer diagnostic test.

“Lung cancer cells produce a different set of odor molecules than normal cells,” says Choi, who is at Myongji University in Korea. “It’s well known that the soil-dwelling nematode, C. elegansis attracted or repelled by certain odors, so we came up with an idea that the roundworm could be used to detect lung cancer.” Other researchers have placed nematodes in petri dishes and added drops of human urine, observing that the worms preferentially crawled toward urine samples from cancer patients. Jang and Choi wanted to make an accurate, easy-to-measure form of the test.

So the team made a chip out of polydimethylsiloxane elastomer that had a well at each end connected by channels to a central chamber. The researchers placed the chip on an agar plate. At one end of the chip, they added a drop of culture media from lung cancer cells, and at the other end, they added media from normal lung fibroblasts. They placed worms in the central chamber, and after an hour, they observed that more worms had crawled toward the lung cancer media than the normal media. In contrast, worms that had a mutated odor receptor gene called odr-3 did not show this preferential behavior.

Based on these tests, the researchers estimated that the device was about 70% effective at detecting cancer cells in diluted cell culture media. They hope to increase both the accuracy and sensitivity of the method by using worms that were previously exposed to cancer cell media and therefore have a “memory” of cancer-specific odor molecules. Once the team has optimized the worm-on-a-chip for detecting cultured lung cancer cells, they plan to move on to testing urine, saliva or even exhaled breath from people. “We will collaborate with medical doctors to find out whether our methods can detect lung cancer in patients at an early stage,” Choi says. They also plan to test the device on multiple forms of cancer.

In other studies using the worm-on-a-chip, the researchers identified the specific odor molecules that attract C. elegans to lung cancer cells, including a volatile organic compound called 2-ethyl-1-hexanol, which has a floral scent. “We don’t know why C. elegans are attracted to lung cancer tissues or 2-ethyl-1-hexanol, but we guess that the odors are similar to the scents from their favorite foods,” Jang says.

The researchers acknowledge support and funding from the National Research Foundation of Korea.

ACS Spring 2022 will be a vaccination-required and mask-recommended event for all attendees, exhibitors, vendors, and ACS staff who plan to participate in-person in San Diego, CA. For detailed information about the requirement and all ACS safety measures, please visit the ACS website.

The American Chemical Society (ACS) is a nonprofit organization chartered by the U.S. Congress. ACS’ mission is to advance the broader chemistry enterprise and its practitioners for the benefit of Earth and all its people. The Society is a global leader in promoting excellence in science education and providing access to chemistry-related information and research through its multiple research solutions, peer-reviewed journals, scientific conferences, eBooks and weekly news periodical Chemical & Engineering News. ACS journals are among the most cited, most trusted and most read within the scientific literature; however, ACS itself does not conduct chemical research. As a leader in scientific information solutions, its CAS division partners with global innovators to accelerate breakthroughs by curating, connecting and analyzing the world’s scientific knowledge. ACS’ main offices are in Washington, D.C., and Columbus, Ohio.

Abstract
Early diagnosis of cancer is important to reduce the mortality rate of patients and to increase the success rate of treatment. Along with the early diagnosis, an easy, economical, rapid, non-painful and non-invasive diagnostic method is also required for reducing the number of severe cancer patients. Many researches have been recently studied to discover and identify an odorant molecule specifically from tumor tissues or cancer patients’ blood, saliva, urine and exhaled breath. A previous study has suggested that 2-ethyl-1-hexanol might be a biomarker or one of the specific volatile organic compound (VOC) occurring in the lung cancer tissue and patient. In this study, we investigated a novel lung cancer diagnosis system using C. elegansa nematode which responded to cancer-specific odorant molecules with chemotaxis behaviors, attraction or avoidance. C. elegans wild-type strains showed a specific and typical chemotaxis behavior responding to the 2-ethyl-1-hexanol and cell culture media of normal lung fibroblast (MRC-5) and lung cancer cell (SK-MES-1), respectively. However, the mutant strain defective in a specific G protein α (odr-3) lost those specific behaviors. Taken together, the olfactory sensing of odorant molecules from cancer tissue has a potential for an easy, economical, rapid, non-invasive cancer diagnostic tool.

The Biggest Winners and Losers So Far