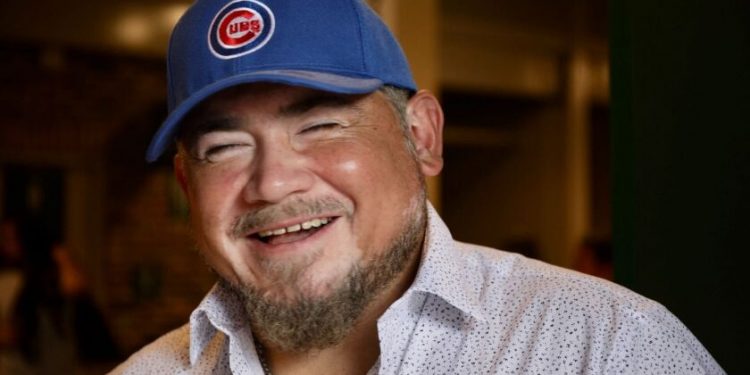 
When Sergiu Doloscan thought about the United States as a kid in Moldova, growing up behind the Iron Curtain, he pictured images from his favorite movie: “Terminator.”

Eventually the idea of a time traveling cyborg assassin was replaced with two other concepts: freedom and democracy.

“Those were things we didn’t have,” Doloscan, 37, said Thursday at Wrigley Field, where he became a United States citizen along with 655 other people from more than 90 other countries.

It was the largest naturalization ceremony ever held by the Federal District Court in Northern Illinois.

“I feel very, very good today,” said Doloscan, a truck driver who came to the United States six years ago. He now lives in Huntley with his wife and two sons.

Jesus Escontrias, 51, originally of Durango, Mexico, came to the United States 35 years ago.

“I came here for a better life. A better everything,” said Escontrias, who lives in Woodstock and works in a foundry. “This is the conclusion of that.”

Eduardo Martinez was 25 when he came here to the United States from Guatemala on a visa and got a job making salads at an Italian restaurant in Evanston.

“At the time, the United States was an idea to me that you can make money or find money anywhere, which is not true. You have to work for it,” said Martinez, 46, who’s now the executive chef of a restaurant in Palos Heights.

Despite living in the United States for more than two decades, Martinez said that citizenship put an “official stamp” on his American dream.

“To celebrate, I’m going to go out to eat with my family and register to vote,” he said.

Thursday’s ceremony was the second held at Wrigley. The first was held last year and resulted in 172 new citizens.

The emotional affairs, normally reserved for a 25th-floor courtroom in the Dirksen Federal Building downtown, have been held at a variety of alternative spaces during the pandemic. Other venues have included the Chicago Botanic Garden and the Auditorium Theatre.

“We bring together two things that could not be more American — baseball and the welcoming of new citizens to our country,” Mike Lufrano, community affairs executive vice president for the Cubs, told the new citizens during the 45-minute ceremony.

Workmen with paint rollers paused to occasionally watch the ceremony as they applied a fresh coat of green paint to the bleachers.

Linda Ekendahl grew up in Sweden reading “Sweet Valley High,” a series of young adult novels about American teens, and became enchanted with the idea of becoming a cheerleader.

When she moved to United States in high school with her family, her dream came true.

She went on to cheer at the University of Connecticut and now lives in Park Ridge.

“Now that I’m a citizen I can vote and run for office. Watch out!” joked Ekendahl.

The ballpark briefly became the nation’s largest federal courtroom to provide the proper setting for ceremony.

The federal district court seal — an eagle holding a red, white and blue shield — was beamed onto the giant video screen in left field.

The word “welcome” in dozens of languages was on the video screen in right field.

Chief Judge Rebecca R. Pallmeyer, a Cubs fan, got the ball rolling on having a special naturalization ceremony at a Chicago sports arena after she took the reins at Chicago’s federal courthouse in 2019.

“I know the Ricketts family would love for all of you to become devoted Cubs fans, but let me remind you, to appreciate Wrigley Field, you don’t need to root for a single baseball team, nor are you required to abandon your favorite soccer team or cricket club from home,” Pallmeyer said Thursday.

The Cubs provided Cubs hats to all new citizens, who sat behind the Cubs dugout along the third base line during the ceremony.

Alabama Teens Allegedly Killed 71-Year-Old Man, Buried Him, & ‘Partied In His House’ Until They Were Arrested

Stop overlooking bards – life wouldn’t be the same without them

Stop overlooking bards - life wouldn't be the same without them