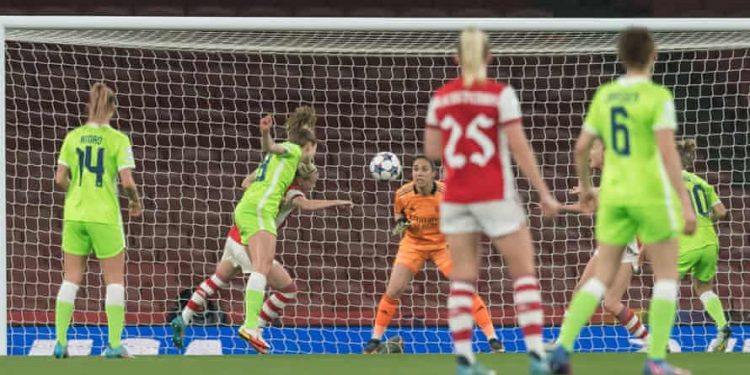 
The smile said it all. Lifelong Arsenal fan Lotte Wubben-Moy’s equaliser late on salvaged a 1-1 draw against Wolfsburg in the first leg of their Champions League quarter-final and she beamed widely. Tabea Wassmuth had given the German side a first-half lead but Wubben-Moy’s strike, in her first start at the Emirates, ensured Arsenal travel to Germany next week with the tie level.

The gulf between England’s best and Champions League royalty was in evidence again as Arsenal, despite seeing far more of the ball than they had against Barcelona in December at this ground, were made to look as ordinary as they make teams in the Women’s Super League look week in, week out.

Wolfsburg, having competed in five of the last nine finals, winning twice in 2013 and 2014, understand what it means to progress in the Champions League. Under the floodlights at the Emirates, it was the home team – the only English side to have won a women’s European Cup but were absent from the competition from 2015 to 2018-19 – that began brightly. In the opening minute, England forward Beth Mead dragged her shot wide after she was slipped through on the left by Stina Blackstenius.

“They play a little bit differently to the teams we play regularly, they have a different style,” said the Arsenal manager, Jonas Eidevall, prior to the game. “Wolfsburg are very, very good on the counter attack, and we haven’t played a team so far this season that has been that good on the counter. At the same time, I don’t think they have been exposed to our style of football either.”

Arsenal were dominant in possession, playing with a fluidity and confidence that had been missing from their two group stage encounters with the seemingly unstoppable Barcelona and against Hoffenheim on the road. Yet Wolfsburg were decidedly untroubled by their lack of the ball or Arsenal’s style. In fact it suited their counter-attacking game; while Arsenal worked hard to play their own way, Wolfsburg waited for their moment to pounce.

Midfielder Lia Wälti had warned that underestimating Wolfsburg would be a big mistake. The possession stats at half-time told one story, with Arsenal controlling 58% of the game, but the shots on target revealed the other side. Beth Mead cutting inside before firing straight at goalkeeper Almuth Schult was Arsenal’s sole effort on target in six attempts.

Meanwhile, Wolfsburg finished the half with three attempts, each on target, and one yielding the goal that gave them the edge. In the 19th minute, Joelle Wedemeyer knocked the ball back into the middle of the six-yard box and Wassmuth squeezed past Mead to head under the falling Manuela Zinsberger.

The second half began in a similar vein, with Arsenal pulling the strings and Wolfsburg apparently happy to let them. There was a brief moment of celebration for the fans in attendance as Wälti pinged a ball through to Blackstenius from deep and the Swede rounded Schult neatly before firing into the empty net, but the flag was quickly whipped up for offside.

Shortly after, Mead’s ball across the face of goal was narrowly missed by a sliding Vivianne Miedema, but once again the German team would carve open the Arsenal backline. First, the goalscorer Wassmuth, who scored four times against Chelsea in the group stages, crashed her strike off the inside of the post and the ball bounced clear. Within seconds Lena Lattwein found Svenja Huth, but the forward could only turn it against the other post and Arsenal were able to scramble it away.

Eidevall turned to his bench in search of a an equaliser, bringing on US World Cup winner Tobin Heath, midfielder Frida Maanum and England’s Nikita Parris, but it would be young centre-back Wubben-Moy that would pull them back into the tie, collecting Heath’s weak free-kick and hammering home.

“I genuinely think being a fan of the team you play for gives you 10% more when you’re playing,” Wubben-Moy told the Guardian in December. “If that’s what wins you a game, it’s those little percentages that makes a difference. Then be a fan of any club that you can and play at that club, because it’s an amazing experience.”

There’s a League of Legends novel on the way • Eurogamer.net

There's a League of Legends novel on the way • Eurogamer.net