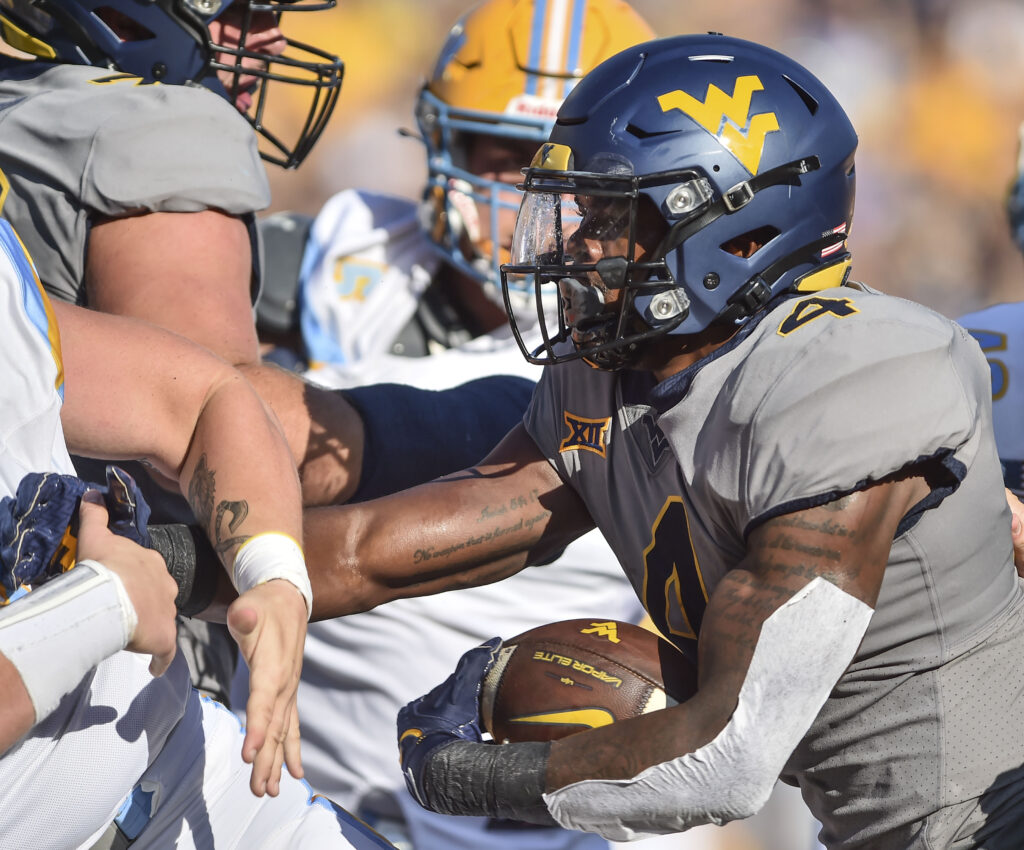 MORGANTOWN — WVU washed its hand with Long Island last week and accomplished almost everything it wanted to in the 66-0 win — emptied the bench to get a lot of playing time, pitched a shutout on defense, and found playing time for both Jarret Doege and Garrett Greene at quarterback.

The game did, however, throw up a red flag not many saw coming. The Mountaineers (1-1) struggled in the running game for the second week in a row, which is surprising considering Leddie Brown is one of the best returning running backs in the Big 12.

Not only that, but the offensive line returned five players with starting experience and was hailed as one of the strengths of the team during fall camp. It has not performed to the level many expected, and with the dangerous front seven of Virginia Tech coming to Morgantown on Saturday, now is the time to figure out how to make it right, according to the WVU coaching staff.

“We’ve got to continue to improve on our physicality, it’s still not where we need it to be,” Brown said. “We had a couple of mental errors in pass protection there on the first two drives (against Long Island) that shouldn’t happen. We’ve got to do better. VT has good players. They do a really good job within their scheme, but we’ve got to get better fundamentally and we’ve got to get more physical up front, and that’s the challenge for us this week.”

In Week 1 at Maryland, WVU had just 48 rushing yards — 73 if you eliminate quarterback sacks — and the starting unit of Leddie Brown and crew only had 31 yards on 15 carries against LIU.

UNC fared okay against VT in the running game, tallying 146 yards on 30 carries, but the Hokies completely shut down Middle Tennessee last week — 66 yards on 36 carries.

Being more physical is the theme of the week during game prep, especially in the trenches.

“We’ve got to practice,” Neal Brown said. “I think that’s the thing, we’ve got to demand it. Last week, footwork was better interior-wise, but still wasn’t what we needed at tackle. So, that’s a work in progress, and then physicality, we’ve just got to practice. We did that last week a little better; we’re just going to have to continue to do that and be really physical, and it’s good for our defensive line, as well.”

Offensive coordinator Gerad Parker also said outside of being physical, he wants good footwork and pad level, making sure the physicality is used properly and in a useful way.

The Mountaineer Ticket Office has announced the Virginia Tech game is officially sold out.

Fans still looking to purchase single-game tickets for the WVU-VT matchup are reminded to visit stubhub.com for potential availability.

The post WVU aware of struggling running game as it heads into Virginia Tech game appeared first on Dominion Post.