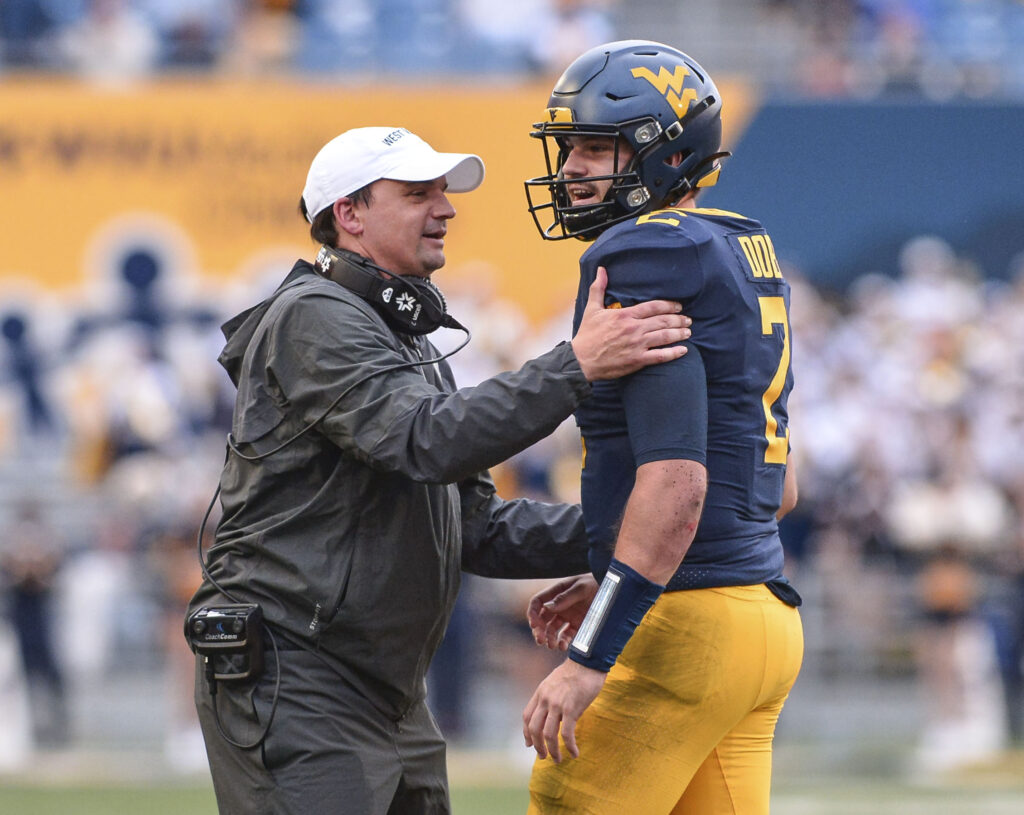 MORGANTOWN — A lot of the praise following WVU’s 38-31 upset win over Iowa State went to the likes of quarterback Jarret Doege, running back Leddie Brown, and wide receiver Bryce Ford-Wheaton and Winston Wright.

Coming in, the Cyclones hadn’t allowed more than 350 yards in their first seven games. The Mountaineers finished with 492 yards of total offense.

While the skill players grab the headlines, head coach Neal Brown pointed to the trenches why WVU (4-4, 2-3 Big 12) has shown major improvement offensively over the last two weeks compared to the first six games.

“We didn’t play as well up front early in the year as we thought we would,” Brown said. “It’s been a process to change that offensive line room — not that we haven’t had some good players here, we have — but we just haven’t had the depth and we’ve lacked strength at the point of attack. A lot of that is because we’re playing youth and we’re probably a year away from a depth standpoint of getting to where we want to be.”

During the winter and summer, the coaching staff had last season’s 42-6 final score against Iowa State plastered throughout the football facilities. Brown said the Cyclones won that game up front on offense and defense, and in January, set a goal to emulate what ISU head coach Matt Campbell has been able to do in a short amount of time.

On offense, it begins up front, and Brown credited his center for flipping the script.

“The first 2 1/2 years here, it was one of the weakest groups or one of the worst-performing groups when it came to our offseason program in the winter and summer, and that completely flipped,” Brown said. “The reason it flipped is because of guys like Zach Frazier — he set a standard.

“It really starts with Zach Frazier, he completely flipped the mentality of the offensive line and then what happens is, the o-line and the d-line always work out together and it’s really competitive in the offseason. They’re always challenging each other whether it’s in drills, whether it’s in the weight room, so they saw the o-line start picking up, then the d-line started picking up.”

Doege, who has struggled under pressure through the first half of the season, was not sacked against the Cyclones, who helped him throw for a WVU career-high 370 yards and three touchdowns.

The Big 12 announced that WVU’s Saturday home game against Oklahoma State will kick off at 3:30 p.m. on ESPN, while the road game at Kansas State on Nov. 13 will be televised on FS1 at noon.

This week’s game vs. Oklahoma State will be Military Appreciation Day and Mountaineers legend and College Football Hall-of-Famer Major Harris will have his No. 9 retired during an on-field presentation.