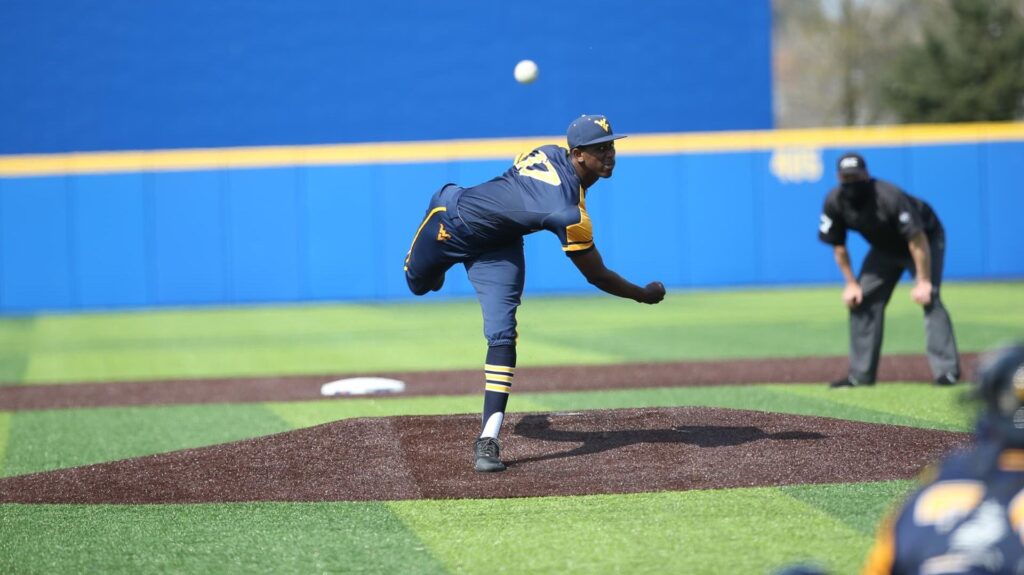 In the 201st edition of the Backyard Brawl, the Mountaineers took an early 1-0 lead, before the Panthers scored the final five runs of the day. WVU finished with one run on eight hits with one error, while Pitt tallied five runs on 12 hits with no errors.

Freshman right-handed pitcher Carlson Reed took the loss for WVU after allowing four runs on five hits in 2.1 innings of work. Pitt’s Chris Gomez was credited with the win.

The Mountaineers (11-12) got on the board early to take a 1-0 lead in the top of the first inning. WVU strung together three, two-out hits, including an RBI single off the bat of senior catcher/outfielder Paul McIntosh.

From there, Reed breezed through the first and got out of a bases-loaded jam in the second, before Pitt (14-10) got to the Marietta, Georgia, native in the third. The Panthers plated four runs in the frame to take a 4-1 lead.

After junior right-hander Zach Ottinger relieved Reed in the third, redshirt sophomore righty Noah Short got the final two outs of the fourth. He retired the side in the fifth and finished with a pair of strikeouts in 1.2, hitless innings.

Meanwhile, WVU went in order in the third, sixth and seventh. After Pitt tacked on another run in the bottom of the seventh, freshman infielder Mikey Kluska registered a two-out, infield single in the eighth but was stranded at first. WVU also tallied a base hit in the ninth but couldn’t put a late rally together.

Tuesday’s loss snapped WVU’s six-game win streak over the Panthers, dating back to 2016. Despite the setback, the Mountaineers lead the all-time series over Pitt, 109-92.

Seven different players tallied a hit for WVU in the loss. McIntosh led the way with a 2-for-4 effort at the plate.

Next up, West Virginia’s seven-game road trip concludes with a three-game, weekend series at Baylor, from April 9-11, in Waco, Texas. First pitch of Friday’s series opener is set for 8:30 p.m., while Saturday and Sunday’s games will begin at 4 p.m., and 1 p.m., respectively.

Mountaineers come in No. 5 in recent poll

MORGANTOWN, W.Va. – The West Virginia women’s soccer team checked in at No. 5 in this week’s United Soccer Coaches National Poll, the organization announced on Tuesday.

The Mountaineers (10-2, 7-2 Big 12) moved down one spot in the newly-released poll, despite earning a 1-0 win over then-No. 10 Virginia on April 3, at Dick Dlesk Soccer Stadium in Morgantown. However, WVU has now been included in the poll’s top five seven times during the 2020-21 campaign, including twice this spring.

West Virginia is once again one of three Big 12 teams featured in the poll, joining No. 3 TCU and No. 18 Oklahoma State.

No. 1 Florida State topped the rankings again this week, ahead of No. 2 North Carolina and No. 3 TCU. No. 4 UCLA and the Mountaineers rounded out the top five. Penn State checked in at No. 6, while No. 7 Duke, No. 8 Clemson, No. 9 Arkansas and No. 10 Georgetown completed the top 10.

Next up, the Mountaineers travel to No. 12 Virginia for their 2020-21 regular-season finale on April 10, in Charlottesville, Va.. Kickoff is set for 3 p.m.

Earlier this season, Carey secured his 700th career victory after defeating LSU, 62-42, on Nov. 28, in the South Point Thanksgiving Shootout. In his 33 seasons of coaching, the Clarksburg, W.Va., native has amassed a career record of 720-325. Carey is one of eight coaches nationally who surpassed 700 victories this season.

The WBCA Victory Club honor is bestowed annually on each WBCA-member head coach who achieves a milestone of 200, 300, 400, 500 or more career victories during the current season on the level of competition at which they currently coach. Victories recorded at differing levels of competition (such as scholastic and collegiate) cannot be combined.

This year, Carey guided the Mountaineers back to the NCAA women’s basketball tournament for the first time since 2016-17. It marked WVU’s 11th trip to the Big Dance and 15th postseason appearance under Carey. West Virginia also reached the Big 12 Championship title game this season for the first time since the 2016-17 season and the third time since joining the league in 2012-13.

The winningest coach in program history, the 2020-21 campaign marked Carey’s 20th season coaching the Mountaineers. He holds a record of 432-223 at WVU. During the 2020-21 campaign, Carey led West Virginia to 22 wins, the most since the 2018-19 season, and now has won 20 or more games 13 times during his time in Morgantown. He also guided WVU to 13 victories within the Big 12 Conference for the first time since 2013-14, when the Mountaineers won 16 league games.

Carey also led West Virginia to a win over then-No. 17 Texas on Jan. 9, and Tennessee, who finished the regular season at No. 14 in the Associated Press Top-25 Poll.

On March 3, Carey was named one of 10 semifinalists for the 2021 Werner Ladder Naismith Women’s Coach of the Year award and was the only coach from the Big 12 Conference to be honored on the list. Earlier in the season, he also was selected to the award’s watch list.

The West Virginia men’s soccer team begins a three-game road trip with a match at No. 21 Akron on Wednesday in Akron, Ohio. Kickoff from Cub Cadet Field at FirstEnergy Stadium is set for 7 p.m.

“Akron is always a team that likes to keep possession and play an expansive style, which won’t be too dissimilar to part of the test we had against Marshall,” first-year coach Dan Stratford said. “I’ve seen a good bit of them over the last eight years, between my time as an assistant when we first joined the MAC and actually played them a couple of times when I was with Charleston. I know (head coach) Jared (Embick) and the staff fairly well, and I’m familiar with the successes and the tradition they have at Akron, so we’re expecting a quality contest against a quality team.”

Since joining the MAC in 2012, West Virginia has only beaten Akron twice, with its last win over the Zips coming in an overtime thriller in Akron in 2018.

Akron is led by eighth-year head coach Embick, who has put together a 103-42-16 overall record with the Zips since his hiring in 2012. Embick led the squad to its 20th regular season MAC title in 2019, while also garnering 2019 MAC Coach of the Year honors.

Temple and Diogo Pacheco pace the squad with a pair of goals and four points on the year, while six different Zips have scored this season. Pacheco also has registered 12 shots, placing six of them on goal, through six games this year to sit second in the MAC in shots per game (2.40). Will Meyer leads the Zips in goal this season, recording 10 saves and one shutout on the year.

A Look at all the overdrive moves in Guilty Gear Strive

How to Save on Taxes Without Real Estate Professional Status