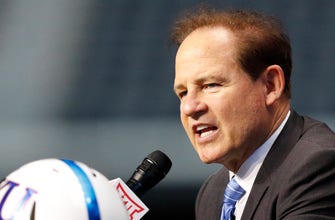 LAWRENCE, Kan. — Les Koenning must be careful every time the new offensive coordinator at Kansas walks into one of the Jayhawks‘ meeting rooms, making sure to address the right person by the right name. And it has nothing to do with learning dozens of unfamiliar faces.

Sitting front-and-center with the quarterbacks are sophomore Miles Kendrick and freshman Miles Fallin, both of whom are competing for a backup job. Beside them is senior transfer Manny Miles, and a couple rows back is fullback Ben Miles, the sons of new Jayhawks coach Les Miles.

Koenning might almost expect Atlanta Hawks forward Miles Plumlee, or perhaps the ghost of the great jazz musician Miles Davis, to come walking through the door next. He can’t see for all the Mileses.

“It definitely can get confusing,” Koenning said with a laugh. “You have to be careful not to say, ‘Hey, Miles!’ or you have half a dozen people turning their heads.”

Perhaps the oddity of miles and miles of Mileses at Kansas isn’t quite so odd, though.

According to the Social Security Administration, which tracks baby names going back decades, the name has actually become fairly popular in recent years. The name cracked the top 100 for boys for the first time last year. It came in at No. 98, just behind Parker and Kayden but just ahead of Sawyer and Jason.

By the way, the name Leslie — as in, Les Miles — didn’t even register on the list.

The name is not exactly rare for football players, either. Wide receiver Miles Austin was a two-time Pro Bowl selection who played 10 seasons in the NFL for the Cowboys, Browns and Eagles. Running back Miles Sanders was a second-round pick of the Eagles and wide receiver Miles Boykin a third-round pick of the Ravens, and both are expected to contribute heavily during their rookie seasons.

Maybe those guys in the Kansas meeting room are just playing the wrong position.

That’s just the first measure of the Miles name, too. Now consider the surname: There is Trent Miles, the current football coach at Georgia State. Joshua Miles, who went from Morgan State to playing offensive tackle for the Cardinals. Eddie Miles had a stint with the Steelers in the 1990s, and Ostell Miles spent a couple of years running the ball for the Bengals.

Or how about Aaron Miles, who starred for the Jayhawks just across campus in Allen Fieldhouse.

When asked to assess the race to be their starting quarterback for next Saturday’s opener against Indiana State, Miles — that would be Les — said: “I made it very clear very quickly that there would be no chance if you weren’t 6-foot-3 and above, or if your last name or first name or any name was Miles you would have a better chance than if you didn’t have a Miles associated with your name.”

That’s because the front-runners, James MacVittie and Carter Stanley, are tall, strapping veterans who have a lock on the top two spots on the depth chart. But down the list?

Manny Miles transferred from North Carolina as a graduate student so that he could play his final season for his dad. Ben Miles joined his brother after stops at Nebraska and Texas A&M. Miles Fallin and Miles Kendrick were recruited to Kansas by the previous coaching staff.

“It’s kind of funny when you walk into a room,” Manny Miles said. “You can’t help but laugh.”

When Koenning walks into a meeting in the Anderson Family Football Complex, he sees Miles here, Miles there and Miles everywhere. And should Koenning turn on a hype video made by the school this spring, he might see Les Miles getting interviewed inside the Jayhawks’ glittering new indoor practice facility. Asking the questions?