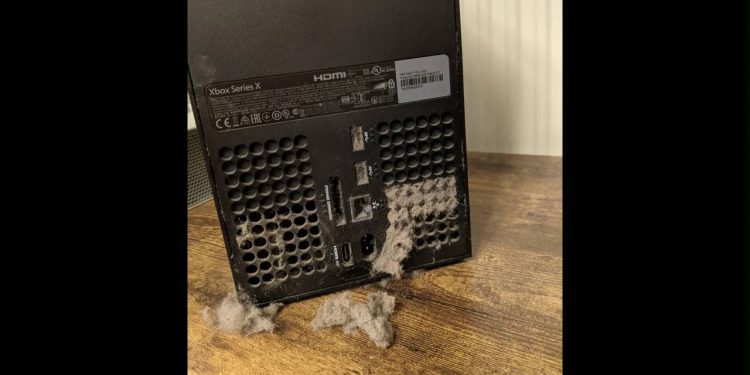 
When was the last time you checked the back of your Xbox Series X? Last month? Never? Well, it might be worth having a peek to see what’s going on behind the scenes.

As Reddit (opens in new tab) user u/Tea-Mental shared in r/XboxSeriesX, you might want to check the back of your Xbox once in a while. Their picture showed a very dusty Xbox Series X, with many of the console’s air vents blocked as a result. This can, of course, cause the console to overheat and negatively impact performance as a result. Worst-case scenario, an accumulation of dust could lead your Xbox Series X to malfunction. And no one wants that.

The dust-laden picture led to a wider discussion about the best console cleaning techniques on Reddit. Some replies suggest investing in an air purifier to combat dust build-up, making sure to change the filters on a monthly basis. Others advised regularly dusting your wider home, particularly if you have pets. Some product recommendations (opens in new tab) were also suggested but, whatever you do, please don’t use a vacuum to clean your console.

Dust accumulation is an incredibly common problem, both with consoles, PC hardware, and other electronics, but sticking a powerful suction nozzle over an air vent will likely result in some internal damage. It’s best to use compressed air if you really want to clear out all the nooks and crannies.

So, want to clean your Xbox? If you’re unsure where to begin, Microsoft has previously issued official guidance (opens in new tab) for console and controller cleaning.

For general upkeep, Microsoft recommends using premoistened disinfectant wipes or a microfiber cloth, one that’s “dampened with a little bit of mild soap and water” every three to six months. We hope it goes without saying, but make sure your console’s disconnected from the power source before you do any cleaning.

As for your console and headset specifically, Microsoft advises using an “isopropyl alcohol (IPA) solution.” For your controllers, an IPA solution, disinfectant wipes, or general all-purpose cleaners are suggested and the full list (opens in new tab) can be found here. Be warned, though: this cleaning advice is universal for Xbox Series X and Xbox One consoles, but differs between official headsets and controllers.

That’s a lot to bear in mind, then, but keeping your hardware clean will ultimately increase its longevity and avoid you having to fork out for a replacement. We’re all guilty of neglecting to clean our hardware at times. Life gets busy, other matters take priority, and once you’ve arranged your home entertainment setup, taking that apart can be annoying. Nevertheless, a quick spring clean can make all the difference to the lifespan of your console.