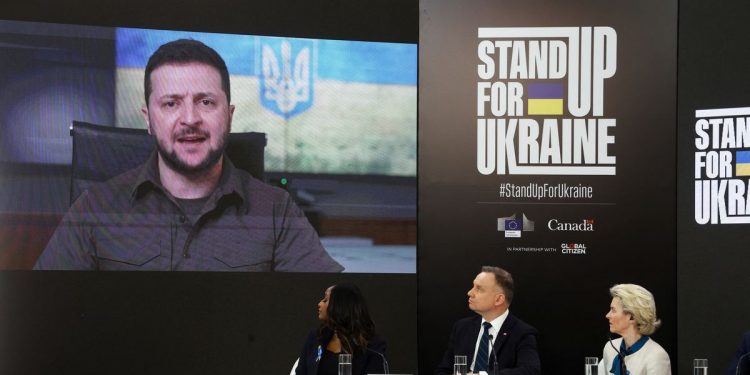 April 18 (Reuters) – Ukrainian President Volodymyr Zelenskiy formally submitted a completed questionnaire on European Union membership to an envoy on Monday and said he believed this step would lead to his country gaining candidate status within weeks.

European Commission President Ursula von der Leyen handed the questionnaire to Zelenskiy during a visit to Kyiv on April 8, pledging a speedier start to Ukraine’s bid to become a member of the EU following Russia’s invasion of the country. read more

Zelenskiy submitted the completed document to the EU’s envoy to Ukraine, footage released by his government of the meeting showed.

“We strongly believe that this procedure (granting of candidate status) will take place in the coming weeks and that it will be positive for the history of our people, given the price they paid on the path to independence and democracy,” the Ukrainian leader said during the meeting.

The deputy head of Zelenskiy’s office said earlier on Monday that he expected Ukraine would be granted candidate status in June during a scheduled meeting of the European Council, which comprises leaders of EU member states.

The European Commission, the EU executive body, will need to issue a recommendation on Ukraine’s compliance with the necessary membership criteria, he added.

As a candidate country, Ukraine would start negotiations on aligning its laws with the legal framework of the European Union. See FACTBOX: read more