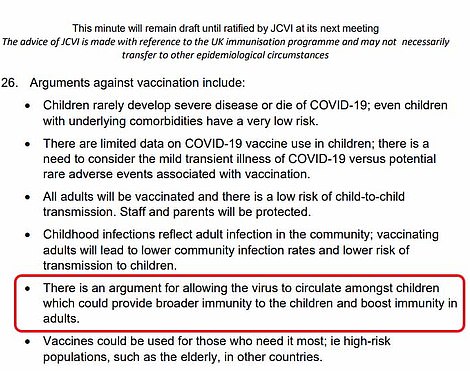 Newly-published minutes from JCVI meetings show that the group first looked at whether letting 12 to 15-year-olds catch Covid naturally was better than vaccinating them on May 13 (shown above). It looked at a range of reasons against vaccinating people in the age group, which included the argument that natural infection might be better and less risky

‘Zero Covid’ scientists have slammed the Government’s coronavirus vaccine advisory panel as being ‘anti-vax’ for considering the benefits of herd immunity over vaccination in children.

Members of Independent Sage, a vocal group of experts who have clung on to the idea of eliminating Covid, accused the Joint Committee on Vaccination and Immunisation of using youngsters as ‘human shields’ to protect adults.

Newly-published minutes from JCVI meetings show that the group first looked at whether letting 12 to 15-year-olds get Covid naturally was better than vaccinating them in spring, months before the rollout was expanded to teens.

Echoing the view of many independent experts, the JCVI accepted allowing the virus to circulate naturally could give youngsters strong immunity and also protect adults — without the risk of side effects from vaccines.

The panel emphasised Covid posed such a tiny threat to children and raised concerns about a heart inflammation condition associated with the jabs in young people.

‘Children rarely develop severe disease or die of Covid; even children with underlying comorbidities have a very low risk,’ the JCVI said in its 32nd meeting on May 13.

‘There are limited data on Covid vaccine use in children; there is a need to consider the mild transient illness of Covid versus potential rare adverse events associated with vaccination.

‘There is an argument for allowing the virus to circulate amongst children which could provide broader immunity to the children and boost immunity in adults.’

The group also considered that children might be better off catching Covid at a young age, when they are at low risk, so that they are less vulnerable in adulthood, as is the case with chicken pox and other viral infections.

Dr Kit Yates, a mathematical biologist at the University of Bath and Independent Sage member, quoted excerpts from a number of JCVI minutes in a lengthy Twitter thread, writing: ‘Anti-vax or JCVI?’

His colleague Professor Alice Roberts, a public health expert at the University of Birmingham, said the views expressed at the meetings were ‘just appalling’. Other Independent Sage members described them as ‘upsetting’. 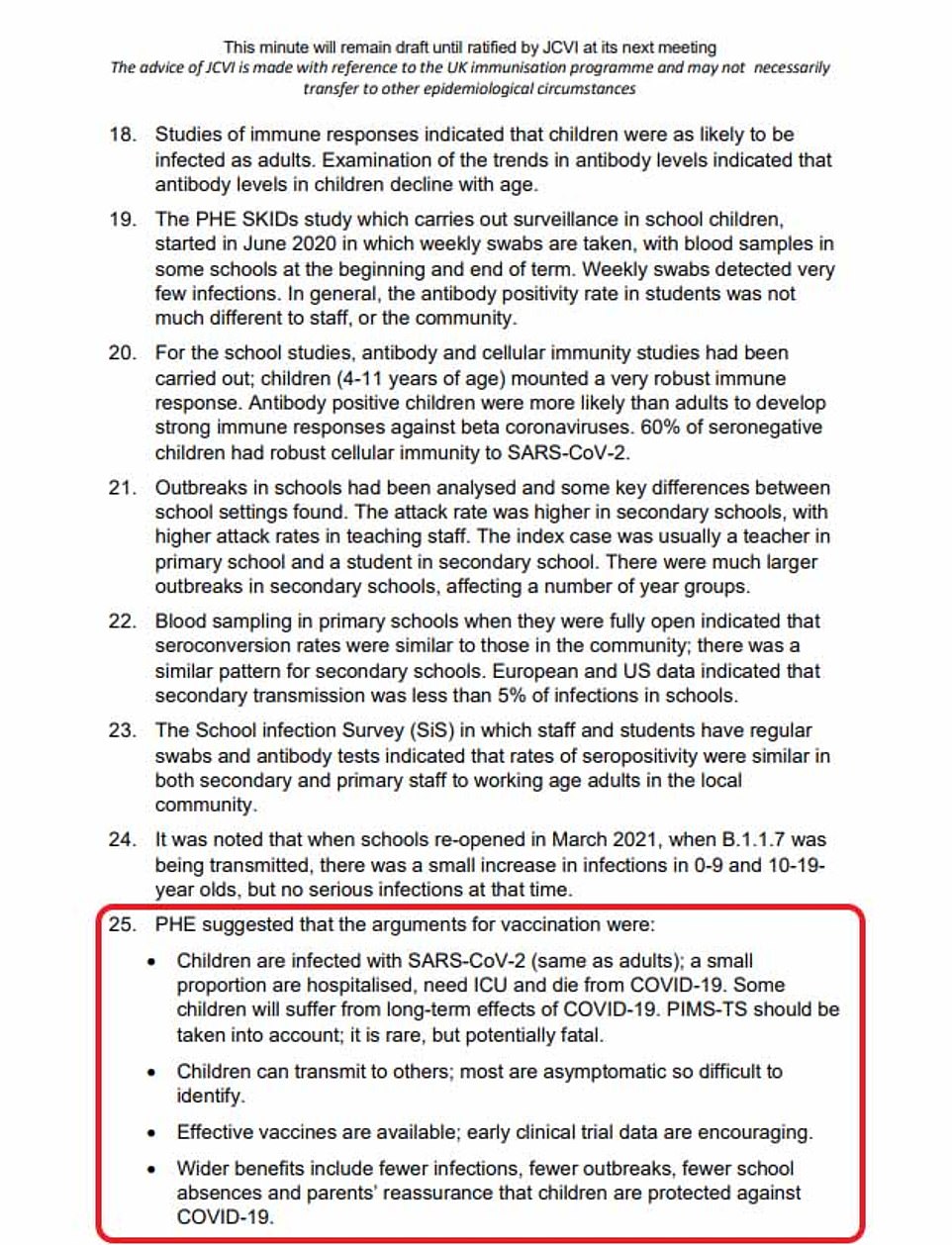 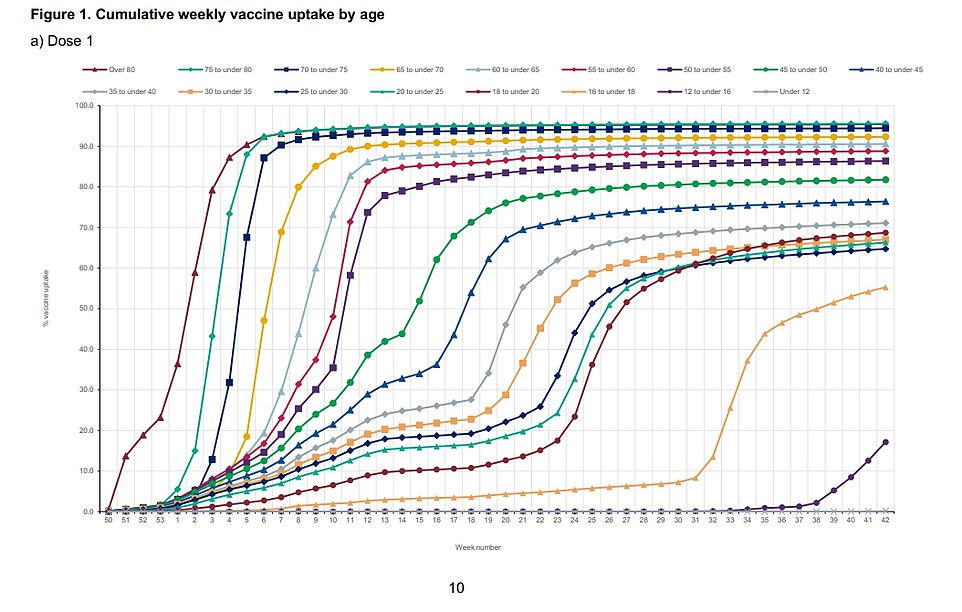 Only around 20 per cent of 12 to 15-year-olds in England have been vaccinated against Covid so far (purple), which is believed to be due to hesitation among parents

But Professor Robert Dingwall, a former JCVI member who participated in the discussions, told MailOnline today that it was ‘absurd’ to describe the panel as anti-vax.

‘But they are sensitive to risks, and they recognise all vaccines come with small risks. So the default position is we don’t want to give to anyone any vaccine until we’ve weighed up all the risks and benefits.

‘The JCVI has been keeping the nation safe for 60 years by applying that same reasoning with all vaccines.’

The JCVI is made up of 20 top virologists, epidemiologists, public health experts and behavioural scientists, including Oxford University’s Sir Andrew Pollard, who helped develop the AstraZeneca jab.

Arguments to vaccinate children as young as five against Covid are ‘scientifically weak’, British experts told MailOnline after the US moved closer to jabbing infants.

American health chiefs are expected to green light the plans within days, which will put pressure on the UK to follow suit.

But British scientists have warned against ‘blindly’ recommending the jabs to primary school-aged children without weighing up the risks ‘extremely carefully’.

Professor David Livermore, a medical microbiologist at the University of East Anglia told MailOnline: ‘Vaccinating children to protect adults via herd immunity is ethically dubious and is scientifically weak.’

There are also still fears about myocarditis, a form of heart inflammation detected in children, mostly boys, in around one in 10,000 cases after vaccination.

Critics say children are better off catching Covid and getting protection naturally because the risk of being admitted to ICU is about one in 500,000.

There are signs that natural immunity in British youngsters is already slowing the epidemic. But some studies have suggested myocarditis is even more common after Covid infection itself, which complicates the matter further.

Professor Russell Viner, a pediatrician and member of the UK Government’s scientific advisory group SAGE, said it was crucial the UK does not ‘rush to a decision’ in the wake of the announcement in the US.

The group has not shied away from making difficult decisions that put the UK at odds with other countries, including going with a different dosing strategy.

When the vaccines were first rolled out in winter, the group stretched the recommended three-week regimen to 12 weeks to get wider coverage and because there were signs the jabs might work better that way.

At the time, the JCVI was heavily criticised, with the British Medical Association warning at the time that the JCVI’s decisions were ‘proving evermore difficult to justify’.

‘The absence of any international support for the UK’s approach is a cause of deep concern and risks undermining public and the profession’s trust in the vaccination programme,’ the union said.

Professor Dingwall, a sociologist at Nottingham Trent University, explained that the JCVI weighed up a range of different viewpoints in the spring and summer which never factored into its final decision.

He told MailOnline: ‘The meetings in spring and summer were deliberately intended to be wide-ranging discussions without coming to conclusions.

‘The committee considered a great range of evidence and possible interpretations of that evidence, and that’s how you get to a consensus in these types of committees.

‘You look at everything out there and come to a conclusion, some on Independent Sage are making out that just because things appear in early discussions mean they were factored into the consensus.’

He added: ‘If you are a zero-infection absolutist, the vaccine should have been approved quickly. If this had been done, some children would have suffered serious consequences from heart inflammation and we would be discussing those. In the end there was not a clear signal either way.’

Minutes from the same meeting on May 13 show that the JCVI considered that rolling out jabs to under-16s could result in ‘fewer infections, fewer outbreaks, fewer school absences’.

In a subsequent meeting on May 20, the group said that vaccinating children could also ‘have some impact on mortality in older adults’.

The JCVI ultimately decided against recommending Covid vaccines for healthy 12 to 15-year-olds in September despite huge political and public pressure because the risk of side effects did not clearly outweigh the threat of Covid.

It urged ministers to seek advice from other public health experts about the wider benefits of vaccinating children to society.

The group had already approved plans for children in that age group with serious underlying conditions to be jabbed and for youngsters who lived with extremely vulnerable family members. It said that, in these groups, the benefit did outweigh the risk. 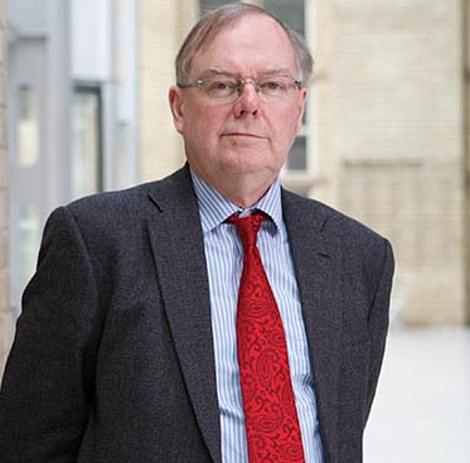 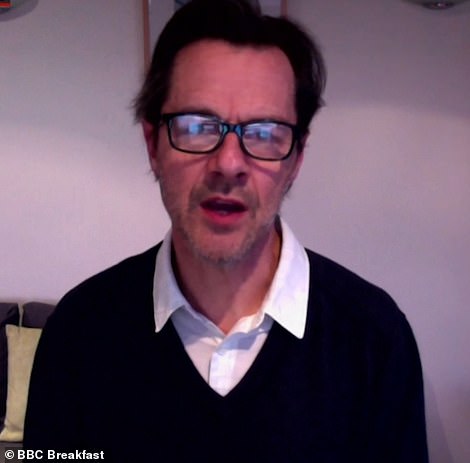 Professor Robert Dingwall, a former JCVI member who participated in the discussions, told MailOnline today that it was ‘absurd’ to label the JCVI as anti-vax. JCVI member Professor Adam Finn has admitted he has sympathy with parents who are cautious to get their children vaccinated

All NHS-run Covid testing sites will shut EARLY from today

NHS-run Covid testing sites are to close from 6pm as of today after officials claimed not enough people were coming forward for swabs in the evening.

The £37billion Test and Trace scheme has instructed all local and regional facilities in England to scale back their opening hours and shut early.

Bosses at the new health agency responsible for the programme claimed the decision was taken because ‘demand for tests reduces significantly’ at night.

But MPs said working Britons found evening tests convenient, while a SAGE expert questioned the timing of the move, with cases high heading into winter.

Most NHS walk-in and drive-through sites were open from 8am to 8pm every day, for people with symptoms or close contacts of a confirmed case.

There are around 500 NHS testing sites across the whole of the UK.

The scale-down comes after a Commons inquiry found Test and Trace had been an ‘eyewatering’ waste of public cash that failed in all of its main objectives.

But the JCVI raised concerns about myocarditis, a form of heart inflammation detected in healthy children, mostly boys, in around one in 10,000 cases after vaccination.

For comparison, the group said the risk of a healthy under-16 being admitted to ICU with Covid was about one in 500,000.

While most cases of myocarditis are mild and treatable, JCVI member Professor Adam Finn admitted that the long-term effects of the condition are not yet known.

He urged parents who were cautious about getting their child vaccinated to wait six months for more safety data to come through.

Professor Dingwall told MailOnline: ‘There is a general concern that with side effects like myocarditis, what we’re seeing is inflammation to the heart tissue, so there could be risk to other tissue. It can take some time for the extent of this damage to reveal itself.’

But some studies have suggested myocarditis is more prevalent after Covid infection itself, which complicates the matter further.

Data used to justify the JCVI’s decision showed that there were 259 Covid admissions to ICU among under-18s in England up to the end of February 2021, and 22 had no underlying health conditions.

Six of the 25 children who died from the virus in the same time also did not appear to have comorbidities.

Weeks after the JCVI’s decision, Professor Chris Whitty and his fellow chief medical officers green-lit the rollout in children after finding that it could keep schools open and prevent further disruptions.

Only around 20 per cent of 12 to 15-year-olds in England have been vaccinated against Covid so far, which is believed to be due to hesitation among parents.

One mother told MailOnline she did not feel comfortable getting her teenage son jabbed against the coronavirus because the recommendation was not given by the JCVI, which is independent of Government.

There are signs that natural immunity in British youngsters is already slowing the epidemic following a surge that started at the beginning of the new term.

Professor Dingwall, speaking in a personal capacity after stepping down from the JCVI in August, said that, fundamentally, the expert panel was opposed to over-medicating.

He told MailOnline: ‘There is a cultural divide at the basis of this and it’s something which has roots in America. Some think that if there’s any way to avoid an infection you should avoid it, by means of vaccination or drugs.

‘Ten years ago, the JCVI looked at vaccinating children against chicken pox and came to the conclusion it was not worth it.

‘And we’re trying very hard in the area of antibiotics not to promote the notion of ‘just because you’ve got an infection you should have a pill for it.”

Zillow seeks to sell 7,000 homes for $2.8 billion after pausing its flipping purchases

Zillow seeks to sell 7,000 homes for $2.8 billion after pausing its flipping purchases