Arx Fatalis, the 2003 RPG banger, is so good it should have absolutely destroyed Elder Scrolls 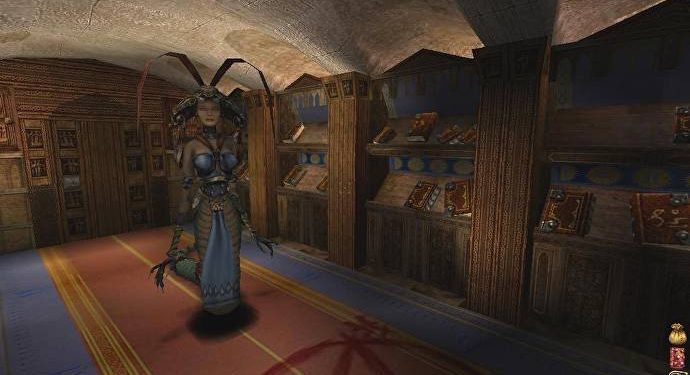 
A decade before Arkane Studios would create the silky-smooth stealth sandbox Dishonored, it released its debut – an altogether dirtier breed of first person action-RPG called Arx Fatalis. Unfortunately, the developer released it just a few months after something called Morrowind. Both games are stuffed with the sorts of things a particular breed of computer anorak gets sweaty over: pantheons of bickering deities, weapon durability, fiddly controls, obtuse levelling systems conceived by an absolute lunatic, mushrooms. Where the games differ is in just how little Arx Fatalis is interested in making the player feel powerful.

The Elder Scrolls are absolute power fantasies, built entirely around freedom and letting the player act out their LARP-ing dreams without going outside. Sure, the player usually starts in chains, but within 10 minutes they’re roaming the fantastical countryside and pissing fireballs out of every orifice. In Arx Fatalis, the chains never really come off. There’s no post-tutorial catharsis, no sense of wonder as you exit the starting area and gaze at the possibilities stretching out to the horizon. That Big Moment – that thrill of your eyes adjusting to the light as you leave Vault 101 or as Link wakes up from his 100-year nap? In Arx Fatalis, it never comes. Because Arx Fatalis is set in a cave.

All of Arx Fatalis is set in a cave. You never leave the cave. When you escape from one cave, you simply arrive in a different cave. The world of Arx has lost its sun, and every archetypal fantasy race has been forced to share the dank deep underground. You spend the opening hours desperately flailing at rats with a bone you’ve scavenged from a pile. You rip the meat from the rats, warm it by the fire and feast on it while you’re hunched over in your pants. When you finally manage to drag yourself to the human city, you’ll be shocked to discover that it’s just another cave. It’s caves all the way down. But what caves they are.

It’s hard to think of a braver pitch than an RPG that’s set entirely in caves. Say the words “RPG” and “cave” and what do you feel? Do you think about the hours of identikit misery spent in the grey tunnels of Oblivion? Are you thinking about having to visit the exact same cave with slightly different wallpaper 10000 times in Dragon Age 2? Caves are frequently the lowest points of videogames – where creativity goes to die. They’re not conducive to a sense of freedom, to the articulation of player power. They’re there for fodder, as easily churned out parcels of Content where the player can find incrementally superior pantaloons over the course of 500 hours. When was the last time you visited a cave with personality? Each cave in Arx Fatalis is a little work of art – conveying such a horrid, damp atmosphere and presence that if you play for more than an hour you’ll feel the need to put the heating on.

The sense of physicality that would truly shine in Arkane’s next release – Dark Messiah of Might & Magic – is present in Arx too. Cooking something means literally dragging it out of your satchel and placing it on the filthy ground next to a fire. Meat darkens and dough rises. Rocks can be picked up and flung across the room to distract enemies. You can decorate a room with ferns and flowers or create a pile of skulls at someone’s front door. When a cult leaves a beheaded chicken on your bed, you can carry it at arm’s length and hurl it into the hallway, making it someone else’s problem.

This tactile method of interaction also extends to the magic system. Casting a spell involves absent-mindedly spelling out combinations of arcane runes in front of your face. In real time, typically while a lich is blasting you with electricity. From memory, ideally – though few of the spells make any sort of mnemonic sense, so you’re frequently going to be referring to your spellbook in the middle of a battle.

You feel less like an all-powerful wizard and more like a kid’s party magician fighting for his life to marshal ancient knowledge that’s completely beyond his grasp. A system that allows you to pre-bank three spells feels like the sort of cop-out that wouldn’t have happened if ‘Arx Fatalis’ had been released in today’s market, where there’s a more mainstream interest in games that are actively antagonistic towards the player. In Elder Scrolls, magic is Fun, usually allowing the player to break the world in incredible ways: clearing buildings in a single bound, running around at 100mph. In Arx Fatalis, the most exciting feat of wizardry is being able to slowly hover half a metre off the ground.

Arx Fatalis is a whopping $4.99/£2.99 on Steam and can be easily modded to look razor sharp on modern displays. There’s been a lot of work to make the spell inputs more reliable and if you really want to get carried away, you could download 4.5GB of AI upscaled textures. I’ve no idea how that works. I think they force a robot to think very hard about rocks. The point is, Arx Fatalis is the third prong of an RPGs Set in Caves Holy Trinity, supported by Avernum and Breath of Fire V Dragon Quarter. Just tell me that doesn’t excite you.

I don’t know anything about The Elder Scrolls 6, but I feel safe assuming that it will be huge. That it will have the slickest, most satisfying combat yet. Bethesda will continue chipping away at those lingering nuggets of friction and discomfort, making sure there’s even less standing in the way between the player and their desire to feel like Billy Big Baws.

But haven’t you had enough of feeling powerful? Don’t you want to have a miserable time in a big cave for a few hours? It builds character. Skyrim will still be there, on every possible platform going, when you need it. So try out Arx Fatalis, if you haven’t already, and let it show you how good a bad time can really feel.