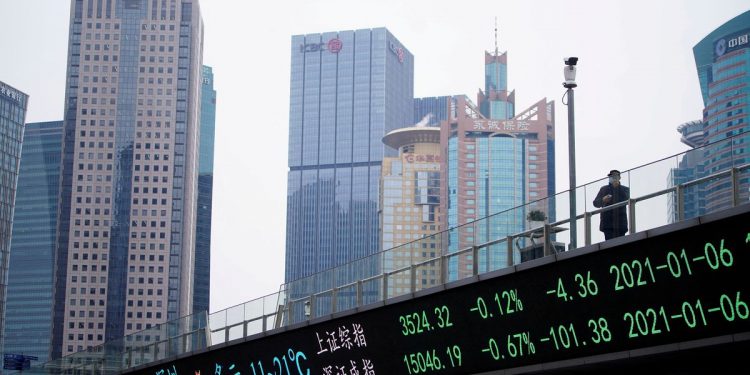 Traders are seen in front of a screen with trading figures in red at Thailand Stock Exchange building in Bangkok, Thailand March 13, 2020. REUTERS/Juarawee Kittisilpa/Files

“The data paint a picture of a stalling economy and one in need of more aggressive stimulus and a rapid easing of COVID restrictions, neither of which are likely to be forthcoming anytime soon,” said Mitul Kotecha, head of emerging markets strategy at TD Securities.

“China’s weaker growth trajectory will add to pressure on its markets and fuel a further worsening in global economic prospects, weighing on risk assets. We expect further CNY depreciation.”

In Europe, EUROSTOXX 50 and FTSE futures both eased 0.3%. S&P 500 stock futures lost early gains to drop 0.6%, while Nasdaq futures fell 0.5%. Both are far from last year’s highs, with the S&P having fallen for six straight weeks.

China’s central bank had also disappointed those hoping for a rate easing, though on Sunday Beijing did allow a further cut in mortgage loan interest rates for some home buyers. read more

Chinese blue chips (.CSI300) shed 0.8% in reaction, while commodity currencies took a knock led by the Australian dollar which is often used as a liquid proxy for the yuan.

Sky-high inflation and rising interest rates drove U.S. consumer confidence sink to an 11-year low in early May and raised the stakes for April retail sales due on Tuesday. read more

A hyper-hawkish Federal Reserve has driven a sharp tightening in financial conditions, which led Goldman Sachs to cut its 2022 GDP growth forecast to 2.4%, from 2.6%. Growth in 2023 is now seen at 1.6% on an annual basis, down from 2.2%.

“Our financial conditions index has tightened by over 100 basis points, which should create a drag on GDP growth of about 1pp,” said Goldman Sachs economist Jan Hatzius.

“We expect that the recent tightening in financial conditions will persist, in part because we think the Fed will deliver on what is priced.”

Fears that the tightening will lead to recession spurred a rally in bonds last week, which saw 10-year yields drop 21 basis points from peaks of 3.20%. Early Monday, yields were easing again to reach 2.91%.

The pullback saw the dollar come off a two-decade top, though not by much. The dollar index was last at 104.560, and within spitting distance of the 105.010 peak.

In cryptocurrencies, Bitcoin was last up 2% at $30,354, having touched its lowest since December 2020 last week following the collapse of TerraUSD, a so-called stablecoin.

In commodity markets, gold was pressured by high yields and a strong dollar and was last at $1,809 an ounce having shed 3.8% last week.

Switzerland votes for organ donation by default - The Guardian