Average home-owning pensioner fails to claim nearly £1,200 in benefits that they are eligible for

Pensioners who own their homes could be missing out on thousands of pounds of income by failing to claim their full state benefit entitlement.

Nearly half of eligible homeowners are not claiming any benefits at all, with each household missing out on an average of £1,197 extra income a year.

This was according to an annual report by Just Group, a specialist in retirement products and services, and was based on interviews with over-55s seeking advice on equity release products in 2021.

Furthermore, it found that more than two in 10 pensioner homeowners who were claiming benfits were receiving too little, missing out on £1,220 a year on average. 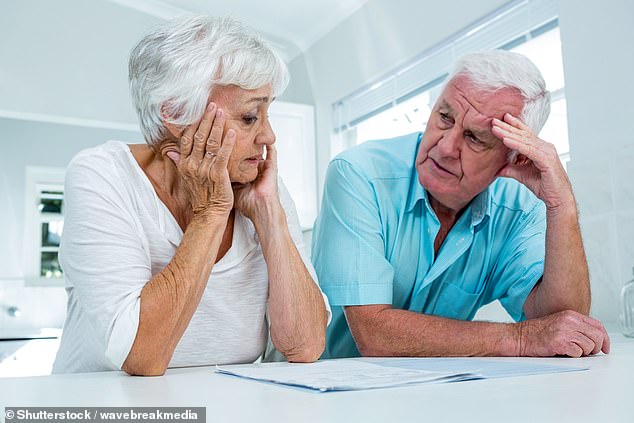 Missing out: The report by Just Group found that about one-third of those who were under-claiming state benefits were entitled to payments totalling at least £1,000 a year

The worst case discovered by the report was a couple in Kent who were losing out on £9,090 a year.

Although the couple were receiving some disability and mobility benefits, it was discovered they could also be claiming Guarantee Pension Credit, Savings Pension Credit and Council Tax Reduction.

Some benefits, such as the state pension, are open to all, but others such as pensions credit are means-tested. The age of eligibility can also vary for certain benefits.

Stephen Lowe, group communications director at retirement specialist Just Group said: ‘Every year we find meaningful income that would make a real difference to people’s lives is not being claimed.

‘The proportion eligible for a benefit is trending lower, but more of those people are failing to claim.

‘It raises serious questions about why people in most need of support are not receiving what is rightly theirs.’

Benefit entitlement survey: The research was based on in-depth fact-finding interviews with clients seeking advice on equity release mortgages during 2021

Just Group’s research, which involved in-depth interviews with people seeking advice on equity release during 2021, found that nearly one in four were entitled to benefits.

In total, about one-third of those who were under-claiming were entitled to benefits worth at least £1,000 a year.

Guarantee Pension Credit has the highest take-up rate of all the four key benefits with seven in 10 who are eligible claiming, according to Just Group.

This is the main benefit targeted at helping low-income pensioners. It gives them extra money to help with living costs if they’re over state pension age and on a low income.

It can also help with housing costs such as ground rent or service charges, or for covering the costs of a carer, for example.

Those failing to claim are missing out on an average of £2,265 extra income per year, according to Just Group: the most of all the benefits.

Savings Pension Credit gives extra money to those who have made some provision towards their retirement through their own savings, or via a pension other than the basic state pension.

However, it is only available to people who reached state pension age before 6 April 2016.

It has the lowest take-up rate of any pensioner benefit, according to Just Group, with just 45 per cent of those who are eligible claiming it. Those failing to claim are missing out on £596 a year.

Council Tax Reduction is claimed by less than half of those who are entitled to it, with the average non-claimant missing out on £748 a year.

‘Our insight broadly reflects government figures which show that take-up of Guarantee Pension Credit is 70 per cent and Savings Credit 42 per cent overall,’ adds Stephen Lowe.

‘For the two elements of Pension Credit, the government estimates up to a million households are failing to claim up to £1.8 billion or around £1,700 each .

How to check if you are missing out on benefits

Just Group is calling for information about benefits to be at the heart of all retirement guidance.

It is advising all pensioners to check whether they may be entitled to some, or more, benefits than they are currently receiving.

There are a range of resources available to support people in claiming their full benefit entitlement and to provide additional guidance, including organisations such as Money Advice Service and charities such as Age UK and Citizens Advice.

The government also highlights free, independent third-party benefit calculators to help pensioners find out what benefits they could be entitled to and how to claim.

You can also work out how much you might need to save towards your retirement using the This is Money pension calculator.

Lowe believes the findings raise questions about the support and guidance available to those struggling for income, particularly among homeowners.

‘It reinforces the message that benefits information is integral to retirement guidance and that those struggling for income should check if they are missing out which many fail to do.

‘Our research last year found that 44 per cent of homeowners aged over-65 had never checked their entitlement to state benefits compared to just 16 per cent who are renting.’