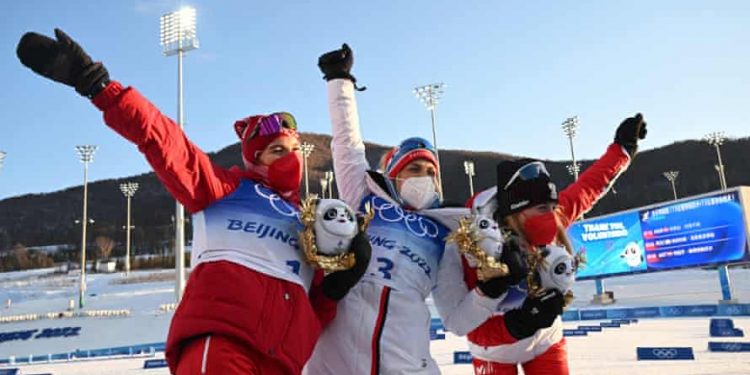 
Any hope of the controversies that have dogged the Beijing Winter Games fading into a feelgood blur of medals once the torch was lit was quickly swept aside on Saturday as the first gold of these Olympics went to a convicted doper.

Therese Johaug, the decorated Norwegian cross-country skier who was barred from competing at the 2018 Pyeongchang Winter Olympics while serving an 18-month suspension for a positive drugs test she blamed on tainted lip balm, obliterated the field to win the 7.5km+7.5km skiathlon on a windblown afternoon in the tiny village of Taizicheng in the mountains roughly 120km northwest of Beijing.

Few if any of the 109 gold medals that will be handed out across 15 different sports over the next two and a half weeks will be won in more dominant fashion. The 33-year-old Johaug, who tucked herself into the leading pack from the mass start before opening a lead of nearly a minute on a chase group of four during the final lap, raised her arms in jubilation as she crossed the line in a time of 44min 13.7sec to win the 15km contest regarded as cross-country’s ultimate test.

Natalia Nepryaeva, the Russian perched atop the overall World Cup leaderboard, rallied to overtake a pair of skiers in the final kilometre to win the silver, coming in 30.2sec off the pace. Austria’s Teresa Stadlober settled for bronze after she was pipped by 0.3sec at the finish by Nepryaeva. Kerttu Niskanen of Finland finished fourth and Frida Karlsson of Sweden was fifth, eight seconds ahead of sixth-place Jessie Diggins, who became the first American to win a gold medal in cross-country in the team sprint at Pyeongchang.

The skiathlon race is designed to determine the best all-around skier. That mantle belongs to Johaug after her runaway victory, which played out in punishing conditions of icy gusts and -1C (30F) temperatures, but not without the spectre of controversy. For Johaug, it was her fourth career Olympic medal and second gold after helping Norway to a 4×5km relay win at the 2010 Vancouver Games. The 14-times world champion also won a silver and bronze in team events at Sochi four years later.

But the Norwegian was forced out of the 2018 Olympics due a lengthy suspension after testing positive for the anabolic steroid clostebol, which she claimed was the result of a lip ointment purchased by team doctor Fredrik Bendiksen on short notice to treat sunburn during high-altitude training in Italy.

Her explanation was deemed implausible by skiing’s international governing body – not least because the cream in question included a doping warning label on the box – which appealed the 13-month suspension initially handed down by Norwegian anti-doping authorities. The court of arbitration forsport subsequently tacked on five months to the punishment, acknowledging Johaug’s “otherwise clean anti-doping record” but citing her negligence in missing a clear warning label and ruling one of the sport’s biggest stars out of Pyeongchang.

“Johaug failed to conduct a basic check of the packaging, which not only listed a prohibited substance as an ingredient but also included a clear doping cautionary warning,” the court said in a press release. Bendiksen went on to resign his post after taking the blame for Johaug’s positive test.

Since returning from her suspension, Johaug has finished off the podium just once in 53 races. She is widely expected to add to her medal haul in the coming days as the women’s cross-country programme moves forward.

“It means a lot,” Johaug said in the immediate aftermath. “I’ve never had an [individual] Olympic gold medal, it’s my first one. I’m so happy.”

She added: “At first I was really happy just to come here because we have the Covid in our team. And today when I’m reaching my goal, I’m so happy. I’ve trained thousands of hours for this and been away from home a lot over the years. So it’s beautiful to reach this goal.”

Johaug’s win came shortly before speed skater Irene Schouten of the Netherlands won the second gold of the Beijing Games in the women’s 3000m.

The Game Awards Game Of The Year Winner, It Takes Two, Has Sold 5 Million Copies

The Game Awards Game Of The Year Winner, It Takes Two, Has Sold 5 Million Copies