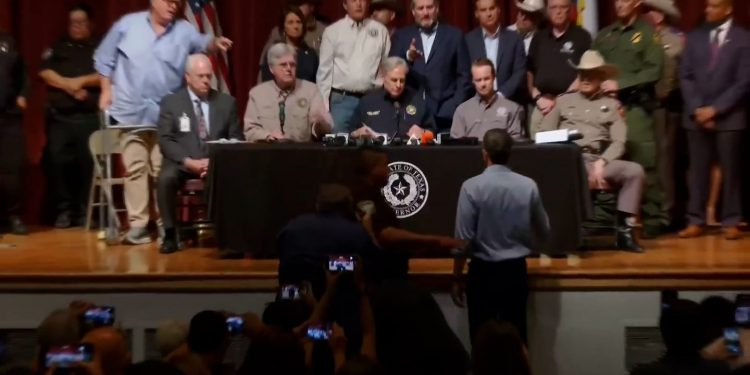 O’Rourke, a former Texas congressman, approached the stage as Abbott was introducing Texas Lt. Gov. Dan Patrick (R), telling the officials assembled that it was long past time to act to prevent mass shootings like the one at Robb Elementary School, where 19 children and two teachers were killed Tuesday.

Speaking over the objections of Patrick, O’Rourke said Abbott should have taken action after other high-profile mass shootings in Texas, such as at Santa Fe High School in 2018 and at an El Paso Walmart in 2019.

“The time to stop the next shooting is right now, and you are doing nothing,” O’Rourke said. “You’re offering us nothing.”

Patrick yelled back at O’Rourke, saying he was “out of line” and “an embarrassment.” Sen. Ted Cruz (R-Tex.), who stood behind Abbott, told O’Rourke to “sit down.” Another official onstage, Uvalde Mayor Don McLaughlin, got up from a folding chair on the side of the stage and called out that O’Rourke was “a sick son of a b—-” for coming to the news conference “to make a political issue.”

Abbott mostly avoided eye contact with O’Rourke while he was speaking and did not respond. As security officers began escorting O’Rourke out of the auditorium, he turned around and pointed at Abbott.

“This is on you. Until you choose to do something, this will continue to happen,” O’Rourke said. “Somebody needs to stand up for the children of this state, or they will continue to be killed.”

Elsewhere in the auditorium, some people could be heard shouting “Let him speak! Let him speak!” and “What happened to the First Amendment of the Constitution? Freedom of speech?”

Outside the high school, O’Rourke told reporters that he had come to the news conference because “we owe our kids something.”

“We owe the children in the next school where a gunman’s going to walk in with an AR-15 unless we intervene and stop that — we owe them something,” he said. “And that’s why I’m here.”

O’Rourke has been outspoken about stricter gun-control measures since a gunman opened fire in a Walmart and killed 23 people in his hometown of El Paso in 2019.

At the time, O’Rourke was one of nearly two dozen Democratic candidates running for president. He immediately left the campaign trail to return to El Paso and unleashed his frustration on President Donald Trump as well as the media.

O’Rourke linked Trump and his inflammatory, anti-immigrant rhetoric to racism that motivated the accused shooter, who said he was specifically targeting “Mexicans,” according to police.

“What do you think?” O’Rourke said then, when a reporter asked what more Trump could have done. “You know the s— that he’s been saying. He’s been calling Mexican immigrants rapists and criminals. I don’t know, like, members of the press: What the f—?”

O’Rourke threw his hands up: “It’s these questions that you know the answers to. I mean, connect the dots about what he’s been doing in this country. He’s not tolerating racism. He’s promoting racism.”

At a presidential primary debate a month after the shooting, O’Rourke said he would commit to a mandatory buyback of weapons such as AK-47 and AR-15 rifles if he was elected president.

“If it’s a weapon that was designed to kill people on a battlefield, if the high-impact, high-velocity round when it hits your body shreds everything inside of your body because it was designed to do that, so that you would bleed to death on a battlefield not be able to get up and kill one of our soldiers,” O’Rourke said on the debate stage. “When we see that being used against children … hell, yes, we’re going to take your AR-15, your AK-47.”

Conservative politicians and right-wing activists would seize upon that phrase — “hell, yes, we’re going to take your AR-15, your AK-47” — to paint O’Rourke as extreme on the issue of gun control.

Earlier this year, asked about his 2019 comments in the midst of his campaign for governor, O’Rourke said he was “not interested in taking anything from anyone.”

“What I want to make sure we do is defend the Second Amendment,” he said in February.

O’Rourke later told the New York Times that he was not walking back what he said about assault weapons but trying to focus on what he could “actually do as governor.” He said he still supported universal background checks and requirements for safe gun storage.

“I don’t think that we should have AR-15s and AK-47s on the streets of this state — I have seen what they do to my fellow Texans in El Paso in 2019,” O’Rourke told the Times. “I haven’t changed a thing about that. I’m just telling you I’m going to focus on what I can actually do as governor and where the common ground is.”

Wang and Iati reported from Washington.