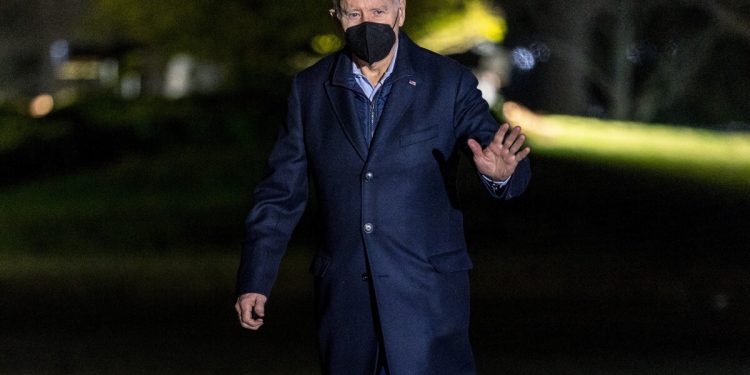 On the eve of President Biden’s first press conference in 10 months, White House Press Secretary Jen Psaki stepped to the briefing room podium on Tuesday and referred to the television screen over her shoulder that detailed what she described as the administration’s year-one accomplishments — 6.4 million jobs created; the unemployment rate below 4%; 75% of the country vaccinated against COVID-19 and 95% of schools now open.

When the president steps into the East Room Wednesday afternoon for just the second press conference since taking office, he’ll talk, Psaki said, about “how to build on the foundation we laid in the first year.”

The one-year milepost, historically, is a pivot point for presidents, the natural transition from fighting to enact their agenda to selling it to voters ahead of the November midterm elections. But Biden’s first-year agenda remains incomplete, to the frustration of his aides, Democratic activists and a weary public.

“You don’t get everything done in the first year,” Psaki said. “But what we feel good about is: coming into an incredibly difficult circumstance — fighting a pandemic, a massive economic downturn as a result of an administration that was prior to us that did not effectively deal with a lot of these crises — there’s been a lot of progress made.

“We need to build on that,” she continued. “The work is not done, the job is not done, and we are certainly not.”

Facing strong political headwinds, Biden is eager to shift the latest narrative around his presidency that his ambitions and experience have been no match for the crises he has confronted.

“He’s trying to do a lot,” said Peter Hart, a Democratic pollster. “But it feels like he’s in a pinball machine and he’s bouncing off a lot of different obstacles. Biden won because voters were looking for stability and he came in with clear priorities, but he hasn’t quite gotten those priorities under control.”

The challenges only appear to be growing:

The Supreme Court last week blocked the administration’s vaccine mandate for most large employers. And political polarization, which Biden had hoped to ease, has only continued to calcify, making it all but impossible for the president to lead the sort of unified national response to the public health crisis necessary for the country to finally turn the corner.

Despite record low unemployment, job growth and rising wages, inflation continues to rise to levels not seen in decades — a wet blanket on an otherwise robust economy. The Child Tax Credit enacted in March as part of Biden’s $1.9-trillion American rescue plan, which directed monthly payments to families and reduced child poverty, ran out last week.

Overseas, the prospect of war in Europe appears to be increasing as Russian President Vladimir Putin has yet to heed Biden’s call to remove the troops stationed on the border with Ukraine.

Given everything, it’s no surprise that only 26% of Americans say things are going well at the moment, according to a new CBS News poll that had Biden’s approval rating at the one-year mark at 44%.

Biden and Democrats have to hope that the president’s recent political setbacks will have long faded by the time voters consider their options in November and 2024, said Cornell Belcher, a Democratic pollster. But, he said, the administration should more forcefully rebut the narrative of the moment “that Biden can’t get anything done” by pointing to already secured accomplishments, such as passing a $1.75-trillion bipartisan infrastructure law.

“They’ve gotta do a better job of selling what they’ve done,” Belcher said. “And we also have to make Republicans pay a price for what they’re doing. We’ve failed to make them pay a price for standing in the way and blocking everything the president wanted to do. Look at polling: the child tax credit, the climate provisions [in Build Back Better] are broadly popular. Sizable majorities want these things. But if we don’t get on offense and make Republicans answer for why they’re against it, we’re going to lose the House and likely the Senate, too.”

Despite entering office amid compounding crises, Biden nevertheless has sought to deliver sweeping generational reforms. But his lofty aspirations have run into legislative realities in the evenly divided Senate.

Just before Christmas, Democratic Sen. Joe Manchin III of West Virginia torpedoed the administration’s $1.8-trillion climate and social spending package. The White House then shifted its focus to an even riskier legislative gambit, encouraging all 50 Senate Democrats to change the filibuster rule in order to pass federal voting rights protections with just 50 votes — only to have Manchin and another moderate Democrat, Sen. Kyrsten Sinema of Arizona, make it clear, as they had several times already, that they would do no such thing.

Elected in large part by Black voters, Biden’s sudden leaning in on voting rights was meant to convey his own conviction, even if the political reality in Washington ensured that he was likely setting himself up for another setback. Activists, many of whom praised Biden for his impassioned call to arms on the issue in Atlanta last week, are sure to be disappointed when the Senate fails to muster the votes to circumvent unanimous Republican opposition.

There is more optimism, however tempered, about salvaging some components of the Democratic spending package Biden dubbed “Build Back Better.” Psaki, the White House press secretary, said Tuesday that the administration doesn’t have a substitute proposal it’s considering yet and is still talking with lawmakers “about what to do next.”

John Podesta, a former top aide to Presidents Clinton and Obama, is cautiously optimistic the administration and Manchin will cobble together an agreement to salvage the $500 billion in investments to combat climate change and perhaps other elements of the original legislation. If such a deal can be struck, Podesta said, he expects it would come together in the six weeks before the State of the Union address, which has been tentatively scheduled for March 1.

“Time is of the essence, so if there’s a deal to be cut with Manchin, go cut it. And if progressives like myself have to swallow a lot, we’ll swallow it,” said Podesta, chairman of the board of the Center for American, a left-leaning think tank. “Because there is no second chance on this. If [Biden] loses these investments now, you can’t imagine a path forward where both the U.S. meets its commitment [to reduce emissions by 50% by the year 2030] and inspires others to increase their own ambition.”

Podesta added that the Wednesday press conference could be critical in Biden’s efforts to reclaim the narrative in 2022.

“In the Clinton White House, we called these [press conferences] ‘bust the piñata’ exercises,” he said. “But projecting strength and confidence is really critical. He just needs to emphasize that every day is a new opportunity, that he’s got a plan for making people’s lives better and he’s going to just pursue that with vigor.”