Biden trumpets strong jobs report: ‘America is back to work’ 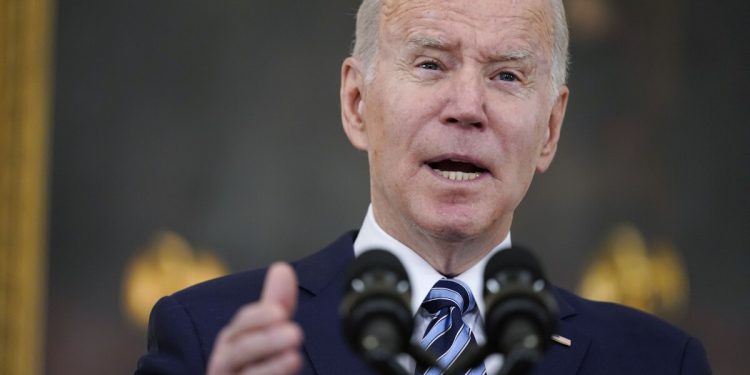 President Biden on Friday hailed new jobs numbers that showed a burst of hiring in January despite a surge in COVID-19 infections caused by the Omicron variant that killed thousands and forced businesses and schools to shutter.

“Our country is taking everything [the pandemic] has thrown at us and come back stronger,” Biden said in an address from the White House. “America’s job machine is going stronger than ever, fueling a strong recovery and opportunity for hard working men and women across this country. America is back to work.”

The Labor Department reported that U.S. employers added 467,000 jobs, and updated its estimate of job growth for November and December by a combined 709,000. The unemployment rate ticked up from 3.9% to 4%, a figure that is still historically low. The unexpected hiring gains showed American employers’ willingness to add employees even as the pandemic continues to hamstring the economy.

The jobs report comes as Biden has had political setbacks in recent months, starting with the chaotic pullout from Afghanistan in August and continued more recently with the demise in Congress of a social spending package and voting rights measures. Consumers are also being squeezed by inflation not seen in 30 years.

With his poll numbers sagging — 56% of Americans disapprove of the job he is doing, according to a Reuters/Ipsos poll released Thursday — the president has been eager to highlight good news in the hopes of building momentum heading into the November elections. Biden on Thursday announced that the leader of Islamic State died in a U.S. military raid this week in Syria, and he is preparing to announce his pick of the first Black woman to the Supreme Court.

Thanks to Biden’s low approval rating and legislative setbacks, Democrats are concerned about their prospects in the midterms, which typically favor the party not occupying the White House.

Cornell Belcher, a Democratic pollster, said Biden’s party needs to trumpet good news like the jobs report if it hopes to change the narrative that things are headed in the wrong direction and the economy is struggling. A recent NBC News poll found that 72% of Americans believe the country is on the wrong track.

“The job numbers are pretty amazing,” Belcher said. “But the question is whether or not Americans will see them.”

Economists said the jobs numbers reflect employers’ expectations that the Omicron wave of infections will not derail business for too much longer.

Daniel Zhao, senior economist at the employment website Glassdoor, told the Associated Press that the healthy hiring — not only for January but also for November and December — is a sign that last month’s gains weren’t merely a blip.

“This is an actual trend, and job growth was faster than we realized,” Zhao said.

Justin Wolfers, a professor of economics and public policy at the University of Michigan, said the numbers signaled the “economy is improving.” But its recovery, he added, has been somewhat uneven.

“A lot of people, particularly older people, have dropped out of the labor force altogether. So for them, the economy doesn’t look healthy at all. So, things are getting better. We’re getting back towards the pre-pandemic economy. And whether you think we’re all the way back or not depends a lot on your personal circumstances,” Wolfers said.

The surprisingly healthy hiring figures will likely give the Federal Reserve leeway to raise interest rates more quickly to cool inflation. The Fed has already indicated that it will begin raising rates in March, and it could do so again at its next meeting in May.

Yet the economy’s strong growth and hiring gains were accompanied by the highest inflation in four decades, magnified by brisk consumer spending on furniture, electronics, appliances and other goods and vast infusions of federal aid that have now largely expired.

Biden acknowledged inflation was squeezing consumers. “Average people are getting clobbered by the cost of everything today,” Biden said, urging Congress to pass his social spending plan to relieve the financial burden faced by Americans from inflation. “Gas prices at the pump are up. We are working to bring them down, but they’re up. Food prices are up. We’re gonna bring them down as well.”

— The Associated Press and Bloomberg News contributed to this article.

Rob Delaney marks 20 years of sobriety: ‘It can happen for you’

Rob Delaney marks 20 years of sobriety: ‘It can happen for you’