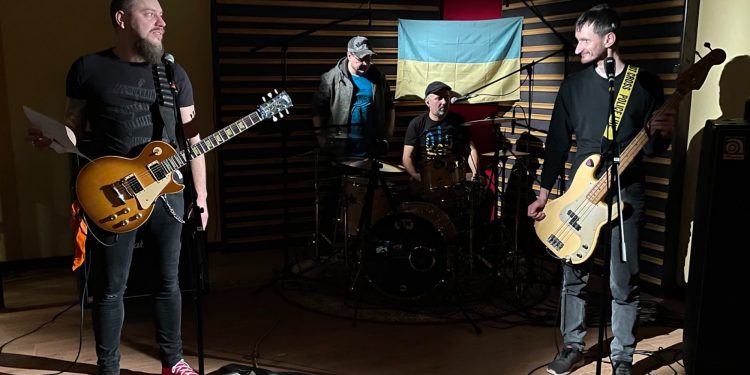 
Billy Bragg and Ukrainian punks Beton have spoken out after an online debate emerged when the band were accused of co-opting far-right imagery.

Last week, Beton reworked The Clash’s iconic track ‘London Calling’ to create ‘Kyiv Calling’, a protest song against the ongoing Russian invasion. Their rendition was then shared by The Clash’s social media accounts, as well as by Bragg.

Bragg then deleted his share and issued a statement, after images were brought to his attention of Breton members wearing Ramones-inspired t-shirts, with the word ‘Ramones’ at the top of the logo replaced with the word ‘Banderas’. “Although all of the names within the circle were not visible, there was one that clearly read ‘Stepan’,” explained Bragg.

“This is deeply troubling. Stepan Bandera was a far-right Ukrainian politician who collaborated with the Nazis during the occupation of Ukraine and whose followers were complicit in the Holocaust. That he did these things in the name of Ukrainian independence from the Soviet Union has led some present day far right nationalists to adopt his image in their decade long struggle with Russia.”

“The knock on effect of this has been to allow Putin to smear all those who want a democratic Ukraine, free from Russian influence as neo-nazis.”

Breton and Bragg have now revealed that they have been in discussion over the image and the complicated history of Bandera – a Ukranian nationalist who was both a collaborator with the Nazis as well as later imprisoned by them. Many view Beton as a liberator of Ukraine who fought against multiple oppressive and invading states, while many others view him as a fascist and war criminal and condemn him for his part in the massacres of Polish civilians.

Writing on Facebook, Beton apologised for any offence caused by the phones of the t-shirts emblazoned with Bandera’s name, and said that they had now been removed.

“We understand that perceptions of Bandera around the world are different from those held by many Ukrainians,” the band wrote. “We realise he is a very controversial figure, and we would like to clarify our position.

“Like many eastern European countries during the 20th Century, Ukraine suffered greatly from being invaded by both Nazi Germany and the Soviet Union. Badera’s passion for Ukrainian independence led him to both collaborate with the Nazis and then turn against them when they tried to suppress the country. During the most troubling period in our nation’s history, Bandera was sent to a concentration camp for resisting the Nazis.”

They continued: “His experience is a reminder that our history is complex, and we accept there are very dark chapters in it. Nonetheless, we believe that it is up to all Ukrainians, irrespective of their ethnic or religious affiliations, who finally have secured the opportunity to openly and democratically debate the legacy of their historical figures, to ensure that this debate includes acknowledging and accepting crimes that have been committed both against them as victims and by them as perpetrators.

“We need a national debate about our history and contested memory – exactly the kind of debate that would be impossible in Putin’s Russia. The invader is trapped by the past, seeing everything through the prism of Russia’s imperial history. We in Ukraine are seeking to escape that prison and to take our place as a nation free to make our own democratic choices.

Beton added: “This is the Ukraine that we are fighting for – a place where people of all races and creeds can work together to build a nation free from oppression.”

Bragg then took to Facebook to reveal that he had been in dialogue with Beton guitarist Andriy Zholob, who said that he was “understandably concerned by my criticism”.

“He’s a doctor currently working in Lviv with traumatised refugees from the war zones in his country,” wrote Bragg. “Beton, he said, are an anti-fascist band and he asked me to help craft a statement that both apologised for the offence caused by the shirts and clarified the band’s position.”

A host of artists are pledging their support to victims of the Ukraine conflict since the war began last month.

Arcade Fire have been performing a slew of last-minute Ukraine benefit concerts in New Orleans with all proceeds going to the Plus1 Ukraine relief fund, which is supporting Ukrainian people through non-profits providing humanitarian aid as Russia’s invasion of the country continues. This culminated in the band teaming up with David Byrne to cover Plastic Ono Band’s ‘Give Peace A Chance‘.

Belle And Sebastian also shared new single ‘If They’re Shooting At You’ in support of those affected by the conflict in Ukraine earlier this week, while Bring Me The Horizon also paid tribute to the people of Ukraine recently at the BandLab NME Awards 2022. Synth-pop legends Devo are also donating one month’s licensing revenue to Ukraine relief efforts.

One of the larger benefit gigs, next week will see the ‘Concert For Ukraine’ take place in Birmingham. Announced last week, the two-hour benefit show will air March 29 on ITV in aid of the Disasters Emergency Committee‘s (DEC) Ukraine Humanitarian Appeal.

Currently serving on the country’s frontline, popular Ukrainian band Antytila have also offered to perform remotely at the concert from Kyiv.

Visit here to donate to the Red Cross’ Ukraine appeal.

Opinion: How ‘washed up…old man’ Warren Buffett is getting the last laugh