Colours of Distant Life – The Poetry of Science 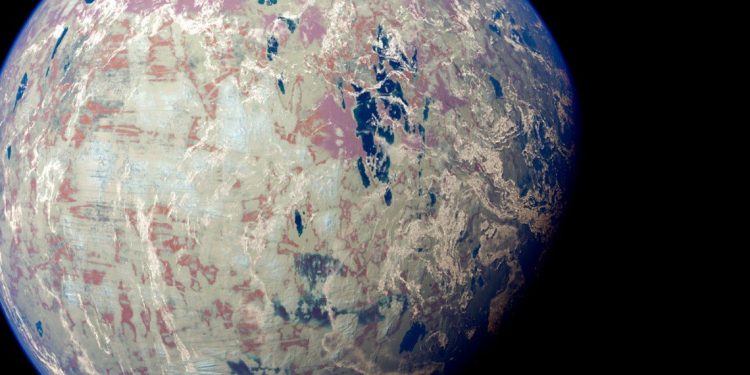 
A vibrancy fans out
across the bay,
blues and greens
tipping over into reds
and cannot-be-seens;
vivid signatures
sketched out in bands
across the frozen,
broken water.
Carefully we pick the hues,
dropping colours
into spectral baskets –
bouquets of ice
to catalogue new life
amongst the stars.

This poem is inspired by recent research, which has created a colour catalogue to help find life on distant, frozen worlds.

The search for life on extra-terrestrial planets has tended to focus on exoplanets (those planets that orbit a star outside the solar system) that are neither too hot or too cold, and which are fairly similar in their makeup to Earth, i.e. rocky planets that are a comparable distance to their nearest star as we are to the Sun. However, recent research has also shown that snowball planets (i.e. rocky planets like Earth with their oceans frozen) could also sustain life. Such worlds would have no liquid water on their surfaces, just ice, and little to no land areas. Yet, if these land areas were near the equators of these planets, then the temperatures in those regions could be warm enough to make them more habitable. Furthermore, extremophiles (organisms such as lichen or bacteria that are able to live in extreme environments) could also survive and prosper in the extreme cold of these distant frozen planets and moons.

In searching for life on the surface of icy exoplanets and exomoons, it is also necessary to have something to compare these observations to. In this new study, researchers have developed a colour-coded guide based on the reflection spectra of 80 microorganisms found in ice and water, here on Earth. These samples were taken from Kuujjuarapik, Quebec, from right across the frozen Hudson Bay. This study also found that such biosignatures were more intense in drier environments, suggesting that locations that are drier than Earth and which contain microbial life forms could potentially represent good targets for future space missions. The spectra library that was produced in this study covers the visible to near-infrared and it is now hoped that it will act as a guide for future searches for surface life on icy worlds.

With help from Derek RobertsonProgramming...

Coinbase to lay off 18% of workforce as crypto winter hits

Coinbase announced Tuesday it will...

JSR’s Eric Johnson: ‘I encourage people to tell me exactly how they think’

When Eric Johnson took over...