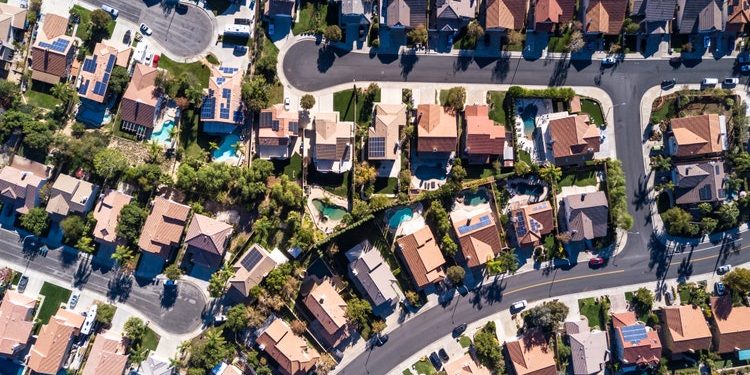 
The housing market has been on a wild ride over the past two years. Home prices have risen dramatically by around 33% as demand accelerated under ultra-low mortgage rates. Today, the positive impact of low rates is now waning as mortgages have become far more expensive. Last July, the average U.S. 30-year mortgage rate was 2.8%today, it is around 4.7%, making today’s homes less affordable than they were just months ago. Already, this trend has resulted in a sharp decline in the total U.S. pending home sales, though there has been a continued increase in building permits. See below:

Following the enormous bullish shock to the housing market, there is still a relatively low existing home inventory. Resultingly, homebuilding companies such as D.R. Horton (NYSE: DHI) have been in a goldilocks environment of high demand and strong affordability. However, the affordability factor has now soured with rising mortgage rates, potentially upsetting sales prices. Construction costs continue to grow as the price of lumber and other crucial construction commodities have not let up, potentially squeezing builders’ bottom line from both ends.

Still, homebuilder stocks are generally cheap today based on traditional valuations. D.R. Horton has a forward “P/E” of merely 4.8X and has lost roughly a third of its value since December as the potential impact of rising mortgage rates is accounted for. Overall, the situation has put DHI, and most other homebuilder stocks, in a very tight position with high “value trap” potential. To fully understand the dynamics at play, we must consider the macroeconomic situation and how it will likely impact D.R. Horton and its peers.

Large national homebuilding companies like D.R. Horton operate essentially at the whim of the economy. Builders can make efforts to develop homes in select regions and particular types of homes with higher sales demand. Today, this typically means smaller “entry-level” homes in more affordable areas such as the South East and South Central regions. In general, both younger, newer buyers and older “downsizing” home buyers have shifted their preference toward smaller homes. Additionally, many people are leaving expensive areas of the country, such as California, to improve lifestyle affordability.

These trends have bode well for D.R. Horton, which has focused its operations on fitting these trends. Importantly, this gives the company some shielding from macroeconomic factors as the sharp rise in mortgage rates will likely prove far more detrimental in expensive areas than in less expensive ones. Unsurprisingly, most less affordable West Coast states also have higher unemployment rates today, adding to downside risk given the negative economic impact of rising rates.

Still, while much evidence suggests that higher mortgage rates will dramatically hamper home sales, much of the U.S. property market is technically in a “boom.” Home inventories remain around record lows, and data suggests very few homebuyers are in default. Additionally, construction spending on residential properties has risen at a record pace:

Undoubtedly, the property market situation today is far different than it was in 2006-2008, albeit with a few similarities. Home price-to-income ratios are near the same levels then, though this has had a minor impact as mortgage rates were far lower than in the 2000s. However, now that they are back near 5%, many new home buyers are overextending their income to a similar extent. Banks have been less lenient when it comes to subprime and variable rate lending, so the shock of higher rates will likely impact new home sales (and thus D.R. Horton), but not necessarily most homeowners as it did in the 2000s. Still, with skyrocketing inflation, real hourly incomes are on the decline, and savings rates have slipped below pre-COVID levels, implying many people may soon struggle to meet payment obligations as they pay more for groceries and gasoline. See below:

In my view, this situation does not bode well for most of the U.S. housing market. While most of the issues which plagued the market in the 2000s do not exist, other constraints, such as falling real incomes and savings, may cause the same net result. The result is a decline in home sales prices and a potential rise in foreclosures as some struggle to meet mortgage payments. Unlike the 2020 shock, homeowners can no longer refinance and extend mortgages at lower rates to avoid default as they had in the past. More broadly speaking, due to non-controlled inflation, the U.S. Federal Reserve also likely cannot bailout the mortgage market once again (through MBS Q.E. purchases) to avert a systemic shock.

Overall, it remains undecided how the sharp rise in mortgage rates will impact new home sales. While the housing market is still “strong” on paper, much of this is based on pre-mortgage spike data. Indeed, I would not be surprised if many of today’s pending home sales fail to close as homebuyers are shocked by significant increases in mortgage interest costs. While it seems the market impact will be lower in D.R. Horton’s high-inventory regions, the company will still likely see a sharp decline in sales just as its construction activity accelerates over the coming year. Fundamentally, the critical risk facing D.R. Horton is that mortgage rates are now “high,” but how fast they have risen as a continued rise could prove quite shocking.

Is D.R. Horton Cheap, Despite The Slowdown?

Based on TTM metrics, D.R. Horton is very cheap. However, TTM metrics are potentially poor indicators of future earnings as the rapid shift in the macroeconomic situation may make the company unprofitable very soon. On a TTM basis, DHI is trading at a “P/E” of 6.1X and an “EV/EBITDA” of 5.1X, both of which are roughly 50% below the sector’s median. D.R. Horton has also seen robust profit growth. Based on other analysts’ views, it is expected to see its earnings continue to rise, giving DHI an extremely attractive forward “P/E” of 4.8X. That said, investing based on future earnings estimates can be a poor decision for highly cyclical firms like D.R. Horton.

On the one hand, D.R. Horton does have impressive EPS growth from $4 pre-COVID to $12.50 today, with a sharp rise in gross margins despite rising construction costs (lumber, labor, transportation, etc.). Additionally, the company’s inventory has nearly doubled to $18.2B. See below:

This trend is undoubtedly impressive, but it should be noted that the company has not realized most of these earnings. D.R. Horton’s annual operating cash flow was $612M TTM last quarter (or just $1.60 per share), down from $1.4B in mid-2020. This is mainly because the company has reinvested virtually all of its earnings into new home development projects, thus causing immense increases in its change inventories. While this may mean D.R. Horton’s operating cash-flow skyrockets over the next year, it may also indicate the company has been too aggressive in pursuing growth and may have overextended itself. While cash flow may be less critical for homebuilders in good times, cash usually is king when the economy turns. Of course, with inflation skyrocketing, it may be better to own inventory than cash, even during a recession.

Overall, there is a lot to like about D.R. Horton, and there is a bit to be skeptical of. Firstly, its valuation should be taken with a grain of salt since preliminary evidence suggests rising mortgage rates are causing new home sales to decline. Since D.R. Horton has reinvested most of its income into sizeable new development projects, it may soon find itself with many assets and very little cash and have difficulty selling homes at projected prices. At the same time, the company’s financial debt-to-assets is far lower than it has been, giving it some cushion in case of a storm. Even more, while its true forward “P/E” valuation will likely prove to be well above 4.8X, the stock is only around 30-40% above its pre-COVID levels despite immense profit growth, so it is certainly not in a bubble (as I believe, most stocks are).

The current tangible book value per share of DHI is $44. Today, its price-to-book ratio is nearly exactly within the average range it has held over the past decades. Thus, while it is certainly possible that DHI continues to decline, the stock does not appear to be overvalued, nor does it seem to be undervalued. Investors who have a bullish long-term view of the housing market may still find value in D.R. Horton. However, given the rapidity to which mortgage rates have risen, I still believe the stock is best avoided since a continued increase in rates could eventually result in a credit-market freeze, putting D.R. Horton in a difficult financial situation. Thus, while I am not as bearish on DHI as I am on most equities today, I see little value in the stock at its current price.

The top MCU villains – from Thanos to Loki | Films | Entertainment

The top MCU villains - from Thanos to Loki | Films | Entertainment