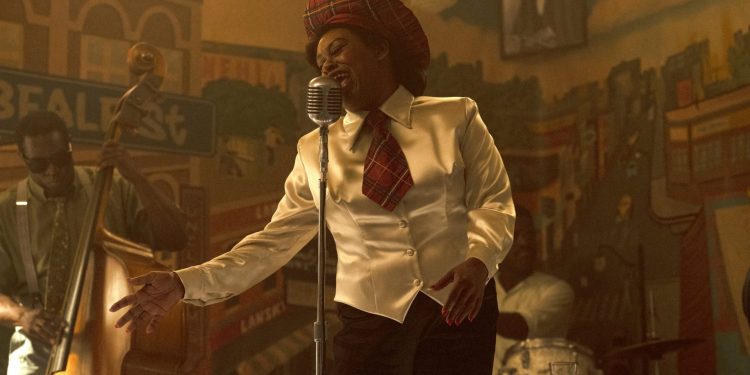 
Elvis actor Shonka Dukureh was tragically found dead by one of her children in her apartment in Nashville.

Shonka, who played Big Mama Thornton in the new Baz Luhrman Elvis biopic, has died at the age of 44, TMZ reports.

Shonka Dukureh died at the age of

The publication reported the actor was found dead by one of her children, in her bedroom. Her child then alerted their neighbour who called 911 at around 9.30am on July 21.

No cause of death has been reported by police, as investigators will be awaiting autopsy reports before determining a cause of death but they do say there is no suspected ‘foul play’ concerning her death.

Her death was confirmed by the Nashville Metropolitan police department, via social media, they also shared Shonka was a Fisk University graduate.

Nashville mayor, John Cooper, was among those to pay his condolences to her family, calling it a ‘sad day’ and recognised Shonka’s talent.

Shonka is survived by her two children, a son and a daughter, who she lived with in her Nashville apartment. Shonka kept the lives of her children relatively private, only occasionally sharing images or brief videos of them on her social media accounts.

A recent video she posted with her daughter is her talking about the recently released Elvis movie where the young girl says she’s going to watch the movie her mother starred in. There’s a tender moment where the little girl sings ‘you ain’t nothing but a hound dog’ while sitting with her mum.

Besides the one video, Shonka kept her personal life private.

During her career, Shonka not only starred in the Elvis movie but also appeared onstage with Doja Cat at Coachella this year to collaborate on the song ‘Vegas’ for the Elvis soundtrack.

Mom who ran into school during Uvalde, Texas shooting discusses moments inside

Mom who ran into school during Uvalde, Texas shooting discusses moments inside