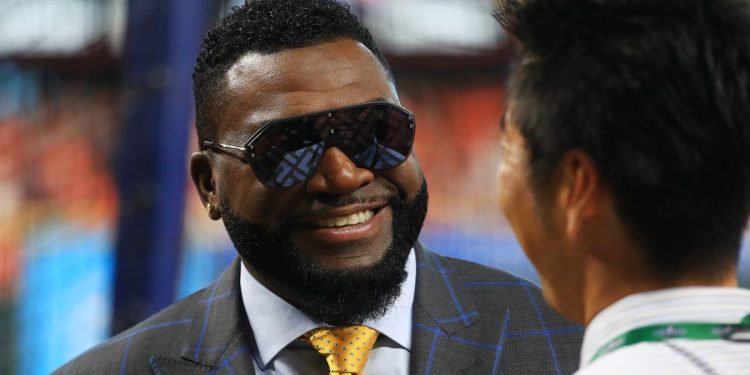 
Congratulations to David Ortiz on being elected to the Baseball Hall of Fame. What an accomplishment and what a thrill, though the poor guy did have to suffer through a grueling Tuesday waiting to receive his due.

Ortiz likened it to going to a gym for the first time and wanting to ride an exercise bike for 30 minutes, but each minute is harder than expected. By noon on his big day — still six hours to go before a “yes” or a “no” — he was already close to spent emotionally.

One can only imagine the torment.

It all worked out. Ortiz received 77.9% of the vote — a few ticks above the 75% threshold required for induction — from the Baseball Writers Association of America electorate. Hear, hear, we have our newest first-ballot legend.

“I feel so thankful and grateful,” he said.

He damn well should be. Because only in the convoluted, hypocritical, sanctimonious realm of baseball and its Hall could something like this happen.

That’s no slam at Ortiz, a 10-time All-Star and three-time World Series champion who hit 541 home runs and personified the word “clutch.” He belongs in Cooperstown despite a 2009 New York Times report that he was included in the famed Mitchell Report for having tested positive for performance-enhancing drugs in 2003.

But why him? Why a number of other suspected steroid users? Why Tony La Russa or any other manager of a team that was knee-deep in no-good during one of the darkest eras in the history of the sport? Why Bud Selig, the commissioner on whose watch the whole house went up in flames?

Why are they in but Barry Bonds and Roger Clemens — the best hitter and pitcher, respectively, of their era — are out?

And if Bonds and Clemens remain out, what hope does former Cubs superhero Sammy Sosa have of ever getting in?

Ortiz had a long day. Bonds and Clemens — and Curt Schilling — have waited bitterly and painfully through a decade of rejection from baseball writers. And Sosa? He’s just getting started. Did he really hit those 609 home runs? Was he really the first big leaguer to hit 60 or more three years in a row? Come to think of it, did he even exist?

More than anyone else’s candidacies, those of Sosa and Mark McGwire — his partner in the cartoonish home run chase of 1998 — have been utterly sunk by ties to the steroid era. McGwire topped out at 23.7% of the vote and was at only 12.3% by 2016, his final year on the ballot.

There’s no rhyme or reason to Sosa and McGwire being the co-captains of Team Steroids. They weren’t alone. Other superstar players cheated and broke the rules. Their skippers and their bosses upstairs averted their eyes and their consciences. Many of the writers who vote today were themselves complicit, derelict in their journalistic duties.

Did Sosa lie before Congress? Did he cork his bat? Did he put himself above his teammates? Did the Chicago media rightfully turn on him?

If you’re the type who still reads a newspaper, you know the answers to those questions — and all the gnarly details therein — inside and out.

I’m not a Hall voter. I don’t regard the game of baseball and its shrine with a religious reverence as some of my colleagues do. Maybe it’s easy for me to say, then, but put Sosa in Cooperstown. McGwire, too. Throw in Pete Rose — the flippin’ Hit King — and, by God, the Hall is a joke every day it opens its doors without Bonds and Clemens represented in full inside.

Put the best players in the Hall, and do the work a museum worth its salt should endeavor to do of explaining why it’s significant and what it all means. If that means there should be a Steroid Era wing, then just create it already. In fact, it’s long overdue. (In regard to Rose, the whole league is shamelessly in bed with gambling now.)

Also in Year 10, Bonds (66%) and Clemens (65.2%) fell short again. Their fates, along with Schilling’s, Sosa’s and others’, now are in the hands of the Hall’s veterans committees, which already have elected six new Hall of Famers for the 2022 class: Minnie Minoso, Buck O’Neil, Bud Fowler, Jim Kaat, Tony Oliva and Gil Hodges.

The Today’s Game committee will be responsible for elections of non-ballot players to the class of 2023, and there will be some extra-large fish to fry. Just ask Ortiz, who calls Bonds his “idol” and will go into the Hall knowing full well there are some not-so-much-older guys on the outside looking in who were flat-out better than the majority of those enshrined.

“Not having them join me at this time is something that’s hard for me to believe, to be honest with you,” he said. “Because they did it all.”

They sure as hell did enough.