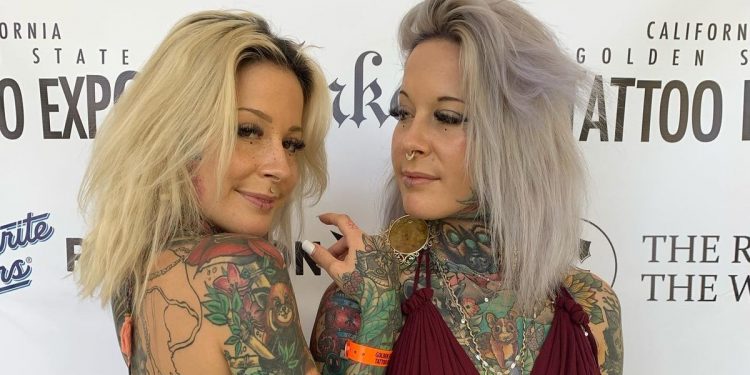 
More women are getting tattooed than ever before – and some have opted for extreme ink.

According to 2020 research from McCrindle, 31% of women have a tattoo compared to only 19% of men.

While today, slow and steady social acceptance has helped the tattooing industry grow bigger, there are still some people society thinks have taken it too far.

Here, we take a look at some of the radical tatts women have chosen to get done.

A woman who labels herself as a “goth” and “LaVeyan Satanist” has covered 98% of her body in satanic art.

Amber Luke, from Brisbane, Australia, said she identifies with the devil-worshipping movement because it encourages individualism, with the majority of her tattoos dedicated to the devil.

The particular branch of Satanism that the 26-year-old follows rejects the existence of supernatural beings and life after death.

And contrary to popular belief, practitioners don’t believe that Satan actually exists, nor do they worship him.

Instead, Satan is viewed as a positive figure that represents pride, carnality, and enlightenment.

Amber has more than 600 tattoos on her body, which includes a horned woman on her body and skulls on her torso.

One of her inkings is the word “death” etched onto her fingers in bold calligraphy and 666 on her face, which is described as the “number of the beast” in manuscripts of the New Testament.

Since then, Kerstin Tristan’s covered her entire body in ink, with a particular focus on floral and butterfly art.

The age-defying beauty loves showing off her body art on Instagram where she has gained 184,000 followers under the name @tattoo_butterfly_flower.

It isn’t hard to see why she’s gained such a strong fanbase, as it’s all thanks to her striking photos.

Kerstin is scantily clad in all of her uploads, as this is the best way to show off the colourful work she’s had done.

Her followers regularly shower her with praise.

Now she’s selling explicit content on OnlyFans to make some extra cash, showing off the extent of her tattoos.

Previously a cam girl, she has now turned to the subscription service to help support her family.

Her OnlyFans bio reads: “The sexiest tattooed goddess to grace this planet. I’m draped head to toe in tattoos!

“I’m best known as Britain’s most tattooed woman, from the fetish scene or from my multi-international front covers for tattoo magazines.

“I enjoy travelling getting tattooed and being naked! Wanna chat with me? Me inbox is always open to get naughty with you [sic].

“I’m available for cam shows and private requests too, just send me a message!”

Alicia Amira has dedicated her life to transforming herself into a real-life Barbie doll.

The 31-year-old, who lives in Dorset but is originally from Sweden, began her transformation after quitting her PR job.

She has had her eyebrows tattooed higher, thicker lashes and her fingers, chest and neck tattooed.

Alicia has also had surgery on her boobs, forehead, eyes, cheeks and lips – and she isn’t done yet.

“I feel free and powerful doing exactly what I want, I’m healthier, happier and sexier than ever all in the name of being a plastic bimbo f*ck doll. Bimbos don’t age, we just get more plastic,” she wrote in an Instagram caption.

Alicia said she had been wanting to ‘bimbofy’ her look ever since she was a kid but because she comes from a traditional family, she had to keep her conventional looks until she went to university in Copenhagen when she was 18.

It was then she started transforming herself with tattoos before turning to plastic surgery.

Identical twin sisters Aline and Alena – AKA the tattooed twins of Hollywood – share a passion for ink, having tattooed most of their bodies.

Their variety of colourful inkings are mainly inspired by nature and can be seen on their legs, chest and even their faces.

Originally from Stuttgart in Germany, they were drawn to the bright lights of Hollywood when they decided to become tattoo artists.

The twins have even gone as far as etching designs onto each other’s faces – specifically, their foreheads.

They previously decided to both get the same tattoo. However, the matching tats were not exact copies of each other as they opted for different colours.

The twins are likely to grow their ink collections even more in the future.

Alena previously admitted: “This is an addiction. We always want new stuff.”

To stay up to date with all the latest news, make sure you sign up for one of our newsletters here.

Science Says This is the ‘Most Boring Person in the World’

Science Says This is the 'Most Boring Person in the World'