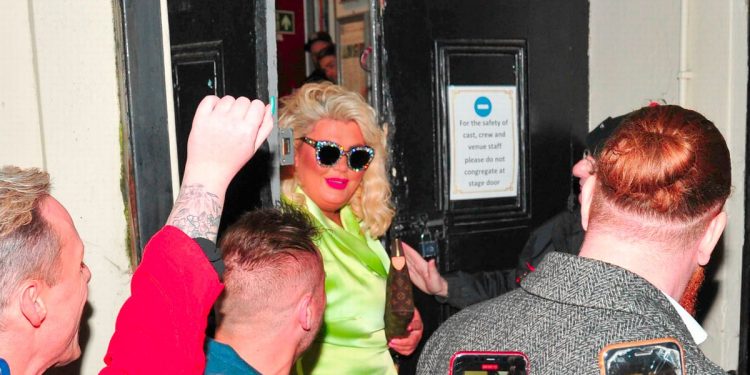 
Gemma Collins shared a sweet family moment with her Instagram followers on Monday night, ahead of taking to the stage in London.

The former TOWIE icon, 41, is currently touring the country with her one-woman show, The GC’s Big Night Out.

Hours before performing for her fans at the Troxy, London, the reality TV legend revealed there would be a VIP guest in the audience that night – her eldest nephew.

Glammed up and ready to perform, Gemma filmed herself and her rarely-seen relative for her 2.2million followers.

“I’ve got a very VIP guest tonight, my eldest nephew Caine, that you don’t get to see very much,” she told her fans as she panned the camera around to Caine chatting on the phone, who gave a thumbs up.

The Essex native continued: “He’s so grown up, but he’s a bit shy so he’s not on the Gram much, but I am so happy he is here.”

Gemma added a ‘I love you’ sticker to her cute Instagram Story on Monday night.

The blonde beauty has been spilling the tea on her one-woman tour over recent weeks – telling the audience in Manchester about her plans to start a family with fiancé Rami Hawash.

“I want to try for my own baby but I think in August,” Gemma told fans at The Manchester Opera House last week.

“August is going to be the time cos I will get a little bit of downtime.

Last year, Gemma opened up to the Mirror about her rekindled romance with businessman Rami.

After enjoying an on-off relationship with Rami over the last decade, at one point being briefly engaged to be married in 2013, we quizzed the blonde beauty about why things are different between the pair these days.

Their engagement came to an end in 2014, just weeks before they were set to tie the knot, and since their break up, Rami became a father to four-year-old Tristan.

“You know what? I’m over the moon,” she revealed to us when asked about her reunion with her former flame.

“I’m delighted. I’m the happiest I’ve ever been. I’m very in love.”

“The key thing is, he respects me very much as a woman. He never puts me down,” the reality TV veteran continued.

“This person I’m with absolutely adores me and never puts me down – he doesn’t speak bad to me. I’m his Queen and we’re very happy.”

She added: “Obviously we’re 10 years older now but we’ve got such a respectful relationship. He adores every part of me, and more importantly, he respects me a lot. I wouldn’t be wish him if he didn’t. I’m in a very, very happy relationship.”