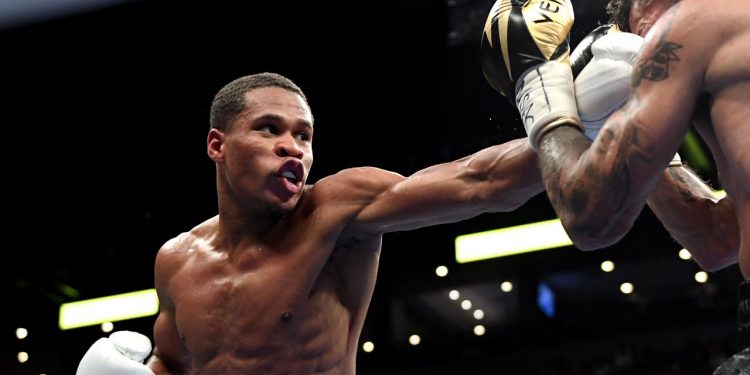 
Devin Haney has touched down in Australia and he’s come with a message to his Australian rival George Kambosos Jr: “Be ready, be ready”.

The undefeated American was in high spirits on Thursday morning, as his camp, excluding his father and trainer Bill, as they came through Melbourne Airport.

“He said I got cold feet but I’m here in Australia,” Haney said. “I said I would be, I stuck to everything I would do, and here we go.”

Watch one of the biggest boxing fights ever in Australia: George Kambosos Jr. vs Devin Haney, Sun 5 June with Main Event on Kayo Sports. No Kayo subscription needed to order. ORDER NOW >

There were fears that Haney would sensationally pull out of the June 5 blockbuster at Marvel Stadium after his father, Bill, was yet to have his entry visa approved, reportedly due to a prior drug conviction in 1992.

But rather than hurt his chances in Melbourne, some believe Haney will be spurred on even further without his father.

Nonetheless you would have been fooled into thinking everything was right as rain as his camp touched down in Australia.

“He’s in the best shape of his life, and he’s going to dominate the fight,” one member of Haney’s camp said of Devin.

“He’s just too strong for this kid. and we’ve put in the work.”

Another said Kambosos was going to be put to sleep, with Haney taking home the lineal, WBA, IBF and WBO belts.

“We are in Australia because we’re going to shock the world,” Haney’s camp said.

“We’re going to come back with four belts. We’ve got one now but that ain’t good enough. We want four, so how we going to do that? We’re simply going to destroy Mr George Kambosos from round one to when it done.

In a YouTube appearance on Trill Boxing TalkBill Haney said his son was prepared for this moment with or without him.

“I’m still at home in Vegas. I wasn’t able to board the flight to go over (to Australia)” senior said.

“They said my visa hasn’t been approved. It hasn’t been denied. At this point in time, I wasn’t able to go through customs.

“I do want the world to know, as a dad I’ve prepared Devin for this moment and doing what he does best — showing up and showing out. I’ve been preparing him for the day when he will no longer have me. I don’t have my dad, I lost him at the same age Devin is now. It was devastating to lose him, he raised a solid one. I can only hope that all the talks me and Devin has had, that he’s able to remember and to be the man I know that he is.”

Haney (27-0, 15KOs) will be trained by Yoel Judah — the father and head trainer of retired former two-division and undisputed welterweight champion Zab Judah — for the upcoming four-belt, undisputed championship.

Senior Haney, who says he has taken responsibility for his misdemeanour three decades ago, still hopes he can make it over next month for the bout.

‘He’s been overlooked’: Aussie boxing’s best kept secret gets his golden shot after big US gamble

But with the government attempting to be re-elected, it is unlikely any decision on his visa approval will be made before the May 21 federal election.

“That was the thing that puzzles me the most,” Haney said.

“I was always up front in terms of where I come from, being from Oakland where I made some mistakes I don’t want Devin to make. I made some mistakes at 22, 23, where Devin is now and hopefully he don’t ever have to make those mistakes I’ve made. Those aren’t the paths he wants to go down. I have a felony on my record that goes back to 1992. A federal drug conviction that I served time on.

“I was open and honest to our partners at Top Rank. Lou DiBella with DiBella Entertainment (Kambosos’s promoter) knew about this as well. We were hoping to get the support from the Australian government pertaining to it. Hopefully that will happen in the next day or two, a couple of weeks before the fight that I will be able to go.”

Watch one of the biggest boxing fights ever in Australia: George Kambosos Jr. vs Devin Haney, Sun 5 June with Main Event on Kayo Sports. No Kayo subscription needed to order. ORDER NOW >