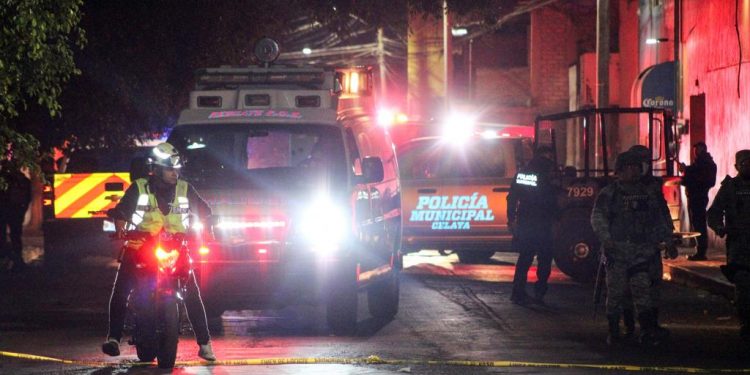 More than a dozen gunmen shot dead 11 people — including eight women — at a Mexican hotel and its two bars in a massacre being linked to cartel warfare, according to authorities and reports.

The coordinated attacks in the central Mexican city of Celaya saw more than 50 shots fired in an ambush that lasted less than a minute, witnesses told local TV station Telemundo 20.

Some of the estimated 15 hooded gunmen also lobbed Molotov cocktails in the bars, with one of the establishments badly burned.

Disturbing photos on social media showed women heaped in pools of blood between tables, with one body on the sidewalk.

Seven women and three men were pronounced dead at the scene, and an eleventh victim — another woman — later died in a hospital, according to security and government officials. As many as five others were injured, local reports said.

Pieces of cardboard with messages “alluding to a criminal group” were found at the scene, local security officials said in a statement.

Photos posted on social media suggested the killers were from the Santa Rosa de Lima gang — seemingly accusing the bars’ owners of supporting the rival Jalisco cartel, according to The Associated Press.

The bloodbath came just hours after three dismembered bodies were found nearby in plastic bags — also containing warning messages left on cardboard, according to Telemundo 20.

Guanajuato has become one of the most violent regions of Mexico in recent years, as drug gangs battle for control.

Government data show there were 993 homicides in the first four months of 2022 in Guanajuato, giving it the second-highest total behind the western state of Michoacan.

In March, the charred bodies of seven people were found abandoned in a pick-up truck in Celaya, Agence France-Presse noted.

And in January, six members of a family were murdered in a rural community in Guanajuato state — the fifth such attack in the municipality of Silao in four months.

Despite the troubling rise in gangland murders, President Andres Manuel Lopez Obrador has championed a “hugs not bullets” strategy, arguing that violent crime should be tackled by focusing on fighting poverty and inequality with social programs, rather than with the army.