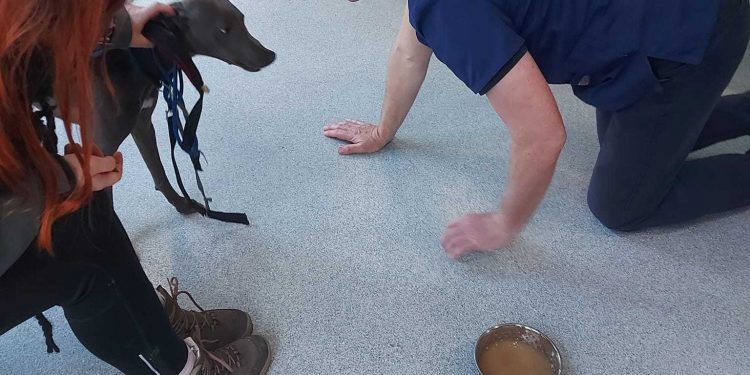 AN OSWESTRY charity has appealed for public help after reports of a greyhound in distress near Nesscliffe on Friday afternoon.

Hector’s Greyhound Rescue helps to treat, support and rehome dogs, and has made a second call for help to the general public to be its ‘eyes and ears’ after reports of an animal running alone.

Earlier this week, a whippet called Juno (pictured) had to be rescued off the A5 bypass near Mile End, while on Friday, another greyhound/lurcher was spotted.

“An urgent call has come through for a fawn greyhound/lurcher running scared on the A5 at Felton Butler roundabout by Nesscliffe.

“The dog is looking in poor condition and needs urgent attention.”

As of 4pm on Friday, there had been no further sightings of the dog in distress.

Regarding Juno, the charity said: “Thank you to everyone who became our eyes.

“This morning (Thursday) we caught the missing whippet Juno.

“She was on Oswestry by-pass by Mile End.

“We rushed her to the vets as she had a few knocks and scratches but is none the worse for it.

“Rob from Market Town Vets in Oswestry was amazing as we rushed her into him to be checked over.”

Anyone who can help locate the dog can contact Hector’s on www.facebook.com/Hectorsgreyhoundrescue

Meanwhile, the charity is celebrating after it was one of six rescue centres to be given a share of food totalling £8,000 from a leading pet food manufacturer.

The charity received a high number of nominations for the competition, run by Burgess Pet Care, which aimed to celebrate the work of rescue centres during the pandemic.

“Sadly, the pandemic has resulted in even more greyhounds and lurchers needing support at a time when rescues’ resources are stretched to the limit, as fundraising has been incredibly hard due to restrictions on activities.

“It is testament to the commitment of the people running the rescues that they have continued with their amazing work to rehome and support the health and happiness of these beautiful animals.”