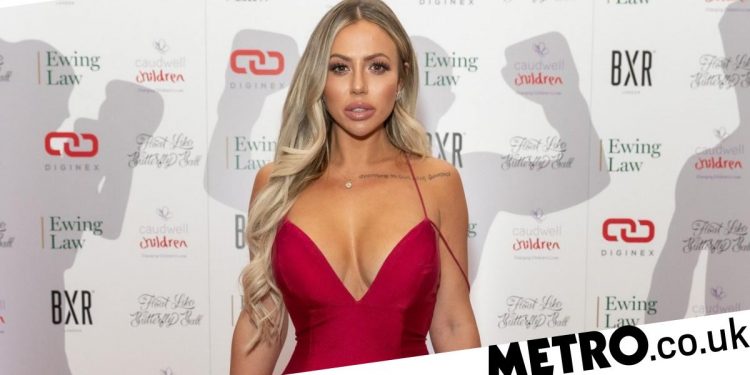 
Holly Hagan has spoken out on trolling on social media, discovering that a friend’s dad had been behind some awful messages she’d been receiving.

The Geordie Shore star said that, shortly after the show started in 2011, a Facebook page was set up, with vile messages being posted about her.

‘It was hard to read, there wasn’t such thing as an internet troll then. People were just saying it, they didn’t care,’ she said on the Should I Delete That? podcast.

‘They were making up all these rumours and saying really horrific things.’

Holly added: ‘I knew these people – one of them was my friend’s dad.’

She went on to say: ‘We’d go out drinking together when I got on TV all of a sudden they were saying these awful things about me.’

The star added that she wishes she’d had the role models available today, with plenty of women embracing the body positivity movement and celebrating their bodies exactly as they are.

Holly previously spoke out on body positivity, vowing to be more realistic to her Instagram followers.

The 29-year-old admitted that she ‘hasn’t enjoyed’ Instagram for a long time because of the pressure that comes with looking ‘insta ready’ and lacking confidence to share more meaningful content on her grid.

She wrote: ‘HOW TO LOSE 7LB IN 10 SECONDS! LOL just kidding ? The left is me posed breathing in, hips tilted back and of course my knickers pulled as high as possible! The right is me relaxed, hips tilted forward and knickers in a more comfortable position ?.’

Holly continued: ‘This year I promised to try to be more transparent with my photos and content. I only EVER show posed pics. And tbh I haven’t enjoyed Instagram for a long time because I’m never “insta ready”.

‘I love insta stories, I love Q&As I love giving content that either helps someone or means something. So I really need to bring that to the grid but I’d never had the confidence. I just wanted people to see me looking my best 100% of the time after fighting for years to not be “the fat one” you’re kinda scared to look anything other than your best.’

Reminding fans that Instagram isn’t always what it seems, Holly concluded: ‘But nobody looks how they do on Instagram all of the time. We can’t pose breath in tilt hips 24 hours a day. So when you see someone on insta who you’re envious of remember it’s all smoke and mirrors ✨.’


MORE : Holly Hagan speaks out on Geordie Shore treatment: ‘You don’t recognise how bad something was until you’re out of it’


MORE : Holly Hagan vows to be more ‘transparent’ on social media and ditch unrealistic body pose as she calls out influencer culture