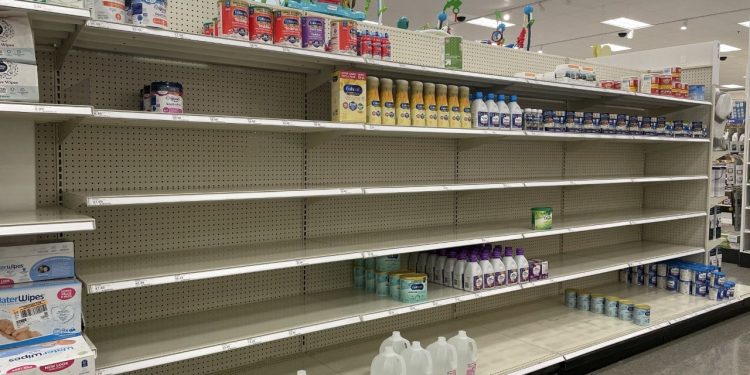 House Appropriations Committee Chairwoman Rep. Rosa DeLauro, D-Conn., is addressing the ongoing baby formula shortage afflicting the nation, introducing an emergency measure that would provide $28 million to the FDA to deal with the crisis and prevent future ones.

The supplemental appropriations bill also seeks to keep fraudulent items out of the marketplace.

“The stories of mothers and fathers struggling to find formula and the images of empty store shelves are heartbreaking,” DeLauro said in a statement. “Parents and caretakers across the country cannot wait – they need our support now. This bill takes important steps to restore supply in a safe and secure manner.”

Rep. Nancy Mace, R-S.C., discusses the baby formula shortage as Abbott Labs and the FDA reach a deal to reopen the plant, the White House being challenged on raising taxes on corporations and Biden’s presidency.

DeLauro’s office said in a press release that the funding would help the FDA “acquire better data on the infant formula marketplace,” and that the bill “strengthens the workforce focused on formula issues, and increases FDA inspection staff.”

The FDA has announced it will take “important steps” to remedy the country’s formula supply chain after American parents and pediatricians made their concerns known about the current shortage.

BABY FORMULA BY THE NUMBERS: FACTS ABOUT THE MULTIBILLION DOLLAR INDUSTRY

“We recognize that many consumers have been unable to access infant formula and critical medical foods they are accustomed to using and are frustrated by their inability to do so,” said FDA Commissioner Robert M. Califf, on Tuesday, May 10. “We are doing everything in our power to ensure there is adequate product available where and when they need it.”

Abbott, the nation’s largest formula manufacturer, closed down its Sturgis, Michigan, plant and issued recalls on certain formulas amid an FDA investigation earlier in the year following complaints that four infants who consumed formula made at the plant became ill with bacterial infections. Two of the babies died.

The company maintains that after reviewing both internal and FDA test data, there is no evidence linking the babies’ illnesses to their formulas.

While they are working toward getting that plant operational again, Abbott said they are prioritizing formula production at other plants, such as those in Columbus, Ohio, and Cootehill, Ireland