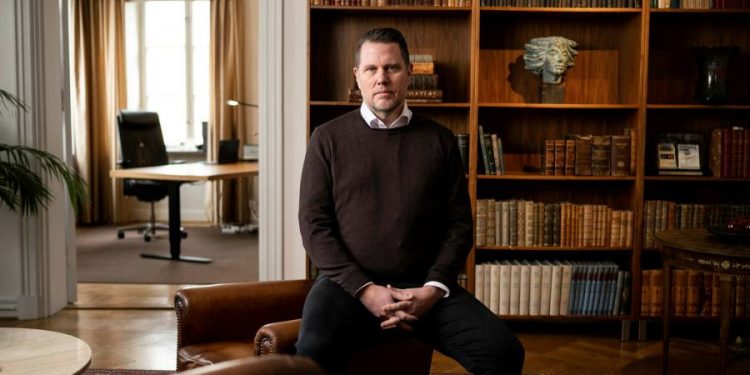 
Lars Wingefors’ 13-year-old self would approve of his recent purchase: Dark Horse Media, one of the biggest independent comic studios in the world and home to iconic titles including Hellboy and Sin City.

Thirty years ago, while studying at a secondary school in Sweden, Wingefors started selling second-hand comics and by 18 he had dropped out of sixth form to focus on his fledgling mail-order business.

The Dark Horse acquisition, completed last month for an undisclosed sum, was part of a three-year buying spree that has transformed Embracer Group from a small and obscure PC games developer into the largest gaming company in Europe by market capitalisation, valued at Skr93bn ($9.9bn).

“I think we’ve built something truly unique that is very hard to replicate,” said Wingefors, Embracer’s founder and chief executive who owns a 23 per cent stake.

Dealmaking has risen sharply in the gaming sector since the start of the pandemic. Big tech and entertainment companies have sought to lay claim to a limited pool of talent and intellectual property and expand their exposure to an industry that already dwarfs other forms of mass-market entertainment.

Rebranding his company from THQ Nordic in 2019 to embrace a new era of consolidation, Wingefors has been one of the most deal-hungry executives in the sector, seeking to grow his empire into a formidable rival to Ubisoft in France, Take-Two Interactive and Electronic Arts in the US.

Since the start of 2020, as Wingefors has flown around Europe on his private jet meeting gaming entrepreneurs, he has made 62 acquisitions at a total value of SKr77bn ($8.1bn). The largest was a €2.75bn acquisition of French board game company Asmodee in December.

But Wingefors, who is famous for his light touch approach to integrating acquired businesses, faces a mammoth task of managing such a vast and sprawling empire, spanning different genres of interactive entertainment. The constantly evolving Embracer already poses challenges to investors and analysts trying to measure its value against peers.

“With the best will of the world, Lars can’t know what’s going on, it’s impossible to keep track of the thing,” he added.

In its latest financial report, for the third quarter of 2021, Embracer reported a 135 per cent increase in net sales to Skr5bn compared with a year earlier, and a 70 per cent rise in earnings before interest, tax, depreciation and amortisation to Skr1.5bn. It also reported 16 per cent organic growth in its games division, irrespective of recent acquisitions.

Ken Rumph, a gaming analyst at Jefferies, described Wingefors’ strategy as “anti-synergies” and “aggressively decentralised”, which has set it apart from other highly acquisitive companies in the sector.

“It’s just a kind of fund of video studios bundled together,” he said, adding that at times Wingefors has seemed “bizarrely relaxed” in his dismissal of the need to find ways to synthesise his businesses when there are obvious overlaps.

But Wingefors believes “it’s not that difficult” to manage a complex and growing web of 112 entertainment studios across Europe, highlighting the value he places on selecting “entrepreneurs with a successful record” and leaving them to it.

“From a commercial standpoint, we don’t have central, commercial decision-making,” he said. “Looking at other companies, they’ve struggled when they put too many layers of directors and management and start controlling creators, that’s when they start falling apart.”

Dealmaking in the gaming sector has increased over the past decade, reaching a record high this year in terms of deal value, bolstered by Microsoft’s acquisition of Activision Blizzard for $75bn and Take-Two’s acquisition of Zynga for $12.7bn.

The hunt for strong gaming titles and successful studios has made the landscape fiercely competitive.

But in a hit-driven industry, Wingefors has taken a more scattergun approach than his rivals. Embracer has bought up smaller studios that make lesser known games, rather than blockbuster deals favoured by companies like Sony, Tencent and Microsoft. Embracer’s roster includes the loot shooter game Borderlandsthe street gang adventure series Saints Rowand Goat Simulator, in which players simulate the life of a goat.

“If you can make one game, you have a big business risk but if you make 200 games, like we do, the business risk is less,” he said.

This strategy cuts both ways, also reducing the risk of Embracer being eaten up by a bigger fish on the hunt for so-called AAA games, the gold dust of the dealmaking frenzy.

The partial return to normality following the worst period of the coronavirus pandemic, and the outbreak of war in Ukraine, have both somewhat dented investor appetite in the sector, with most companies having seen significant declines in their share price over the past year.

Nonetheless, Staffan Ekstrom, a partner at EY’s investment banking arm that has worked on most of Embracer’s deals, is confident the pace of dealmaking is likely to intensify, as the battle for strong games and new technologies heats up.

Wingefors said he plans to make a similar number of acquisitions in the months and years ahead, and will be looking to expand into newer markets, including the burgeoning area of free-to-play games, as well as countries like the UK, the US, Poland, France and China.

But while it is clear that Embracer’s acquisitive strategy was well tuned for gaming’s boom times, it is less obvious whether Wingefors will be able to lead his disparate empire to new heights through a period of greater market turbulence. Embracer is heavily exposed to the effects of the war in Ukraine, with 1,000 employees in Russia, 250 in Belarus and 200 in Ukraine, many of whom work on game development.

For Jefferies’ Rumph, Embracer’s “success could just be an accident of timing”.