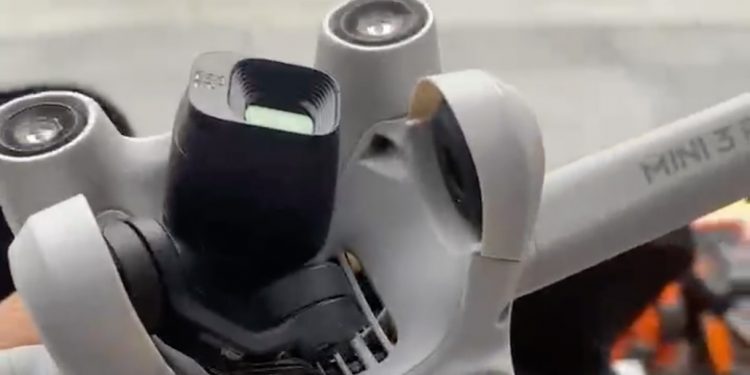 
The DJI Mini 3 Pro has finally broken cover after months of rumors and appeared in a leaked a video that gives us our first clear look at the exciting beginner drone.

The video below, published up by @DealsDrone on Twitter, shows what looks like a Mini 3 Pro, and helps answer a few questions about the long-awaited flying camera.

Just like the DJI Mini 2 it’s expected to succeed, a label on the base of the Mini 3 Pro shows it will tip the scales at just under 250g. That’s important because in many regions you’re allowed you to fly sub-250g drones without needing to register them with local aviation authorities.

But while it only weighs a few grams more than the 242g Mini 2, the DJI Mini 3 Pro appears to have plenty of new features to justify that new ‘Pro’ moniker.

On the front, there’s a redesigned three-axis gimbal to keep footage smooth, which puts to bed rumors that it might instead switch to a more electronic-based form of stabilization. This gimbal design looks unusual in the videos, with an attachment on only one side, but this will likely allow it to support vertical video.

This gimbal holds a camera that has a far brighter f//1.7 lens than the f/2.8 Mini 2, which should help improve its low-light performance. Judging by the markings on the front of the lens, it seems to have the same 24mm focal length, though.

One of the main drawbacks of super-compact drones are their battery lives, but the DJI Mini 3 Pro should offer a big improvement here. The leaked video shows it’ll have a 2,453mAh battery, which has around 10% more capacity than the one of the Mini 2. This means we can expect an official flight time of around 35 minutes.

Perhaps the biggest new additions on the Mini 3 Pro, though, are its new sensors. The leaked video shows the drone will have large front and ground sensors to help with obstacle avoidance.

This would be a big improvement over the DJI Mini 2, which lacks any obstacle avoidance to help it navigate around trees in flight. The Mini 2 only has ground-detection sensors of its underside (which aren’t for obstacle avoidance) and lacks any front sensors, despite the inclusion of vents on the front.

There are still a few details we don’t yet know about the DJI Mini 3 Pro, including its sensor size, frame-rates, inclusion of software features like ActiveTrack and whether it will indeed come with a new controller (a kind of stripped-down version of the DJI RC Pro), which appeared in some earlier leaked packaging.

These questions will likely be answer in the near future, with the DJI Mini 3 Pro expected to officially land within the next few weeks.

This DJI Mini 3 Pro leak shows the compact drone will likely fix the main weaknesses of the already excellent DJI Mini 2, namely a lack of obstacle avoidance, a limited battery life and an aging camera. But how much will these features add to the cost?

Unless DJI is also planning to release a standard Mini 3, the addition of ‘Pro’ to the name suggests this new drone will be a more premium option to sit alongside the Mini 2, which costs $449 / £419 / AU$749.

Despite the likely price bump, the Mini 3 Pro is an exciting drone for both beginners and seasoned photographers. Its 249g weight and size would make it ideal for taking on hikes or landscape photography trips, with its sensor size expected to increase to a 1/1.3in CMOS chip (up from 1/2.3 inch on the Mini 2).

The inclusion of obstacle avoidance is also a big deal for beginners, as it should make the drone far more usable out of the box and when flying in DJI’s automated modes.

What isn’t yet clear is how DJI plans to differentiate the Mini 3 Pro from its more premium drones. But the inclusion of that ‘Pro’ name suggests it’s simply made the best mini drone it can – for a price.

Building work: how to avoid driving your neighbours up the wall | Home improvements

Building work: how to avoid driving your neighbours up the wall | Home improvements