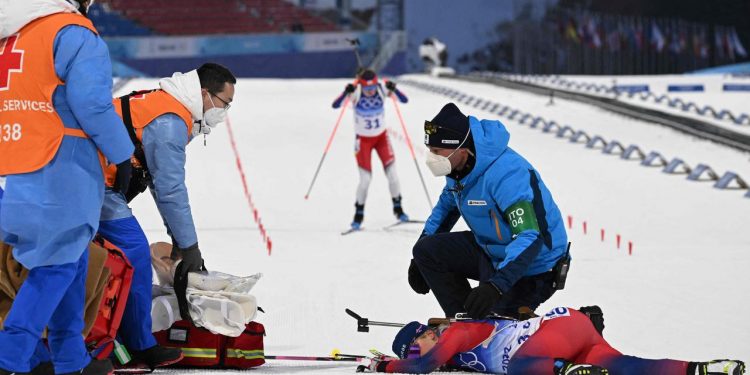 
A Norwegian Olympic athlete collapsed from exhaustion seconds after a Eurosport commentator had inaccurately declared her the bronze medallist in the 10km biathlon, a sport that combines cross-country skiing and rifle shooting.

Just as she became on track to medal, Ingrid Landmark Tandrevold fell to her exhaustion.

At first, she remained stationary, being passed by other athletes.

Eventually, Tandrevold managed to begin skiing again, and was on track to be in 14th place just as she had her terrifying tumble right at the finish line.

When the 25-year-old hit the ground, her fellow athletes rushed to her aid. She was treated by medics on the snow before they carted her away.

Norway team doctor Lars Kolsrud told the press that Tandrevold was upset about what had occurred, and it was caused by exhaustion.

US Olympian blasted as ‘traitor’ on Chinese social media

“She went empty on top of the hill and hardly got to the finishing line. When she got there, she was very sad and sorry, because she lost this medal and she was all empty for power,” Kolsrud said.

“She was not unconscious but she was very, very exhausted. She said nothing except: ‘I’ve spoiled everything.’”

Following her collapse, Tandrevold told the press on Monday that she would be returning to Norway and that she was ruled unfit to compete.

“I just think I pushed my limits in the altitude and in a tough race, but since I’ve had issues with my heart earlier in my career, we need to be careful and we need to check it out further,” she said, per the Associated Press.

“I’m not allowed to compete more in these Olympics so I will go home to Norway.”