Eight million people in the UK take statins every day. But could inhaling them rather than taking them in pill form prevent common side-effects?

Statins, one of the most widely prescribed drugs, are taken to reduce levels of ‘bad’ LDL (low-density lipoprotein) cholesterol in the body.

When it builds up in the blood, LDL cholesterol can cause hardening or narrowing of the arteries, potentially increasing the risk of heart disease or stroke by about 25 per cent (although some studies have questioned the link between LDL cholesterol and heart disease).

A normal LDL reading is three or below. Anyone with a higher level, or who is considered to be at raised risk of heart disease, is likely to be recommended statins. Studies have shown that the drugs lower LDL cholesterol by about 30 per cent, by slowing its production in the liver. 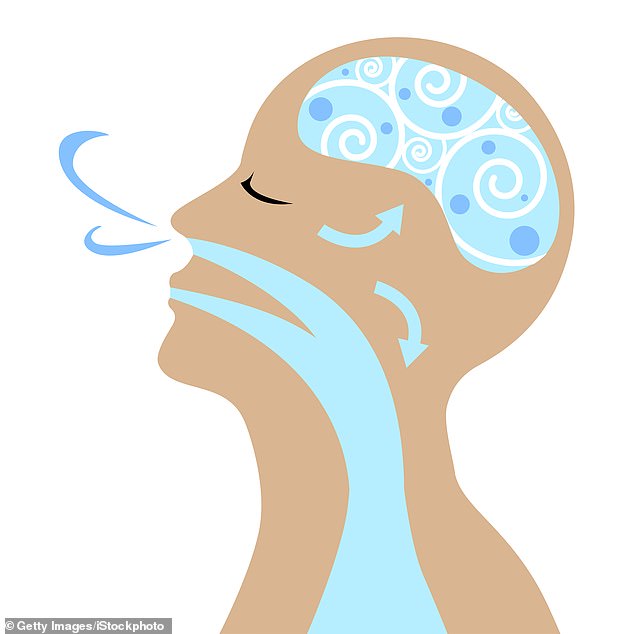 Inhaling Statins instead of taking them as a pill could stop common side-effects, say researchers at the University of California, Davis (stock image)

But like any drug, they can cause side-effects, notably muscle aches and weakness. These effects, experienced by about one user in 20, are thought to be caused by inflammation and muscle damage — and because of them, about 30 per cent of patients prescribed statins stop taking them.

New research by doctors at the University of California, Davis, in the U.S., proposes a way to circumvent these side-effects. They suggest that if statins are not taken as tablets but inhaled, the dose given can be ‘much, much lower’.

This is because when the drugs are administered through an inhaler-type device, they are absorbed through the thin membranes of the lungs and can get into the bloodstream and circulate far faster than by going through the digestive system.

Furthermore, they say, if statins are taken in the traditional way, some of the dose is ‘lost’ in the lengthy digestive process.

A lower, inhaled dose could reduce the likelihood of side-effects including muscle aches, liver problems and drug interactions, according to Dr Amir Zeki, an expert in pulmonary and critical care medicine who carried out the new research. ‘This could be the way ahead,’ he said. ‘It could open up the drugs to groups of patients who currently can’t take them.’ 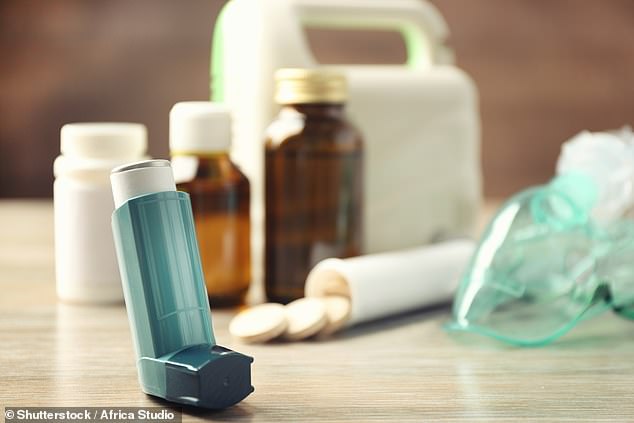 If statins are taken in the traditional way, some of the dose is ‘lost’ in the lengthy digestive process (stock image)

Medications that are inhaled are already used for respiratory conditions such as asthma and chronic obstructive pulmonary disease (COPD), the umbrella term for lung conditions that cause breathing difficulties.

The idea is that this technique gets the drugs straight to the lungs, where they are needed, bypassing the rest of the body.

However, inhaling statins poses some challenges, says Dr Iqbal Malik, a consultant cardiologist at Imperial College Healthcare NHS Trust, in London. ‘The whole point of inhaled drugs is that they don’t get high doses into the blood. To achieve an inhaled dose to match the standard atorvastatin 80mg orally a day, for example, is a big ask.’

Dr Malik suggests that newer oral drugs, which might be taken once a week or once a month, ‘might be a better bet in terms of compliance’.

Other options for reducing cholesterol are the drug ezetimibe — which works in a different way to statins, reducing the body’s absorption of cholesterol from the diet — and injections which need to be given just twice a year.

These jabs inhibit production of the PCSK9 protein in the liver. As a result, the liver cells can absorb and process more LDL cholesterol, so less finds its way into the blood.

‘This new and revolutionary approach gives patients the opportunity to reduce their LDL cholesterol by half with only two injections a year,’ says Walter Speidl, a cardiologist from Vienna General Hospital, in Austria, where last week the treatment was used outside clinical trials for the first time in the world. Given alongside statins, the jabs can lower LDL by more than 80 per cent, he says.

Christian Hengstenberg, head of cardiology at the hospital, adds: ‘We believe this new drug has the potential to become one of the most widely prescribed drugs in the world and will revolutionise lipid management.’

LED lights could help to disinfect surfaces from viruses such as Covid-19.

Scientists from Tel Aviv University, in Israel, have found that 99.9 per cent of coronaviruses can be destroyed in half a minute by a light wavelength of 285 nanometers — found in widely available light bulbs.

While more research is needed, they suggest that the technique could be developed to help keep public spaces virus-free.

According to Professor Chris Gale, a consultant cardiologist at the University of Leeds, new cholesterol-lowering drugs are an ‘exciting area of research’ which will develop over the next few years, offering patients with or at risk of cardiovascular disease more treatments.

Meanwhile, Dr Zeki and his team, who have been carrying out research into the use of statins to treat lung conditions since 2007, are looking at using statins to treat patients with Covid-19 infection, as they are thought to inhibit the mevalonate pathway, a key metabolic process in the body.

The theory is that by partly blocking this pathway, statins can dampen lung inflammation and so reduce the severity of Covid-19.

A study last year at the University of California San Diego, published in The American Journal of Cardiology, looked at 170 patients who had been admitted to hospital with Covid-19. It found that those taking an oral statin before admission were 50 per cent less likely to develop severe Covid, and also recovered faster.

A second study of nearly 14,000 coronavirus patients in China, published in the journal Cell Metabolism, found that the risk of death after 28 days was 5.2 per cent among those taking statins, compared with 9.4 per cent in those who were not.

However, while being on oral statins at the time of diagnosis with coronavirus appears to offer a significant benefit, no research has looked at statins as a treatment for the virus.

Dr Zeki believes changing the way the statins are delivered — by inhaling them — could make them effective against the virus. His team has tested this approach on animals and found that inhaled statins were ‘well-tolerated and with beneficial effects’ — and the goal is for human trials with Covid-19 patients to start later this year.

‘Our initial focus will be to treat hospitalised patients to prevent progression to respiratory failure,’ says Dr Zeki.

‘There is also long-term potential to develop treatments for those with mild symptoms.’ From there, the team plans to extend its research to statin use for lowering cholesterol.

Personal trainer Sophie Allen, 31, answers the most common questions she is asked