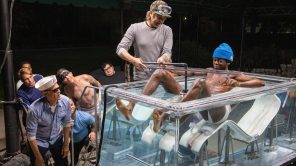 
Saturday Update: A $10M movie based on a 22 year old reality TV series is decimating a $146M production based on a fatigued disaster movie genre this weekend. More to the point, Paramount’s Jackass Forever is rallying to a $20.7M No. 1 weekend win, well ahead of Lionsgate/Centropolis’ Roland Emmerich movie Moonfall which is earthbound at $9.1M.

Such disparities is what make the movie business, and box office, endlessly intriguing. One would think both of these movies would be prime for streaming, or the theatrical day-and-date model. ViacomCBS needs to trick out their own Paramount+ streaming service, while we already knew pre-pandemic that disaster movies about falling NYC edifices and eroding West Coast shorelines weren’t working pre-pandemic (Hello, Geostorm‘s $71.6M loss after all ancillaries, which carried a similar pricetag as Moonfall‘s).

However, despite all the noise back in the fall that Paramount was disbanding theatrical in the switch off between studio bosses Jim Gianopulos and Brian Robbins, that is clearly not the case. Paramount at this point knows the power of brand, and how theatrical is essential for launches, Jackass Forever repping their third No. 1 opening film of the pandemic after A Quiet Place Part II and Scream.

In regards to the success of Jackass Forever, let’s talk about an IP that speaks to the TikTok mob. Social media analytics corp calls Jackass Forever “the pre-social media franchise which was the extreme sports inspiration for the era of user-generated content in the YouTube, Vine and now TikTok ecosystems.” Smart on you, Paramount.

Furthermore, none of the creators here had in-home intentions, not team Jackass or Emmerich. Specifically in regards to Moonfall, which was funded largely by foreign sales via AGC Studios and CAA Media Finance, as well as China’s Huayi Brothers, there was no way offshore buyers were going to allow that movie to become unwound into a sell-off to streamers, not to mention, as I understand, they won’t stand for such pandemic shenanigans any more.

Despite Moonfall‘s misfire here, realize that theatrical is always the bigger advertisement for home entertainment and airplane-viewing. Realize as well, that Moonfall was greenlit for a pre-pandemic offshore marketplace (Geostorm made 85% of its global $221.6M abroad), not stateside. However, because of restricted seating and closures in certain territories, the outlook for Moonfall overseas isn’t promising. The movie will get a China release date, however, U.S. product is already hobbled over there due to our country’s broken business relations with the PRC.

Jackass Forever gets a B+ CinemaScore, which is the same grade as Jackass 3-D and Jackass Number Two, and just under the original 2002 Jackass movie which received the franchise’s best grade, an A-. In Screen Engine/Comscore PostTrak exits, Jackass Forever gets an 86% positive and solid 67% definite recommend. This next to Moonfall which runs out of oxygen with a C+ CinemaScore (lower than the B- earned by Emmerich’s former creative partner Dean Devlin’s Geostorm), and a lowly 66% positive on PostTrak and 49% recommend.

Jackass Forever played to 68% men, 32% women with close to 80% under 35, and 70% falling between 18-34 year olds. Diversity demos were 53% Caucasian, 31% Latino and Hispanic, 6% Black and 10% Asian/other. Jackass was thunderous in the West where nine out of the top ten theaters and 43 out of the top 50 made moolah. The seven other theaters in the top 50 were from the Southwest.

RelishMix observed a largely positive word of mouth for the movie on social media  which reached over 145M heading into the weekend with shoutouts to “memories of Jackass over 22 years, Johnny Knoxville’s physical journey — plus many, many call-outs for former side-kick, Bam Margera, who fans miss. The battle cry echoes, ‘Fail to prepare, prepare to fail’”.

We had heard that Lionsgate was on the hook for $35M in P&A for Moonfall, and spend they did, especially on social media and online ads. I couldn’t play a straight game of Wordscapes without being interrupted by an ad with John Bradley’s bobbing head every two minutes. Still, RelishMix observes that online chatter “ran mixed to negative” while “awareness stats ran under norms” for the original sci-fi astronaut IP. Moonfall had a social media reach of 88.9M with view counts of 51.1M on YouTube, with an overall 31 video posts including Omega and Lexus brand spots.

Social media surfers “questioned the use of the Space Shuttle which has been out of commission since 2011, and chatted about rumors that the movie was heading straight to Netflix while fans speculated whether Jackass will overshadow Moonfall,” says RelishMix. While the studio dropped the first-five minute opening sequence in mid-December (and also showed that off at CinemaCon back in August) traction ran thin. Moonfall director Roland Emmerich is drawing flack online, says RelishMix for “‘hating Earth’”.

Sony is settling for third place with Spider-Man: No Way Home in weekend 8 with $8.8M and a $748.1M total by Sunday, now $12.4M away from becoming the third highest grossing movie of all-time stateside, and beating Avatar‘s $760.5M.

There still isn’t a middle at the weekend box office even as Omicron eases with all titles making around $55.8M, +60% from last weekend’s lack of wide entries and Winter Storm Kenan shuttering Northeast cinemas. Reported Covid cases dropped 38% this week with the CDC reporting the 7-day rolling average at 378k new cases per day.  Hospitalizations declined 18% to 16.7k new admissions a day.

The Jackass take is higher than Jackass Presents Bad Grandpa which did $1.4M from 10PM showtimes in 2013, and just under the $2.5M midnight preview take of Jackass 3D. It remains to be seen how frontloaded Jackass Forever is; projections see the film with a mid-teens No. 1 take this weekend, unseating Spider-Man: No Way Home. In addition to Thursday night previews, Jackass Forever had an AMC Investor Connect screening on Tuesday. With 74 reviews on Rotten Tomatoes, critics love Jackass Forever at 89% fresh.

As for Moonfall, the Centropolis independently financed movie began showtimes at 6 p.m. yesterday, and had some paid previews last weekend in addition to an AMC Investor Connect booking as well given how the major studios sat on the sidelines last weekend with no new titles. Note that it is not receiving a release in Canada this weekend as its local distributor pulled the film weeks ago during the Omicron surge that closed theaters in Ontario and Quebec; Ontario recently reopened.

Overall, round 300 movie theaters were closed yesterday in the Midwest due a winter storm.

Projections have been wild for the latest Emmerich-directed title, swinging from $8M to north of $13M,with Thursday’s numbers not boding well. Critics are sour on Moonfall at 42% Rotten, though there are some notable ones which are enjoying the pic’s camp such as Variety, Los Angeles Times and Deadline‘s Pete Hammond.

Moonfall wasn’t dinged as much as Geostorm, the 2017 disaster movie from Emmerich’s former creative partner Dean Devlin, which suffered a 17% Rotten rating. Warner Bros didn’t even hold Thursday night previews for that movie, which had a budget around $130M+ and tanked at the weekend box office with a $13.7M start, finaling at $33.7M. Eighty-five percent of Geostorm‘s $221.6M worldwide ticket sales came from overseas.

Among regular movies, Sony’s Spider-Man: No Way Home led yesterday with an estimated $715K at 3,675 theaters, ending its seventh week with $14.4M and a running total of $739.3M. The Jon Watts-directed MCU title is $21.2M away from beating James Cameron’s Avatar, which is the third highest-grossing movie at the domestic box office with $760.5M.

We’ll have more updates for you as they come.